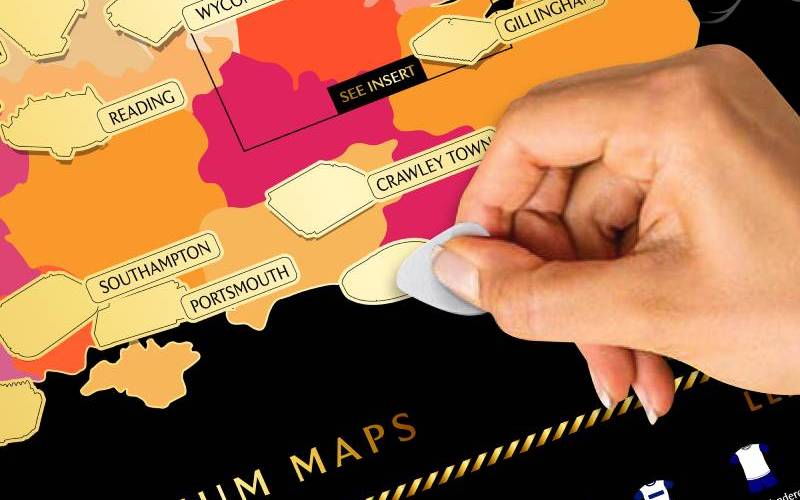 Football fans love to took about which grounds they’ve visited. Indeed, it’s such a point of pride that you even get devoted “groundhoppers” scouring the country (and beyond) in order to visit little-known stadia at the lowest echelons of the footballing pyramid.

And while keeping a note of your conquests in a little black book may hold certain appeal, the increasingly popular football stadium scratch-off posters enables you to display them in all their glory.

Even if you’re not someone who gets to games regularly, these Scotland, Germany, Netherlands and England football stadium maps are a brilliant way of learning where grounds are in relation to each other, what they look like and who plays there.

Handily made by ‘Football Stadium Maps’, the new and updated versions for the upcoming 2021-22 season are out on June 9 after some hugely successful results with their first batch in 2020-21. So, what makes them such stand-outs?

As they say on their website, “Football Stadium Maps was set up by football fans to track which teams they had seen and which stadiums they had visited across each countries football Leagues.

“It started off as an idea over a drink in the pub. Fast forward six months and the first rough version of the map was ready. Multiple refinements later and the final design of the map was printed and went on sale.”

They look great, fit nicely onto your wall and are a more interesting, innovating way of keeping track of the grounds you’ve seen and remembering your trips there. As I scratched off Leicester’s King Power Stadium, for instance, I couldn’t help but think about the time Gylfi Sigurdsson’s stunning winner at the Foxes’ ground for my team, Everton, sent me flying into the row in front and lost me my glasses in the process. Good times…

How do they work, you ask? Well, for any ground you want to scratch off, there’ll be its stadium shape next to the name of the club. Scratching the stadium shape will reveal the ground in all its colourful glory, while scratching the name will also turn it glossy black and gold.

There are also replica kits at the bottom of the maps for you to scratch and reveal, just to add that little bit extra vibrancy to the poster.

Just don’t make the same mistake I initially made and stupidly tick some of the shapes of the stadiums I’d visited. There’s far more of it to explore than just doing that…

You’ve also got a ‘Fan-ometer’ to judge yourself against on the side of the map, which really separates the wheat from the chaff as far as match-goers are concerned.

The 2020-21 England football stadium map has rested proudly on my wall this season, even if I unfortunately haven’t been able to add to the initial scratches, with what there being a pandemic and all.

Once I realised I was doing it wrong (entirely my fault), there’s a lot of fun to be had with it, as I scratched away to reveal some excellent hand-drawn images of these grounds with pinpoint accuracy.

The 92 teams in the top four tiers of the English football pyramid make up this map which, at 85 x 59 cm, may seem overwhelming, but for me anyway has proved just the right size. Here’s my copy on my wall:

Other useful things to know about the English map, and indeed the other three maps, too:

As for the Scottish version, you get the 85 x 59 cm black and gold design, with stadiums and kits of the teams in Scotland’s highest four leagues to keep track of. There’s also a nice corner coloured in tartan, too – that shouldn’t be unmentioned…

For the German model, you get the 85 x 59 cm black and gold design, with stadiums and kits of the teams in Germany’s top three tiers to scratch off and reveal.

On the side, you also get a chart of the players with the most Bundesliga appearances, as well as the top Bundesliga scorers, so you can learn while you scratch with this one.

And finally, on the Holland map, you get the 85 x 59 cm black and gold design, with stadiums and kits of the teams in the Netherlands’ highest two leagues to scratch off and reveal.

How Big Is It?

81 x 59 cm – which is A1 size. As mentioned earlier, that might sound a lot, but from my experience anyway, makes for a nice, snug fit on my bedroom wall.

How to Attach to Wall

Each poster is delivered with ready-to-hang adhesive strips to attach it to your wall with. You can also buy an additional hanger if you so wish.

How to Scratch Off Grounds

The maps are available for £19.95 each, while if you want to treat yourself to a hanger to help mount it, they’re available at £4.95.

If you want to bring your experience as a football fan that little bit more to life on your wall, these poster maps really are the perfect gift.