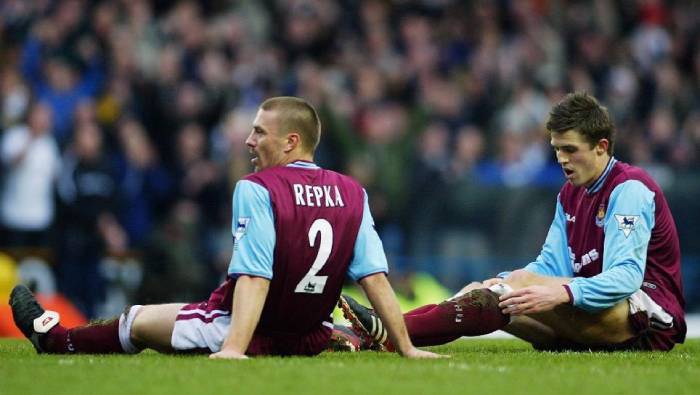 Some clubs don’t really live in the Premier League. They just exist within this most lavish of ecosystems, essentially waiting to be relegated and have the money tap turned off.

But not every side that’s been demoted from the top-flight to the Championship could see their peril coming. Here, we’re taking a look back at five surprise Premier League relegations, and how they came to bite these clubs firmly on the backside:

‘Too good to go down’ is a trite, overused in today’s football vernacular. But if ever there was a relegated Premier League side which that applied to, it was probably Glenn Roeder’s West Ham team of 2002-03.

Having finish seventh in Roeder’s first term in charge the previous year, and with a mouth-watering team boasting the likes of Jermain Defoe, Paolo Di Canio, David James, Joe Cole and Michael Carrick, hopes were rightly high that the Hammers could kick on again and challenge for European qualification. How wrong they were.

A meagre return of two points from the opening six games, which began with a 4-0 thrashing at Newcastle, set the tone for an abymsal season. From the moment they dropped back into the bottom three with a 4-3 home defeat to Leeds on November 10, West Ham spent only one matchday out of the drop zone for the rest of the season.

A 1-0 win over Middlesbrough in April, the first of four remaining games, kept faint survival hopes alive, but then Roeder’s collapse due to a brain tumour, from which he made a full recovery, saw Hammers legend Trevor Brooking take the reins for the final three matches.

Brooking presided over an unbeaten end to the season, winning two and drawing one, but it was not enough to prevent one of the most ignominious relegations of the modern era. West Ham’s points haul of 42 remains the most since the Premier League became a 38-game season not to stay up, but that was no consolation for a side who had harboured such high hopes nine months earlier.

“That team should have been easily competing for top six, top seven,” midfielder Don Hutchison has since reflected. “To this day it’s still a mystery how we went down.”

A similarly shocking demise occurred at Elland Road the following season when Leeds, just three years after contesting a Champions League semi-final, were relegated back to the second tier for the first time since 1990.

Like West Ham, Peter Reid’s men were blessed with a wealth of talent; from Paul Robinson in goal to James Milner and Jermaine Pennant on the wing, to Mark Viduka and Alan Smith up front, this squad should have comfortably survived at the absolute minimum.

But after a disappointing 15th-placed finish last time out, Leeds already appeared on a downward trajectory, and the worsening of their financial crisis, which saw their debts rise to roughly £100 million, only dampened moods further. Harry Kewell, Olivier Dacourt and Nigel Martyn had all left in the summer, and so too did Reid in November after a 6-1 drubbing at Portsmouth and a dismal return of eight points from their first 12 league games.

And much like Brooking at West Ham, another beloved club icon in Eddie Gray stepped in on a temporary basis. But after an initial bounce, Gray ultimately made little impact, with a run of six successive winter defeats cutting Leeds adrift. From the moment Leeds entered the drop zone in October following a 3-1 defeat at Liverpool, they never escaped.

Of course, it then took Leeds 16 tumultuous years to return to England’s top table; from the disaster of administration, to relegation to League One, to Steve Evans, Massimo Cellino, Dave Hockaday and all points in-between, Marcelo Bielsa and his dazzling, meticulously-planned football finally led them back to the promised land in 2019-20.

There will, by now, be an entire of generation of football fans who have only ever known Newcastle as a middling-at-best, dysfunctional club hell-bent on writing one tragicomedy after another.

But there was a time, particularly under Kevin Keegan, when the Toon Army were Premier League title contenders, a force in Europe and, above all else, a well-run outfit.

So when Keegan returned in January 2008 and steered them clear of trouble to finish 12th, the city should have been brimming with optimism ahead of ‘King Kev”s first full season back in charge. Unfortunately, an irreconcilable fallout between Keegan and the Mike Ashley-led board saw him quit three games into the season.

The bizarre appointment of Joe Kinnear, a man whose last stint in management was a brief spell at Nottingham Forest in 2004, only confused matters further. Despite possessing the likes of Obafemi Martins, Michael Owen, Damien Duff and Fabricio Coloccini, Newcastle seemed destined for another battle to beat the drop.

Kinnear stepped aside in February 2009 due to heart problems, and after Chris Hughton and Colin Calderwood failed to win any of their next five games in caretaker charge, the club made another shock move in turning to the greatest goal scorer, Alan Shearer, despite him having no previous managerial experience.

Shearer, though, could not halt the decline. Newcastle won only one of their final eight games with him in charge, and a 1-0 defeat at Aston Villa saw Newcastle suffer the embarrassment of relegation for the first time since 1989.

To see Birmingham relegated in itself should not come as much of a shock; the club have yo-yoed between the top two divisions for much of the last 30 years and have suffered demotion to the Championship three times since the Premier League’s inception.

But given the context surrounding it, their 2011 drop felt was particularly eye-opening. Promoted two years prior under Alex McLeish, the Blues ended up ninth in 2009-10, their highest Premier League finish to-date, and after recruiting the likes of Ben Foster, Nikola Zigic and Jean Beausejour the following summer, looked well on their way to becoming a top-tier staple.

They then won the League Cup in February 2011, as Obafemi Martins’ late winner against Arsenal at Wembley delivered their first major trophy for nearly 50 years. But then the malaise really began to set in.

Birmingham had 12 league games left after that triumphant day out at Wembley, but won just two of them as a sense of complacency proved irreversible. With six games left, they were still 14th, but in picking up just a solitary point from these matches, slipped into the bottom three on the final day.

McLeish then angered Blues fans by leaving for bitter rivals Aston Villa three weeks after presiding over his second relegation with the club, and Birmingham have spent much of the last decade embroiled in financial crises and staving off the threat of the drop to League One.

Because clearly one disastrous fall from grace just wasn’t enough for Newcastle, they outdid themselves with another, even more humiliation relegation in 2016.

First, some context. Under Chris Hughton, Newcastle return to the top-flight at the first attempt in 2010. Hughton is sacked soon into their first season back and replaced by Alan Pardew, widely disliked by Newcastle fans but who finishes fifth in 2011-12 and is rewarded with a mammoth eight-year contract.

Despite a stunning run of form at the end of 2014, which sees Newcastle win five successive league games and rise from 18th to fifth, Pardew ups sticks for Crystal Palace. Nobody replaces him, so John Carver takes caretaker charge.

Cue the madness. Despite professing himself as the best coach in the Premier League, Carver was responsible for an abysmal run of three wins from the last 19 games of the season, as Newcastle slid back down the table and only secured survival on the final day. He departed after the conclusion of the campaign.

In his place came Steve McClaren, who had just overseen a startling drop from first to eighth in the Championship at Derby County but who Mike Ashley was willing to put his hand in his pocket for. And indeed he did, spending a total £80 million on signings including Georginio Wijnaldum, Aleksandar Mitrovic and Florian Thauvin in the summer, and later Jonjo Shelvey and Andros Townsend in January.

But from the moment Thauvin and fellow summer recruit Chancel Mbemba irked fans by arriving at matches in tuxedos, Newcastle slipped from one nadir to the next. McClaren proved out of his depth, and was put of his misery in March 2016 after a 3-1 home defeat to Bournemouth left them 19th.

A surprise appointment in Rafa Benitez followed, but the Champions League winner was simply given too much to do. A late-season rally gave them hope, but a failure to beat hapless Aston Villa, the second-worst team in Premier League history, in their penultimate game did for Newcastle. They were relegated later that week after Sunderland, of all teams, beat Everton to clinch survival.