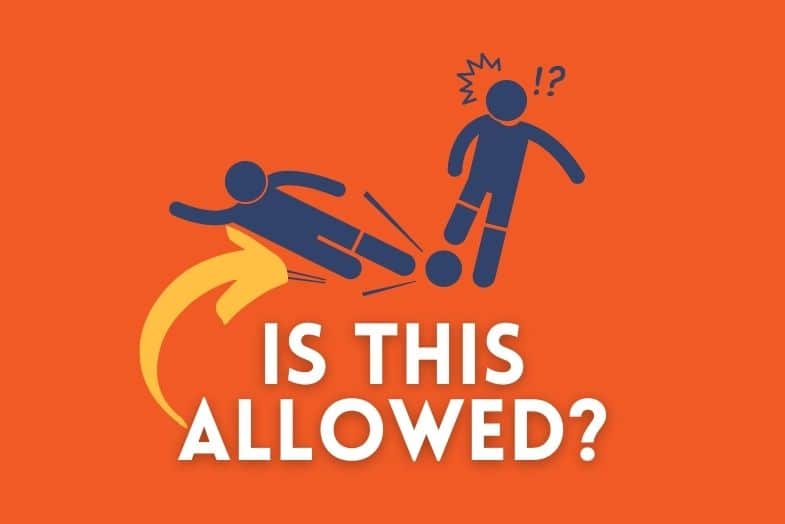 Tackling is one of the most debated topics within football as players, coaches, pundits, and supporters all have different views on whether a specific challenge is a tackle or a foul.

Although there are a set list of rules regarding legal tackles, made by the football governing bodies, it can still remain unclear what type of tackle is deemed a yellow or red card offence.

So what is a legal tackle in football? And when should a foul be worthy of a red or yellow card?

Definition of a Tackle in Football

What is a Legal Tackle in Football?

For a tackle to be legal in football, the challenge from the defending player must be directed against the ball rather than the player in possession. This is achieved by using either leg to steal the ball from the opponent, or by sliding in on the grass to knock the ball away with their leg.

As some contact between players is allowed in football, a defender is permitted to use their body to obstruct the motion of a player with the ball, and this may be part of a successful tackle.

Pulling a player to the ground in the style of a rugby or American football tackle is completely absent from the game and would be considered to be serious foul play – an offence that could result in a red card and therefore dismissal from the game.

The rules of modern-day football significantly limit the physicality of tackles, explicitly forbidding contacts which are stated by the Football Association as “careless, reckless or [use] excessive force”.

Are Slide Tackles Allowed in Football?

Considered to be the most spectacular form of tackle, a legal slide tackle is when a tackler slides, leg extended, along the ground, aiming to hit the ball away without connecting with the attacking player first.

When is a Tackle a Foul in Football?

As listed by the Football Association, a tackle or challenge that endangers the safety of an opponent or uses excessive force or brutality must be sanctioned as serious foul play and therefore a foul. Almost all tackles where the tackler’s legs make contact with the opponent before the ball are considered illegal.

An illegal tackle which is also a professional foul is considered misconduct whereas
heavy contact after initially touching the ball may also be penalised.

As fouls are common in a match, with dozens of occurrences in a typical match, standard fouls are usually not considered misconducts. However, yellow cards may be delivered for more serious fouls that the referee deems as unsporting behaviour.

When is a Tackle a Yellow Card?

A yellow card is shown when a tackle is aggressive, prevents a build-up of play, or is repeated by the same player. If it is not committed with any danger or violent conduct, a standard foul such as connecting with the player before taking the ball can be deemed as a yellow card if the referee believes a caution is needed for the offending player.

If a player miss-times a slide tackle, connecting with the player and not the ball, it is usually given as a yellow due to a lack of control from the offending player, however, this is consequently the referee’s decision.

A yellow card can be given for a tackle that prevents the build-up of play for the attacking team, this can be purposely fouling a player to stop an attack or doing so by simply missing the ball in an attempt to play the ball.

Although these can often be deemed as professional fouls and can result in further punishment such as a red card, it is ultimately the match official’s decision whether it is serious enough to change from a yellow card challenge to a red card offence.

When is a Tackle a Red Card?

If a foul or challenge endangers the attacking player’s safety, it is likely to be considered violent conduct by the referee and punished with a red card. If the offending player lunges at their opponent with both legs, studs raised high, or commits a dangerously high tackle not aimed at the ball, it is worthy of a red card.

Violent conduct is when a player uses excessive force or brutality against an opponent when not challenging for the ball, or against a team-mate, team official, match official, spectator, or any other person, regardless of whether contact is made.

A ‘studs up’ tackle is considered to be violent conduct and made when a player lunges into a tackle with a leg or both legs outstretched exposing the soles of their boots, referees are encouraged to brand players who commit such challenges with a red card.

Regardless of whether the ball is won, a two-legged tackle or ‘scissor’ challenge is generally considered to constitute serious foul play and hence result in a sending-off.

In addition, a player who deliberately strikes an opponent on the head or face with the hand or arm is guilty of violent conduct unless the force used was negligible, resulting in a red card.