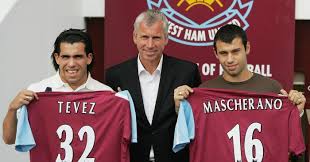 With such unprecedented levels of money in the Premier League, it is little wonder that a fair amount of it has gone to waste on some dodgy deals.

Here are the ten most head-scratching transfers involving top-flight clubs in England since the inception of the Premier League in 1992:

After a decent first season at Goodison Park, Ronald Koeman was clearly intent on preparing Everton for a serious assault on the top four.

Though some of Everton’s 11 incomings that season proved catastrophic, not least Klaassen, most seemed, at least on paper, relatively shrewd deals at the time. Cuco Martina, not so much.

Aside from a wonder strike against Arsenal, Martina had done precious little in his two years at Southampton to suggest he could challenge Seamus Coleman at right-back. Having also been brought to the Saints by Koeman, it bore all the hallmarks of a manager signing his mate.

Martina could rarely be faulted for effort, but in his 28 Everton appearances in 2017-18, many of which he played out of position at left-back, he rarely impressed, to the surprise of few.

Having spent this season on loan at Stoke City and Feyenoord, there is no future at Everton for Martina, who was told to stay away from first team training in July by new boss Marco Silva.

Arsenal were right in the thick of the title race, one point off leaders Manchester City. They just needed some extra reinforcements, ideally a striker, to cement their credentials as potential champions.

What they didn’t need was an injured 31-year-old midfielder in Kim Källström.

Just two days after the deal to bring Källström in on loan from Spartak Moscow was completed, manager Arsene Wenger admitted he did not know the veteran had a damaged back which would sideline him for six weeks, and would not have sanctioned the transfer had he been aware of it.

Källström, who argued on Swedish radio two years later that Wenger did know of his injury when he signed, did not receive his Arsenal debut until the end of March, in one of only four appearances he would make for the club.

On the deadline day of the previous transfer window, Manchester United signed Daley Blind and Radamel Falcao. This time around, they loaned a player on who had spent part of the season on loan at League Two Plymouth Argyle.

Bolton youngster Andy Kellett said he thought manager Neil Lennon was ‘winding him up’ when he told him of United’s interest, but he spent the rest of 2014-15 on loan at Old Trafford, making no first team appearances but ten showings for the under-21s.

After spells at Wigan Athletic and Chesterfield, Kellett is now with Notts County who, following their relegation from League Two, will be a non-league club next season.

Liverpool have just won their sixth Champions League, and finished second in the Premier League with 97 points, thanks largely to Jurgen Klopp and his excellent signings.

But it’s fair to say one of his first as Reds boss, Steven Caulker, wasn’t the most successful of the lot.

A central defender at Championship side QPR, Caulker moved to Anfield on loan for the rest of 2015-16 after his loan at Southampton was cancelled.

But he made just three league appearances for the Reds, used more as a target man up than in his natural home at the heart of defence.

The 27-year-old is now with Turkish club Alanyaspor following a spell in Scotland with Dundee.

Wright’s first team football opportunities had been few and far between already; he had made just 15 Championship appearances in the previous three years with Sheffield United and Ipswich Town.

But he joined City in August 2012, before signing one-year extensions in each of the next three years. When he retired in May 2016, Wright had still not made his debut for the club.

It is estimated that Wright made about £1.4 million in wages while on City’s books. He remains at the club today, as a member of Pep Guardiola’s coaching staff.

Another baffling deadline day deal. Papy Djilibodji had reportedly attracted the interest of Premier League clubs Sunderland and Aston Villa in the summer transfer window of 2015, but then-champions Chelsea seemed nothing more than a pipe dream.

Yet he moved to Stamford Bridge from Nantes at the eleventh hour, only to be omitted from their 25-man Champions League squad the next day. Even in a miserable season for the Blues, in which they finished tenth, he managed just one first team appearance; a League Cup third round tie at Walsall.

He was sold to Sunderland for an eye-watering £8 million the following summer, but was sacked by the club in September 2018, by then in League One, for gross misconduct.

He is now back in France with Guingamp, during which time he was given a six-match ban for breaking an opponent’s nose with a kick in the face.

Sir Alex Ferguson had never seen him play, but that seemed to matter little in Manchester United’s decision to bring 20-year-old Bebé to Old Trafford in the summer of 2010, just five weeks after he signed for Portuguese club Vitória de Guimarães.

Bebé’s four years in England involved three loan spells, seven United appearances and two goals, before he was put out of his misery and returned to Portugal with Benfica in July 2014. Not exactly Sir Alex’s finest stroke of brilliance, then.

It seemed scarcely believable when, on deadline day in August 2006, West Ham signed Argentinian duo Carlos Tevez and Javier Mascherano, who had both represented their country at the World Cup that summer and were said to have attracted interest from Manchester United, Arsenal and Chelsea.

It later transpired that the Hammers had signed the pair from third-party owners; the rights to both players were owned by Media Sports Investments, headed by Kia Joorabchian.

They were fined £5.5 million that same season, and while Mascherano was moved on in January 2007 to Liverpool, Tevez scored the goals which retained West Ham’s Premier League status, at the expense of Sheffield United and a seething Warnock.

After making just 32 West Ham appearances in his first season-and-a-half with the club, the entire football world was stunned when Real Madrid loaned right midfielder Julien Faubert from the Hammers. Even Paul Merson said his agent deserved a knighthood.

Less surprising was that Faubert made just two appearances for the Galacticos, and his ill-fated spell with the club will forever be remembered for falling asleep on the substitutes’ bench and missing training for wrongly thinking he had the day off.

Then-manager Juande Ramos defended Faubert by saying ‘he got confused’. Probably not as confused as the rest of us at the sight of him at the Bernabeu, though.

The archetypal transfer flop, Ali Dia tops the list as the Premier League footballer that never was.

He had played lower-league football in France and Germany. He had failed in trials at Gillingham and Bournemouth. He did not, it is fair to say, seem destined for the top-flight.

But after just one substitute appearance for non-league Blyth Spartans, Dia joined Saints after manager Graeme Souness received a phone call supposedly from former FIFA World Player of the Year, George Weah, urging him to sign Dia, his cousin.

Of course, it was all a hoax; the call had come from a fellow university student of Dia’s, but he still moved to St Mary’s on a one-month contract, and proved horribly out of his depth.

In his only game for Saints, a 2-0 defeat to Leeds United, Dia came on as a first-half substitute, only to be taken off himself 53 minutes later. Clearly out of his depth, Southampton legend Matt Le Tissier said afterwards:  “He ran around the pitch like Bambi on ice; it was very embarrassing to watch.”

Dia was unsurprisingly released two weeks into his deal, before returning to non-league with Gateshead and Spennymoor United, where he finished his career.

But his name lives on in newspapers, magazines and websites’ ‘worst footballer of all time’ lists, which he frequently finds himself at the top of.