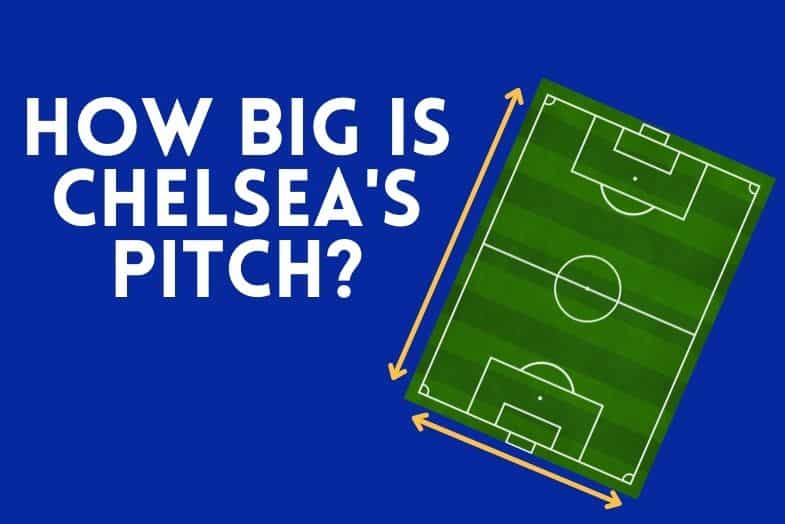 Chelsea have been one of England’s most successful clubs both at home and abroad over the past 20 years, and its famous old ground Stamford Bridge has been a fortress at times over the past two decades.

With a capacity of 40,341, Stamford Bridge is only the ninth-biggest stadium in the English Premier League, and this is also reflected in the size of the pitch on which Chelsea play their home games.

The size of the pitches used by Premier League clubs varies to an extent as the rules allow for pitches to be of different dimensions, as long as they fall within the recommended guidelines.

So what are these guidelines, and how big is the Stamford Bridge pitch?

Let’s have a closer look.

Chelsea’s Stamford Bridge pitch is 103 metres long and 67 metres wide, making a total playing area of 6,990 square metres. This makes it the fifth-smallest pitch in the Premier League.

The Football Association’s rules state that pitches must be between 90 metres and 120 metres long, and between 45 metres and 90 metres wide.

The Premier League recommends that pitches should be 105×68 metres, but there is some wiggle room, and all clubs largely adhere to this recommendation, give or take a metre or two.

Is Stamford Bridge a Small Pitch?

Relatively speaking, Stamford Bridge does have a small pitch, as it is the fifth smallest out of all 20 pitches in the Premier League.

Only Crystal Palace, Fulham, Liverpool and Everton play on smaller pitches at home. The Stamford Bridge pitch has a playing area of 6,990 square metres, which in relative terms is dwarfed by the pitches at the likes of Manchester City’s Etihad Stadium or Manchester United’s Old Trafford.

What is Stamford Bridge Pitch Made Out Of?

Like virtually all top-level football clubs now, at Stamford Bridge Chelsea have a hybrid pitch made up of around 95% real grass and 5% synthetic fibres.

These pitches are effective because they can endure more playing hours while also recovering faster than 100% natural grass pitches.

Chelsea, along with the likes of Manchester United, Everton and Newcastle, use Desso Grassmaster, arguably the most popular and common hybrid system available in the game today.

The fibres are injected into the turf twenty centimetres deep and as the grass grows its roots intertwine with the artificial fibres. The makers claim that this allows for a solid, even structure of turf with better drainage than natural grass on its own and improved ‘playing comfort’.

Why Do Chelsea Fans Own the Pitch?

Following financial problems throughout the 1980s, Chelsea only regained control of Stamford Bridge from bankers in 1992; the non-profit fan organisation Chelsea Pitch Owners was created, and in 1997 it purchased the Stamford Bridge freehold, including the pitch itself.

The CPO also owns the Chelsea FC name, and has granted the club a 199-year lease on Stamford Bridge at a peppercorn rent.

So the Stamford Bridge pitch is the only one in English football to be fan-owned, with the CPO’s 13,000 members being the legal guardians of the turf.