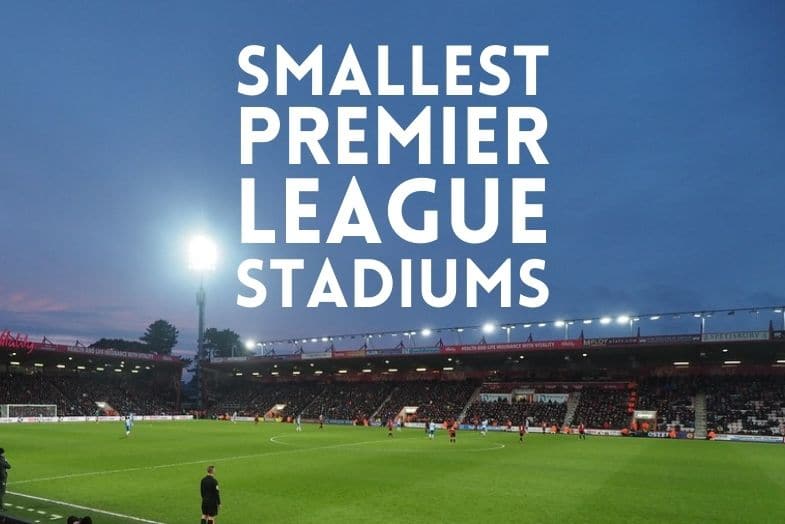 The Premier League is viewed as the most entertaining domestic football league in the world, so good luck to anyone trying to get their hands on a ticket! Teams like Liverpool, Manchester United and Chelsea have fans on waiting lists for years to have the opportunity to buy a season ticket. For instance, an estimated 25,000 people are on the waiting list for an Anfield season ticket; a little under half of the maximum capacity.

If you thought it was difficult getting tickets at the biggest teams in England, spare a thought for fans of Premier League teams with tiny stadiums. Whether clubs own their own stadium or not, those with fewer seats face disappointing fans who can’t get a ticket.

But for those who do, the opportunity to see the greats of the Premier League is an event they can hold dear, even if their club doesn’t stay in the ‘big league’ for long. Let’s look at which Premier League teams throughout the years had the smallest stadiums.

What’s the Smallest Stadium in the Premier League Currently?

Following their promotion from the Championship in 2022, Bournemouth are the proud owners of the smallest current Premier League stadium. With a capacity of just 11,364, those looking to get in on the Cherries’ Premier League action will have to be quick to get a ticket at Dean Court.

Although a small stadium, Bournemouth proved during its first stint in the Premier League that it can be a difficult place to visit. Bournemouth owns home Premier League victories over the likes of Manchester United, Leicester, Liverpool and Arsenal at Dean Court.

Besides Bournemouth, other current Premier League teams with small stadiums include Brentford (17,250) and Crystal Palace (25,486). If Luton Town manage to get promoted before their new stadium is built, Kenilworth Road’s 10,356 capacity would become the new lowest.

Blackpool played the role of Premier League plucky underdogs led by Ian Holloway when they were promoted in 2010. Bloomfield Road’s 16,220 capacity stadium would host just one Premier League season but it was an enjoyable ride for all concerned.

The stadium has been Blackpool’s home since 1901 with the likes of Stanley Matthews and Jimmy Armfield gracing the pitch.

Before switching to St. Mary’s, Southampton played at The Dell which remains one of the Premier League’s smallest ever grounds. Opened in 1989, Southampton called the 15,200-seat stadium home until 2001, allowing the Saints to get some Premier League seasons under their belt at the famous ground.

Unless you’ve watched the Premier League since it began in 1992, there’s a good chance Swindon Town hasn’t featured on your radar. Playing at County Ground, Swindon enjoyed just one season in the reimagined top flight league from 1993-94.

County Ground has been home to Swindon Town since 1895, making it one of the oldest football stadiums in England.

Oldham Athletic was part of history when it joined the Premier League for its inaugural season in 1992. Boundary Park is where the Latics played their games until Oldham was relegated in 1994.

With a capacity of just 13,559, it’s hard to imagine the queues for tickets when teams like Liverpool and Manchester United rolled into town.

Bournemouth has the honour of being the team with the smallest ever stadium in the Premier League. With a capacity of just 11,364, Cherries supporters had to learn to find their voices to inspire their team to stick around in the top flight for over five years.

For football fans looking to tick off stadiums they have visited, getting a ticket at Bournemouth when they are in the Premier League is easier said than done.