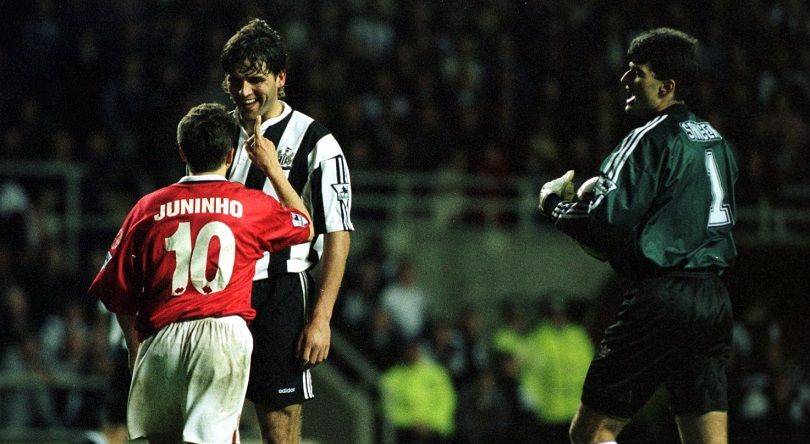 Being small and diminutive can at times be a disadvantage when playing in an overly rough, physical league, but it doesn’t make you a bad footballer. Just ask 5ft 7in Lionel Messi, for instance.

Probably the most little-known little player on the list, striker Ducros is tied for the shortest ever footballer to grace England’s top tier.

A youth team player at Coventry City, Ducros made eight Premier League appearances for the Sky Blues without scoring a goal between 1996 and 1997. He later went on to represent Nuneaton, Kidderminster and Burton in English football’s lower echelons.

Another joint-shortest ever Premier League player, former Blackburn and Aston Villa left-back Alan Wright also measured up at 5ft 4in.

Having been a Rovers regular for the first two Premier League seasons, he left Ewood Park just before they became champions in 1994-95, moving to Villa, who he would represent more than 300 times over an eight-year period.

Scotsman Fraser was part of Eddie Howe’s promotion-winning side and established himself as one of the most prolific wide men in the league, before he left Dean Court in June 2020 having refused a contract extension to the end of the season following the coronavirus pandemic. Fraser is a free agent at time of writing, and Bournemouth could not beat the drop without him.

Another tiny wide player, Wigan’s Albert Crusat is the joint-second shortest ever professional footballer in England’s top-flight. He certainly made less of an impact on the Premier League than Fraser has managed so far, though.

Crusat moved to the DW Stadium from Almeria in the summer of 2011 but made just 17 career outings for the Latics, scoring once. Unsurprisingly, of the Wigan players Roberto Martinez pinched following his departure for Everton in 2013, Crusat was not one of them.

What this Brazilian lacked in stature, he more than made up for in skill during his time at Middlesborough. Indeed, many consider Juninho among Boro’s greatest players; at least during the Premier League era.

Representing Middlesbrough across three spells from 1995 to 2004, Juninho always came armed with a box of tricks and a keen eye for goal, and the midfielder will also be remembered as part of Boro’s League Cup-winning side in 2004, still their most recent major piece of silverware to this day.

A Swansea mainstay for much of the last decade, winger Dyer will go down in club folklore as the man who netted a brace on one of their greatest days, the 5-0 League Cup final win over Bradford City in February 2013.

Dyer was an integral part of Brendan Rodgers’ promotion winners in 2010-11 and of the Swansea side that strutted their stuff in the top-flight for many years. A timely loan to Leicester City also saw him become a Premier League champion in 2016, and he is still at the Liberty Stadium today, trying to restore the Swans to the top-flight.

Another nifty winger on the list, the electrifying Lennon proved a nightmare for many a full-back during his 365 Tottenham appearances from 2005 to 2015.

A League Cup winner with Spurs in 2008, Lennon later moved on to Everton (initially on loan) and Burnley, who released him in the summer of 2020 and two-and-a-half years of service.

There are two current top-flight players tied for the honour of being the shortest; Everton’s winger Bernard is the first of them.

Measuring up at just 5ft 4in, the lightning-fast Brazilian has struggled to find consistency in his end product in his two years at Goodison Park with just five goals. But when he has excelled, he has shown how technical brilliance can override a lack of height, not least with this wonderful solo effort against West Ham last season:

Equalling Bernard’s record is Brighton full-back Lamptey, a 19-year-old who joined the Seagulls from Chelsea in January 2020.

Lamptey was given a baptism of fire by Frank Lampard as a second-half substitute at Arsenal in December 2019, and two more FA Cup appearances followed the next month before swapping Stamford Bridge for Sussex. Since the Premier League restarted post-lockdown, Lamptey featured in all of Brighton’s final eight 2019-20 games.

A new addition following Leeds’ romp to promotion last term, 5ft 5in winger Poveda will be looking to force his way further into Marcelo Bielsa’s plans in their first Premier League campaign since 2003-04.

Poveda, 20, left Manchester City for Elland Road in January 2020 but has so far made only four Leeds appearances, three of which came from the bench.

Another January signing, Portuguese winger Podence also stands at 5ft 5in tall, and Wolves fans will be hoping to see him continue his late-season surge into 2020-21.

Podence, a £17 million signing from Olympiakos, did not start a Premier League game for Wolves until July, but really came into his own then, particularly with a man-of-the-match performance in a 3-0 win over Everton and his first goal in gold a week later in a 2-0 victory against Crystal Palace.