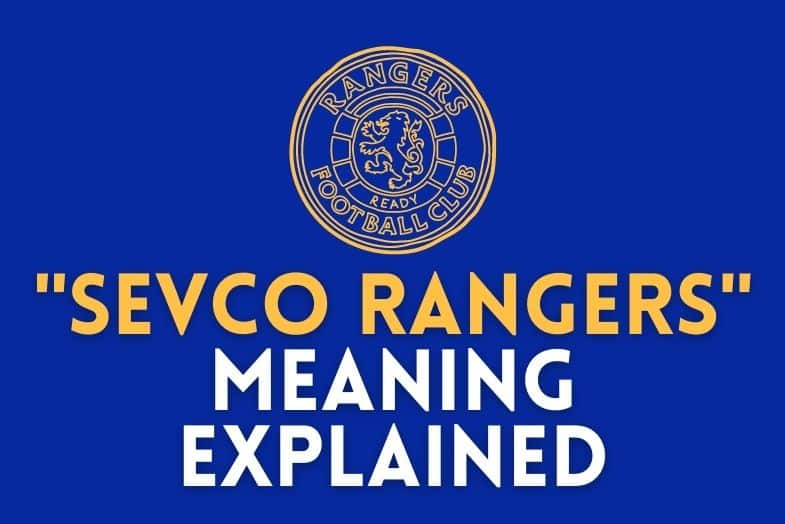 Celtic and Rangers have a long history as rivals, and that commonly means one side trying to get the upper hand on the other. From looking back at league titles won and lost to European glory, or a lack of it, Glasgow’s two biggest clubs have plenty of ammunition to use against the other.

But since Rangers went into liquidation in 2012, Celtic fans have found a new way to banter their rivals. Depending on which side of the Glasgow city rivalry you lie, the term ‘Sevco’ may be a sore subject or it could be the fuel you use to goad your opposite fanbase. So what is the meaning behind ‘Sevco Rangers’ and why have Celtic fans given their bitter rivals a new nickname?

Sevco Rangers relates to the purchase of Rangers when the club was liquidated in 2012. Sevco Scotland Ltd stepped in to buy the club and its assets, ensuring that Rangers fans still had a club to support. However, whether those fans support the same club that existed before 2012 is up for debate.

Why Are Rangers Referred to as Sevco?

Rangers are referred to as Sevco as this is the company that acquired it when it was liquidated in 2012. That company was called Sevco Scotland Ltd. but later changed its name to The Rangers Football Club Ltd.

With this name change, Celtic fans felt as though they had all the reason they needed to claim that Rangers as we once knew it no longer exists. Instead, Sevco is the new club which just so happened to change its name to Rangers.

The Celtic and Rangers rivalry is one of the fiercest in all of football. Not only is their proximity to one another a constant reminder to fans of either club that their rivals exist, but there are social and cultural differences too.

Celtic is a club with a deep-rooted connection to Ireland while Rangers is arguably the antithesis of this and exists as a club for native Scots. During Celtic’s early years there were many tensions between the Irish community in Glasgow and the locals. This is also connected to the Troubles in Northern Ireland and is reflected in much of each club’s iconography.

Not only are there plenty of social, political and religious reasons for the rivalry; both clubs are also hugely successful in their own rights. With each success most often coming at the direct failure of their rival, Scotland’s two largest clubs have been fighting tooth and nail for decades. Some believe they have even outgrown the Scottish league and should play in the Premier League.

Some Celtic fans choose to refer to Rangers as ‘Sevco’ to denounce their legitimacy as a club. The Hoops fans see Rangers as a club that no longer exists following its liquidation, and they don’t want people to forget it.

Arguments about the legitimacy of Rangers’ existence arose due to a perceived bending of the rules by the SFA to accommodate a football league with Celtic’s rivals still in it. Many feel the original Rangers no longer exists as it was liquidated in 2012 and replaced by ‘Sevco’ Rangers, a company that bought the rights to the original club’s titles and likeness. Sevco is another way for Celtic fans to rile up their rivals while also ensuring the history of Rangers’ takeover and supposed rebirth is never forgotten.