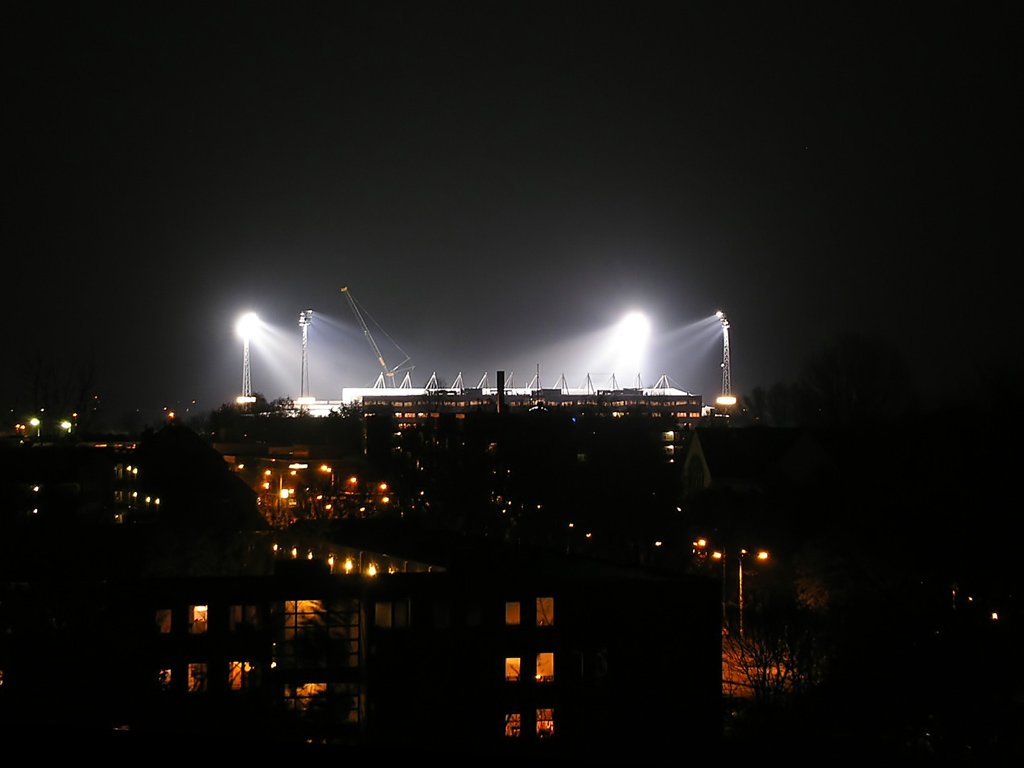 Away from the soulless, drab corporate bowls housing many of football’s biggest and best nowadays, a growing number of clubs embracing one of the game’s newest creations to recreate the atmospheres of old.

Safe standing is the latest step in reviving football’s volume levels, and it could soon be coming to a ground near you:

What is Safe Standing?

Safe standing allows football fans to stand up during matches without putting themselves or those near them in any danger.

Its most common form is ‘rail seating’, where a metal frame is added to a metal seat to make a waist-high rail which fans lean against. They can be locked together, or unlocked to make the ground all-seater again.

A single rail seat is the equivalent of a single ‘normal’ seat, so overcrowding is not a risk with this type of safe standing.

Other variations include the ‘clip on seats’, which include safety barriers for each few rows which can easily be removed to convert back to all-seater, allowing seats to be attached and removed as and when, and ‘foldaway seats’, where the seats ‘fold away’ when in standing mode but, again, contains easily-removable barriers for all-seater games.

Where is Safe Standing Popular?

Most commonly in Germany, where it has proved a real hit in recent years. Borussia Dortmund, for instance, have gained a reputation for their enormous, raucous ‘Yellow Wall’, while Schalke 04’s Nordkurve stand sees more than 16,000 kept on their feet.

It’s not just the big hitters in the Bundesliga adopting it, either. Union Berlin, who were promoted to the German top tier this season, has a stadium which sees three of its four stands made up of standing terraces. When it expands in 2020, in excess of 25,000 supporters will be able to stand at their matches.

Elsewhere, in Holland, PSV’s rail seats have thrived since they were built three years ago, while Celtic can house almost 3,000 supporters in their safe standing area at Celtic Park.

Currently, the only club in England to have installed it is Shrewsbury Town, whose rail seating area of their ground, Montgomery Waters Meadow, opened in August 2018.

But, as it becomes an increasingly common talking point in the football world, many are beginning to follow their lead, including Wolverhampton Wanderers, who announced in May their plans to install safe rail seats over the summer.

How is Safe Standing Improving Football?

Simple, really – it’s helping bringing atmosphere back to the game.

For many fans who grew up singing their songs and drinking their beers on the terraces, safe standing provides a welcome, if obviously safer, hark back to the past.

Safe standing won’t be for everyone – that’s not the point – but at least it gives people an option of how they want to watch the match in front of them.

And, as the name suggests, it’s definitely ‘safe’, with risks of injury of overcrowding minimised in most cases.

For instance, speaking about his own club’s model, a Schalke official told DW.com: “Standing is absolutely safe. The number of stewards on the terrace is higher than in other areas of the stadium. This guarantees that stairways and exit routes are kept free.”

Any Dangers in Safe Standing at Football?

Understandably, some who are still shaken by the atrocities of Hillsborough and similar tragedies still have reservations.

While a number of families of those who suffered at Hillsborough have come out in support of the idea, Margaret Aspinall, the chair of the Hillsborough Family Support Group, has previously said she believes there is ‘no such thing’ as safe-standing in football.

And while safe standing can create a more feral atmosphere, this will often have the potential to transform into more violent, hostile and frankly undesirable scenes. As Dion Dublin said on Football Focus five years ago, ‘It’s all-seater at the moment and everything’s going OK. Why go back to something that might not work?’

Is it Viable For English Football?

Hopefully, it will be, but it will be slow, gradual progress rather than a quick fix.

Shrewsbury have been England’s pioneers, and their safe standing area, which can accommodate up to 555 fans, has been a great success in its first season, running at about 75 per cent occupancy on average.

Others are trying; Northampton Town have been preparing for safe standing since initially announcing their plans in June 2017, while West Bromwich Albion wanted their stadium, The Hawthorns, to be used as a pilot scheme, but their proposals were rejected by the government in April 2018.

As mentioned earlier, though, Wolves’ plans to install rail seats will bring great encouragement that it is feasible in the upper echelons of the game. Tottenham’s new ground, meanwhile, has the potential to convert part of it into a safe standing area, as should Everton’s proposed new stadium.

For now, though, it remains illegal for football grounds in the Premier League and Championship to not be all-seater, ever since these recommendations were made in the Taylor Report after Hillsborough.

But, given time and due diligence, it may not be long these regulations are relaxed, and safe standing can thrive in England as it has done across the continent already.