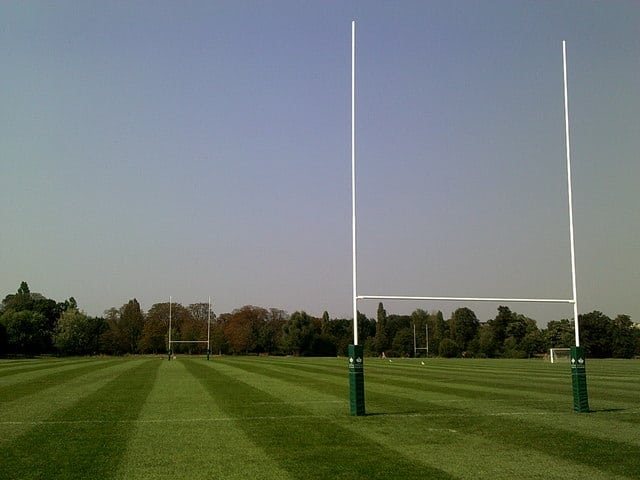 We’ve looked previously at how, in football, Premier League pitches vary in size, but what about in rugby?

What is the length of a rugby pitch, and do they also differ like they do in football? What size is a rugby union pitch compared to rugby league? We’ll take a look at all of this and more below:

What Size is a Rugby Pitch?

How Long is a Rugby Pitch in Metres?

Usually, the dimensions of a rugby pitch are 100m from try line to try line. The is the maximum length it can be; the minimum is 94m (106-144m including the ‘in-goal areas’, both of which can measure between 6-22m).

How Wide is a Rugby Pitch In Metres?

Again, this can vary but as a general rule, most rugby pitches are 70m wide. This is the widest they can be; the smallest width a rugby pitch can measure from touchline to touchline is 68m.

Are All Rugby Pitches the Same Size?

No, because of the leeway in permissible sizes as mentioned above. As a result, rugby pitches’ playing area can be as small as 7,208 sq m or as large as 10,080 sq m.

How Big is a Rugby Pitch Compared to a Football Pitch?

What is the size of a rugby pitch compared to a football pitch, you ask? Well, for this investigation, we’ll use Premier League pitches as our basis:

Which is Bigger: Football or Rugby Pitch?

The smallest Premier League pitch in 2020-21 is Fulham’s Craven Cottage, measuring 109 x 71 yards (to the nearest whole number), while the largest is the Etihad Stadium of Manchester City at 116 x 77 yards.

That equates to 6,500 sq m at Fulham and 7,420 sq m at City – meaning there is a little bit of overlap between rugby and football pitch sizes, given the smallest rugby pitch possible is 7,208 sq m.

Given that’s two extremes, though, you’ll be hard-pressed to find many football pitches bigger than rugby pitches.

How Big is Twickenham Rugby Pitch?

With a capacity (for rugby games at least, if not American football) of 82,000 and the home of the England national rugby union team, Twickenham is one of the biggest and best homes to the game in the UK.

Its field size measures up at 125m x 70m (8,750 sq m) – which makes it comfortably larger than Wembley, the English national football stadium.

Are Rugby League and Union Pitches the Same Size?

No, though one is not always bigger than the other. Some rugby league pitches may outdo some rugby union pitches in terms of size, and vice versa. Let’s look at how they differ: