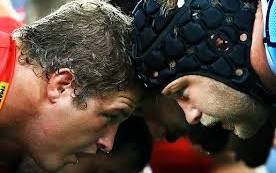 Ever wondered quite how different between two ostensibly similar sports? What separates rugby union and rugby league and makes them both unique?

Quite a lot, in fact, not least in terms of rules, tactics, playing styles, and popularity. Let’s get into the rugby union vs rugby league debate, look at exactly what the differences are between the two, and discuss whether one can be considered ‘better’ than the other:

What is the Difference Between Rugby League and Rugby Union?

Rugby union came first, initially known as ‘rugby football’. The Rugby Football Union (RFU) was formed in 1871 by English clubs, before the game spread further to Australia and New Zealand during the 19th century.

In 1892, a proposal to pay players up to six shillings when they missed work for a rugby union match was voted down. As a result, in 1895, Lancashire’s leading clubs offered their support for the Yorkshire sides leading the formation of a professional organisation – the Northern Rugby Football Union, or Northern Union (NU) for short.

The authorities issued sanctions against clubs, players and officials in the offshoot group, which led to separate codes being formed – ‘rugby union’ for the RFU code, and ‘rugby league’ for the NU code. Essentially, then, that’s how the difference in laws between the two sports started – by being written into their own codes.

In terms of differences today, there is a slight disparity between the two balls used, for instance. They are of similar size to one another, but rugby league balls have more pointed edges than that of rugby union.

The most noticeable difference between the two is that a game of rugby league is contested by two sides of 13 players each, whereas in rugby union, this is increased to 15 players on both teams. You are also allowed ten substitutions in rugby league, as opposed to just eight in rugby union. That rugby league has fewer players on the pitch also explains why their pitches are smaller.

The awarding of points also differs between the two sports, as you’ll see in the table below:

The two sports also vary in regards to rules over tackling. In rugby union, when a player is tackled, a ruck forms when a player from each team joins in to challenge for the ball. This does not happen at all in rugby league, though.

Instead, in rugby league, a tackled player has to roll the ball back with his feet and a ‘chicken scratch’ takes place, whereby a player from each side then competes for this rolling ball.

Also, when a ball is kicked off the pitch in rugby league, a scrum occurs involving eight players, whereas if this happens in rugby union, a lineout takes place from where the ball crossed the touchline.

A team can only be tackled a maximum of six times in rugby league before that team must give ball possession to the opponent, often by kicking it to them. This is limitless in rugby union, by contrast.

As we discussed in a previous post here, rugby league appears to be lagging behind its closest counterpart in the popularity stakes, at least.

Perhaps this is because, in truth, it is only really a major sport in England, New Zealand and in particular Australia, where the ‘working class’ roots of the game seem to especially resonate.

Rugby union, however, has garnered a far more global appeal, partly because of its reach across commonwealth countries, aided by the British armed forces’ decision to ban rugby league in the early 20th century.

Rugby League vs Rugby Union: Which is Better?

Without wanting to offer the most bland, on-the-fence answer as possible, that really depends on personal preference.

If you want a more all-action, end-to-end spectacle, rugby union is probably your ‘rugby of choice’, with more exciting runs and passes and varied, hectic kicking plays. But if you prefer something more old-school, where tackling, kicking and sheer force of will is the cornerstone, you’re likely to be more of a rugby league man.

One thought on “Rugby League vs Union: What’s the Difference?”