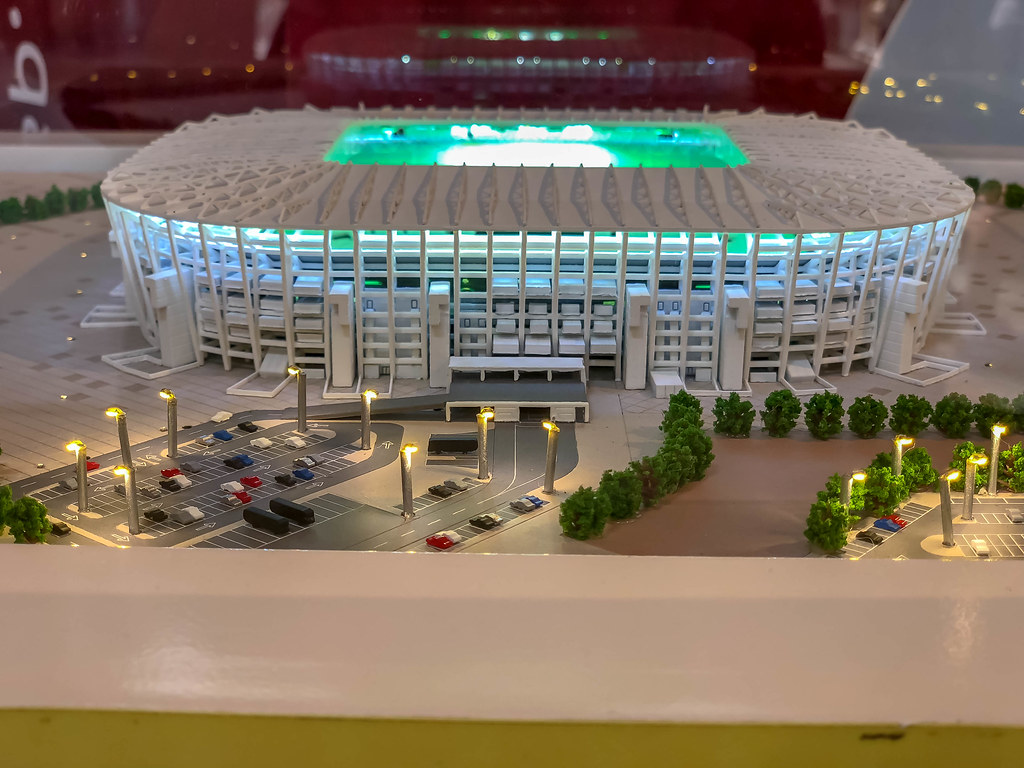 They say the biggest sporting events can cause a great legacy for the host nation. Just look at how some of the venues from London’s 2012 Olympic Games have been put to good use, for example.

But for Qatar, hosting the 2022 FIFA World Cup, it seems, won’t carry such longevity. For one thing, one of the grounds being used, the Ras Abu Aboud Stadium, is being built solely for the competition, and then will be dismantled after its conclusion.

So, what exactly is the reasoning behind it, and should it even happen at all?

The Ras Abu Aboud Stadium will be a 40,000-seater ground built in Doha, Qatar for use at the 2022 World Cup, up to the quarter-final stage.

Qatar’s Supreme Committee for Delivery & Legacy labels it a ‘pioneer in stadium development and mega-events’, which is probably fair given no World Cup stadium has been immediately knocked down after fulfilling its original purpose.

It will be built on an artificial headland, and will have a modular design, constructed using recycled shipping containers, removable seats, and more, to create a vivid, colourful and unique arena that is supposed to look as if it were actually made from individual building blocks.

It will then be ‘repurposed’ after the World Cup following its demolition, so that the materials used to create it can be put to good use elsewhere.

What Advantages Will It Bring?

Of course, some will consider it a shame that it will only be around to host football matches for an extremely short time, but there’s no doubt that the World Cup isn’t the end of the story for the stadium, despite it being the one and only competition it will host matches at.

Those living near the stadium site will enjoy a verdant waterfront development that will occupy the site once the stadium has gone, for instance. Meanwhile, one of its aims is for it to inspire a new wave of football fans having seen the world’s best play there at the World Cup.

It is also seen as a cost-effective solution, given it will be aesthetically pleasing and easy to dismantle, with its constituent parts coming in handy thereafter, while the financial impact will be lowered through using fewer materials.

All 40,000 seats, the containers and even the roof will be re-used for another project, so hardly anything will go to waste even after the World Cup. Hopefully, its creators say, this will spearhead a move towards more sustainable projects like this, creating more potential hosting opportunities for countries across the globe.

What’s more, that it will be situated by the shores of the Gulf will lend itself to a natural cool breeze, thus minimising the reliance on the stadium’s cooling systems in what will likely still be sweltering conditions, even though the World Cup will take place in November and December.

Certainly, the idea of building stands ‘for the time being’ while clubs await the completion of a larger project is a growing trend in the game, not least in England.

For example, Bournemouth first introduced a temporary stand named after club legend Ted MacDougall in 2013, while the lower tier in the North Stand at Huddersfield’s John Smith’s Stadium remains a short-term fix to facilitate any concerts that take place at the ground during the summer.

Temporary stands have also been found in the last decade at Blackpool’s Bloomfield Road and Bristol Rovers’ Memorial Stadium, and further afield, perhaps most memorably, in Russia during the 2018 FIFA World Cup.

The 35,000-seater Ekaterinburg Arena consisted of an enormous, if slightly nauseating temporary stand, made from a gigantic stack of scaffolding stretching 45 metres up into the air behind one of the goals. This was in order to meet FIFA’s regulations stating that each World Cup venue must have a minimum capacity of 35,000, and was certainly an innovative way to do so.

What Sort of Legacy Do Stadiums For Big Sporting Events Typically Have?

While that stand has enjoyed more longevity from a World Cup than the Ras Abu Aboud Stadium looks destined to, not all arenas made for the biggest sporting stages have forged such a great legacy.

Away from football, the several Olympic Games stadiums that have been taken over by various clubs afterwards have seen mixed success; most notably West Ham’s much-maligned London Stadium, and Italy’s Stadio Olimpico, home to Roma and Lazio, with the common factor being a lack of atmosphere generated by the enormity of the distance between spectators and players.

As for World Cup arenas, post-tournament struggles have also become more frequent. 2010 hosts South Africa, for instance, have had difficulty filling the stadiums initially used for the competition, while José Cruz, a sports reporter living in Brasilia, Brazil has said that many of the stadiums in the country “have become a mark of shame” since their hosting of the 2014 World Cup.

For instance, the Arena da Amazônia in Manaus, Brazil, which cost up to about £230 million to make, only hosted four World Cup matches, with three workers tragically dying during its construction. It is now so underused that it takes in only a few hundred thousands of pounds in operating costs, and has reportedly been sold to the private sector despite being built largely with public funds.

With all of this in mind, then, perhaps dismantling a stadium in Qatar in 2022 won’t quiet destroy its legacy, but only begin it.