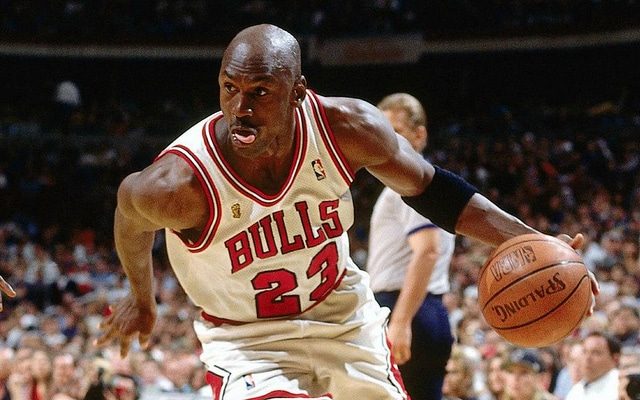 The sporting world isn’t just full of one-trick ponies; in fact, there are many professional athletes that switched sports are certain points in their career (with varying success, it must be said…).

That said, it’s worth noting that it used to be more commonplace, but sports have developed and professionalised more now. As a result, these crossovers are more seldom-seen these days as it’s too hard to split time, or for newbies to catch up with ‘lifelong’ players.

Here, we’ll be taking a closer look at five pro athletes that switched sports, as well as asking if there have been any footballers who changed sports, and whether Gareth Bale’s pretty transparent love of golf would be enough to make him a pro on the green one day, too:

First off, let’s look at five professional athletes that played two professional sports (not including footballers – more of them later)

You’ll obviously know ‘MJ’ as ‘the greatest basketball player of all time’ (not my words, the words of the official NBA website). A man who won six NBA Finals MVP awards, ten scoring titles, three steals titles and so much more, as well as holding the NBA records for career scoring average in both the regular season and the play-offs.

But what you may not remember quite so clearly is Jordan’s brief stint in Minor League Baseball, as he swapped the Chicago Bulls and the NBA for the Chicago White Sox and the MLB in February 1994, four months after his retirement from basketball.

Switching to baseball was his late father James’ idea, Jordan told The New York Times, because he felt his son possessed the requisite skills to succeed at the sport. But Jordan struggled in his sole year with the Birmingham Barons, a Double-A minor league affiliate of the White Sox, batting .202 and striking out 114 times in 497 plate appearances.

Fearing he might become a replacement during the MLB strike at the time, Jordan decided to quit baseball in March 1995, returning to the NBA later that month with a press release simply stating: ‘I’m back’.

Though he’s made his name as one of the most recognisable mixed martial artists on the planet, and as a former Ultimate Fighting Championship (UFC) featherweight and lightweight double-champion, there was a time when Irishman McGregor (or ‘The Notorious,’ as you may know him…) crossed over to boxing.

McGregor had boxed from the age of 12, and even became an All-Ireland champion as a youth, before switching his focus towards other martial art forms at the age of about 16.

But in August 2017, at the age of 29, McGregor made his professional boxing debut against the undefeated Floyd Mayweather Jr in Nevada, a bout contested at super-welterweight level, and which would see them compete for the World Boxing Council (WBC) Money Belt.

McGregor took Mayweather to a tenth round, winning the first round on all three judges’ scorecards, before a TKO sealed victory for the boxing legend. Still, the fight grossed an impressive $55.4 million from roughly 13,000 tickets sold, and Sky Sports raked in more than a million pay-per-view buys in the UK, grossing in excess of a £20 million, a new boxing record.

Joining McGregor in the professional MMA world in 2018 was Greg Hardy, better known, of course, for his career in American football, which saw him set the Caroline Panthers’ single-season record for sacks with 15 and named to the Pro Bowl and second-team All-Pro after the 2013 NFL season.

But after retiring in 2015, Hardy announced he would embark on a MMA career in October 2016 and had been training for months, despite having no previous experience in the sport.

He won his first three amateur bouts between November 2017 and February 2018, before making his pro debut at Dana White’s Contender Series 9 the following June. After beating former NFL defensive end Austen Lane by a knockout in the first round, Hardy was offered a contract by the UFC.

Hardy, in fact, won all of his first three professional bouts with knockouts inside the first 60 seconds of each, before making his promotional debut against Allen Crowder in January 2019. He lost via disqualification, hitting Crowder with his knee while Crowder was on the ground.

Still, Hardy’s MMA career continues to this day, with a record at time of writing of seven wins, three losses and one ‘no contest’ from his 11 fights.

One of Great Britain’s most successful female Olympians, you’ll remember Pendleton primarily as a track cyclist who won gold medals at European, World and Olympic level – but also as a jockey.

Indeed, in after retiring from cycling after the 2012 London Olympics (at which she won gold in the keirin and silver in the sprint), Pendleton made her competitive horse racing debut in August 2015, as she finished second in the Betfair Novice Flat Amateur Riders’ Handicap at Ripon.

She then won her first race in March 2016 at Wincanton, before riding at Cheltenham later that month, where she performed above expectations to finish fifth. She described this as one of the greatest achievements of her life, adding that she had ‘fallen in love’ with horse racing.

There’s not much Flintoff hasn’t tried his hand at – he made his name as one of England’s best cricketers of his generation, of course, but has also presented Top Gear, launched his own fashion range, been involved in real estate, co-hosted his own podcast, and starred as an actor on both stage and screen.

And after retiring from cricket in September 2010, ‘Freddie’ also briefly became a professional boxer, winning his only fight in November 2012, a heavyweight bout against American Richard Dawson after four rounds at the Manchester Arena.

Flintoff won a points decision, but has never returned to the ring professionally since – he told talkSPORT in 2020: “I realised I wasn’t cut out for boxing when I was in a gym in Battersea; this lad had the afternoon off work to spar with me, a rugby lad, and I hit him good on the chin.

“His legs went and he was wobbling, and as Barry (McGuigan, Flintoff’s trainer) was shouting: ‘Finish him’, I put my arms around him and cuddled him to make sure he’s alright. I felt really bad.”

Has a Professional Footballer Ever Changed Sports?

Yes; plenty of them, in fact. Petr Cech swapped goalkeeper for goaltender when he joined National Ice Hockey League side Guildford Phoenix, while there are many more examples of this, including:

In case you weren’t aware, Gareth Bale likes golf. Quite a lot, in fact. More so than playing football for his club, Real Madrid, if that infamous ‘Wales. Golf Madrid. In that order’ flag is anything to go by, anyway.

It’s almost become a running joke how much Bale is enamoured with a sport he doesn’t play professionally; La Libreta de Van Gaal, a light-hearted, comedic sports podcast, pieced together a montage of golf-related sentences handed down to Bale, together with the sound of a swinging golf club. Bale himself is known to have replica of the island Green, the 17th hole at TPC at Sawgrass, in his back garden, too.

And in 2020, Bale chatted and played six holes with Erik Anders Lang at Golf Santander in Madrid, where he revealed his handicap of about three or four.

By that logic, Bale wouldn’t be miles away from professional level, but given pros tend to play ‘scratch’ golf (i.e. a handicap of zero), he still has some way to go if he wants to forge a second sporting career.