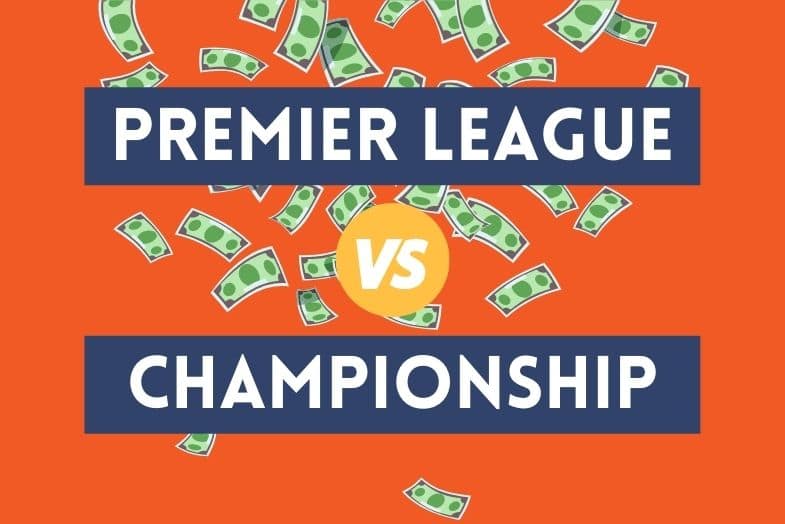 The English Premier League has consistently produced the highest revenue of the “big five” European football leagues over the last decade. In the 2018/19 season, the Premier League was the 4th highest-grossing sports league in the entire world, only behind America’s NFL, MLB, and NBA.

Much of the Premier League’s revenue comes from lucrative sponsorships and TV deals. And some of that money even flows to the lower divisions of the football league through revenue sharing. The large majority of all of that money goes to paying player wages.

But where does that leave England’s second footballing division, the Championship? Many teams in the English Championships yo-yo between the top two leagues. And hence, bring more funds to the Championship through parachute payments.

Not to mention, a portion of all that broadcasting money gets split amongst the remaining teams in the football league.

So how does the revenue and wages of the Championship compare to its much richer sibling?

These totals represent a decrease in revenue in the Premier League and the Championship of 13% and 14% respectively. And this was the first drop in premier league history. The loss in revenue shows the financial impact that COVID-19 had on both football leagues.

In the 2018/19 season, the Premier League rose to over 5.2 billion pounds in total revenue. This represented an increase of 7% from the previous season. While the English Championship brought in a comparatively paltry sum of over 785 million pounds, which was a 5% increase from the year before.

The Championship’s total take from broadcasting was down 10% from the previous season. This was due to a mix of reduced parachute payments from the Premier League, and £7 million in broadcasting rebates.

During the 2018/19 season, Premier League clubs brought in a total of £1.6bn from commercial sponsorships. The total sponsorship revenue of the Championship clubs was £187.3m.

In the Premier League’s 2019/20 season, total league spending on wages was 3.3 billion pounds. While wages in the Championship for the 2019/20 season tallied in at 813 million pounds. That means the Prem spent four times as much on wages despite having four fewer teams.

The wage to revenue ratio for Prem has increased in both of the past two years. This season’s rate of £4.5bn to £3.3bn marks a jump from 61% to 73%. Revenue was down, but spending went up!

This was the first time wages fell in the Championship since the 2003/04 season and represented a 3% drop from the previous year. However, like the previous season, total wages far exceed total league revenue. Despite the total wage reduction, Championship wages accounted for 120% of the league’s total revenue. This means many clubs would likely violate the Premier League’s Financial Fair Play rules.

Why Do Parachute Payments Exist?

When a team is relegated from the Premier League to the Championship, the club will continue to receive “parachute payments” for three years to help reduce the impact of a significant decrease in revenues following relegation.

Each Premier League team receives an equal share of broadcasting rights revenues each year and relegated sides get a smaller percentage of this fee. The year following a club’s relegation, the club receives 55% of the normal broadcasting fee that is equally shared between the clubs (worth £42.6m in 2020). In the second year, this is reduced to 45% and a final 20% payment in the third year if the club hasn’t regained their place in the Premier League.

Why is the Championship Play-Off Final the “Richest Game in Football”?

The Championship Play-Off Final is the “Richest Game in Football” because the winner wins promotion to the Premier League. And when a team reaches the top division in English football, they receive a huge injection of cash that is dispersed league-wide.

In the 2019/20 Playoff Final, Brentford defeated Swansea City 2-0 at Wembley Stadium. That single victory was estimated to be worth £178m! That number is made up of about £100m in shared broadcast revenue and an estimated guarantee of at least £75m in parachute payments.

By the end of the 2018/19 season, Fulham, Huddersfield Town, and Cardiff City had found themselves relegated from the Premier League. Fulham had been promoted the previous season by winning the Playoff Final. And each of those clubs received a reported £41.8m in parachute payments from the top division.

The Championship still pales in comparison to the Premier League when it comes to finances. Like all football leagues across Europe, the top two divisions of English football have taken a hit from COVID-19. It remains to be seen what the effect will be on future seasons.