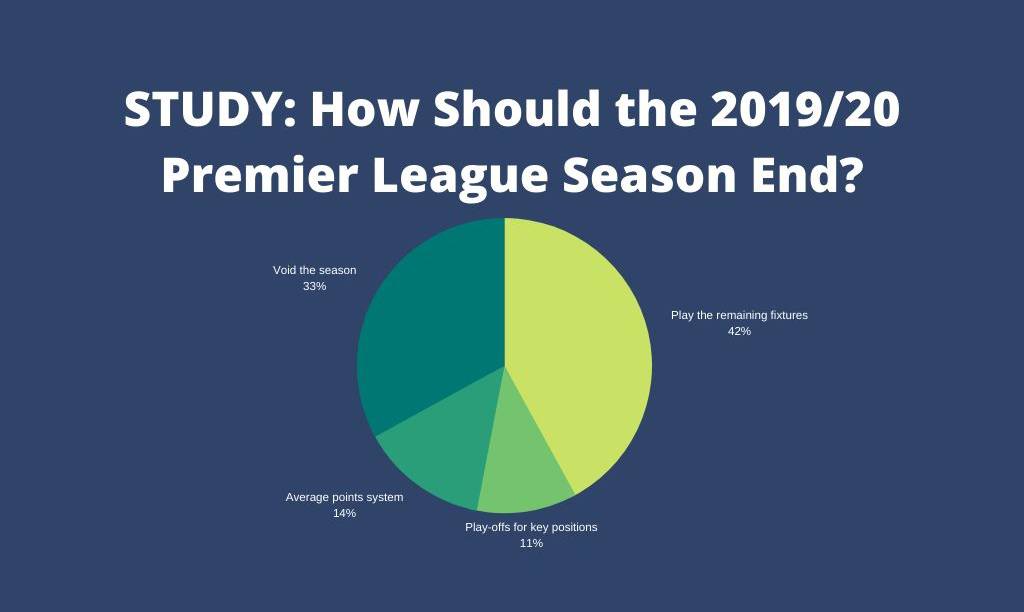 A survey conducted by sports website, SQaF.club, has found that only 42% of football fans think that the remaining fixtures of the 2019/20 Premier League season should be completed.

The survey, which saw 332 responses, asked “How Should the 2019/20 Premier League Season End?“. Fans were given four options to choose from:

Below is a full breakdown of the results:

Yes, winning almost half of the votes, the most popular choice prove to be the idea of finishing the 2019-20 campaign no matter how long it takes.

This would obviously benefit the likes of champions-in-waiting Liverpool, who could wrap up the title they’ve craved for 30 years, as well as Leicester and Sheffield United, for instance, who are both unlikely contenders in the race for European football.

There are numerous forms the rest of the campaign could take if and when it resumes. We may wait until it is entirely safe to continue as normal, with stadiums packed to the rafters, or see it out behind closed doors, with only players, coaches, media, medics and other indispensable match officials allowed in the ground.

Another suggestion was to play the remaining games behind closed doors in the Midlands and London, namely at St. George’s Park (England’s training ground) and Wembley Stadium, keeping players and staff in isolated camps to cut them off from the outside world.

Earlier this week, the English Football League reportedly earmarked Saturday, June 6 as a potential return date for the Championship down to League Two, with the hope of completing the campaign within five to six weeks. Whether that proves viable, and whether the Premier League would follow suit, remains to be seen.

Either way, there is another shareholders’ meeting of each of the 20 top-flight clubs on Friday, April 17. The issue for now, though, is that until we pass the point at which COVID-19 peaks in the UK, we’re all rather in the dark.

The second-most popular choice, with roughly one-third of the votes, was to effectively write off the season, act as if it never happened, and start again with 2020-21.

In theory, this would seem the most straightforward; it would be far less time-consuming than completing up to ten rounds of fixtures (not including the addition of the play-offs lower down the pyramid). Yet in practise, this may be like opening a can of worms, given the financial and legal implications it could trigger.

What for the teams fighting to beat the drop? Or for those at the top end of the Championship, desperate for the monetary windfall that promotion to the top-flight brings? Or for Liverpool, 25 points clear at the top of the table and champions in all but name?

It would certainly test the limits of even Premier League clubs, too; Burnley have warned they could lose up to £50 million if the season is not completed due to loss of revenue.

Just 14 per cent of you voted to truncate the campaign and essentially use the current standings as final. Liverpool would be champions, Leicester would make the Champions League, and Bournemouth, Aston Villa and Norwich would be relegated.

Again, those of whom this would deal a bad hand would likely, and rightly, feel a grave sense of injustice, though it is arguably a more sensible solution than voiding the season and wasting the last nine months.

This is rather like what Belgium look set to do; what was left of the 2019-20 Pro League season is on the verge of being cancelled subject to a vote between the league’s 24 member clubs later in April, which would see current leaders Club Bruges crowned champions.

The least popular option, only 11 per cent of those who voted plumped for the revolutionary idea of having play-off matches to decide title-winners, European places and relegation spaces.

This theory was first put forward when the Italian Serie A was first suspended, though it is so unprecedented that quite how it would work is anyone’s guess and seems another unlikely and overly unfair way of ruling on this matter.

Comment Below: How do you think the 2019/20 season should be concluded?