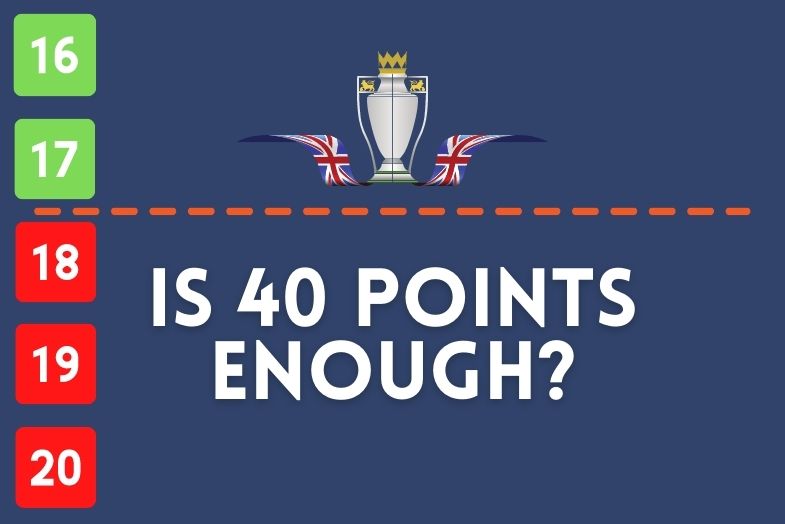 Since its inception in 1992, the English Premier League has offered up some wonderfully competitive and extremely tight relegation battles.

Dropping out of the most lucrative league in the world is a disaster for any club, and it is well known that returning to the top league via the ultra-competitive English Championship is by no means a given.

Many so-called ‘big clubs’, after dropping out of the Premier League, have slipped even further down the league ladders – so survival is absolutely crucial.

But how many points does a club need to avoid the dreaded drop? Is the magic number really 40 points? And how much has the relegation dogfight changed over the years in terms of how many points are needed to stay in the Premier League?

Just as the number of points needed to win the league each season can vary hugely, the same is true of the points required to survive.

Has Anyone Ever Been Relegated with 40 Points?

So the mythical 40 point mark that is said to guarantee Premier League safety is just that – a myth.

Birmingham City were relegated in the 2010/11 season despite accruing 39 points, while in 1995/96 Manchester City failed to survive despite earning 38 points, being relegated by only seven goals, with Southampton surviving with 38 points and a goal difference of -18.

If you think that is unlucky, spare a thought for the Sheffield United team of 2006/07, who reached 38 points with a -23 goal difference only to be relegated by a single goal, with Wigan Athletic surviving on 38 points and a -22 goal difference. Heartbreak for the Blades.

Highest Points Total to Be Relegated from Premier League

West Ham United earned the unwanted record of the highest points total to be relegated from the Premier League when they reached 42 points in the 2002/03 season and still finished in 18th position, two points behind Bolton Wanderers.

The Hammers won 10 and drew 12 of their 38 games, including home and away victories over London rivals Chelsea, and averaged more than a goal a game during the course of the season.

They lost manager Glenn Roeder to illness in April after he won the league’s Manager of the Month award in March (with club legend Trevor Brooking taking over as caretaker manager), and striker Jermain Defoe was nominated for Young Player of the Year at the end of the season.

They had finished seventh in the Premier League the previous season, narrowly missing out on European competition, but despite a squad containing several then-current or future England internationals, including David James, Trevor Sinclair, Joe Cole, Jermain Defoe, Glen Johnson and Michael Carrick, a terrible start to the season saw them win just three out of their first 24 matches, and the club found themselves bottom of the table at Christmas with just 16 points.

Despite a late-season run of good results, their 10-year stay in the Premier League came to an end with a 2-2 draw against Birmingham City while Bolton were defeating Middlesbrough 2-1 to ensure their safety on the final day of the season.

How Many Points to Guarantee Premier League Survival

Technically, the points total that must be reached to guarantee Premier League survival is 43, as no club has ever earned that many points and been relegated. West Ham earned 42 points in 2002/03 and were relegated.

But what are the chances of staying in the Premier League by accruing fewer points than the elusive 43? Here’s the statistical evidence given what we have learned from the 26 seasons of a 20-team Premier League season, based on the points required to finish 17th in the league each year.