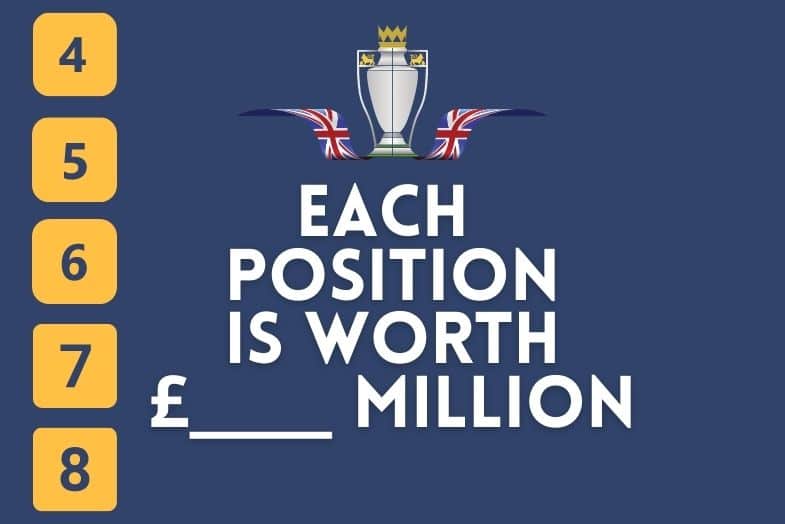 The Premier League is known for being the richest domestic football competition in the world. With viewing figures regularly hitting the millions, it’s easy to see why sponsors and TV broadcasters bid so much to be involved. From multi-billion-pound TV deals to colossal sponsorship partnerships, it seems that Premier League clubs make money just by existing.

With so much cash flowing through each team, survival is essential and clubs at risk of relegation will make desperate attempts at staying up. That might mean splashing out in the January transfer window to strengthen the squad or sacking a manager for one with a track record for survival. It might even mean making the call to Sam Allardyce to dig your club out of a hole!

Reaching the promised land of the Premier League is the ambition for most lower league teams. Of course, all fans want their teams to play in the spotlight but owners want to make that guaranteed cash that England’s top division provides.

But how much do Premier League teams make and is their position in the table really all that important? Let’s take a closer look at the Premier League prize money by position.

How Much Do Teams Get For Being in the Premier League?

In addition to that equal share of half of the domestic TV money, teams are awarded a share of 25% of that deal depending on their league position. The final 25% of the domestic TV deal prize money is allocated for facility fees, which is a fee given each time a team appears on a live UK broadcast.

These facility fees are approximately worth £1.2 million per game, so the more popular a team is, like Manchester United or Liverpool, the more they make. Less popular or ‘attractive’ teams, typically relegation candidates, are on TV much less frequently and so cannot earn as much through facility fees.

The total Premier League prize money combines their equal share of the TV prize money, their facilities payments per broadcast and merit share based on league position. Finishing near the top and being on TV lots can land a club as much as £150 million. Teams at the bottom still earn close to £100 million.

Relegation from the Premier League comes with a £100 million payout plus parachute payments for the following three seasons to soften the blow. The prize money is a large reason why Premier League teams are regularly competing at Europe’s top table once more as their squads are filled with stars.

Teams like Liverpool, that aim to be somewhat self-sufficient, would struggle to keep up with the likes of City and Chelsea through commercial revenue alone. While gate receipts and matchday income matter, the biggest game changer for English teams is the TV broadcasting revenue. With broadcasters around the world clamouring for the rights to showcase the Premier League, it’s the teams and fans that benefit with the embarrassment of riches it brings.

Teams in the Premier League enjoy great financial benefits that many of their continental rivals can only dream about. Even finishing at the south end of the table results in a windfall most other teams from around the world can only dream of.

In addition to this guaranteed money for league position, teams are given a minimum of £10 million more in facilities fees. These are given to clubs for appearing on a domestic live broadcast and for being shown in 10 or fewer of these games teams receive £10m.

However, big clubs with huge fan bases are more in demand and can appear on live broadcasts much more often. For example, in the 2020/21 season, Liverpool received £35 million in facility fees, despite finishing in third. Manchester City, on the other hand, received £33 million despite ending the season as champions.

What is Each Premier League Place Worth?

Climbing up the table is worth roughly £2 million per place. The team that finishes last in the 2021/22 Premier League season will earn an estimated £2.5 million. Each place above will increase incrementally by approximately £2 million, with the eventual winners expected to earn circa £40 million.

But, this is just for the merit share of the Premier League’s TV money. While there is a large disparity between top and bottom teams in terms of merit share, ultimately teams make at least circa £100 million regardless of league position.