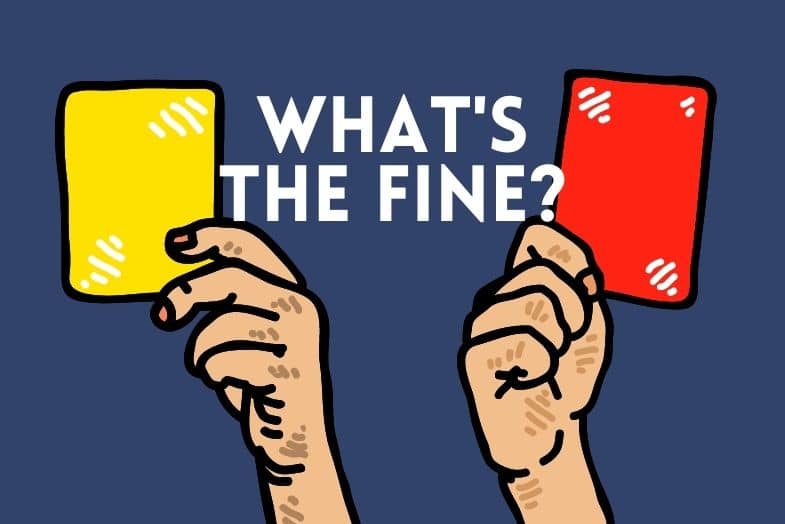 Whether it’s committing dangerous fouls or removing a piece of clothing, professional footballers can be booked for several different incidences in the modern game.

These bookings are followed by fines, an official caution or dismissal from the referee which affect every team and its players; from the greatest leagues in Europe to the amateur Sunday league fixtures at the weekend.

But do Premier League players personally pay the fines? And if so, how much do they have to pay?

Join us as we go through the financial repercussions that England’s top-flight footballers face when they are booked in the modern game.

Do Premier League Players Get Fined for Bookings?

Premier League players are fined when receiving a booking, with additional fines potentially being added depending on the severity of the booking incident.

Alongside being fined for bookings, players are suspended for specific periods with the length of the suspension varying depending on whether they received a straight red card or two yellows in a match.

A sending-off due to a second yellow card will result in a one-match ban, as will a red card received for a professional foul. Violent conduct is punishable by a three-game suspension whereas dissent from a player leading to a red card can earn them a two-match ban.

How Much is the Fine for a Yellow Card in Premier League?

Players can receive a fine of £10 per yellow card as well as an additional £15 fine for every five yellow cards received. Fines and charges are administration fees imposed by the Football Association (FA).

Premier League sides can be fined up to £25,000 by the FA if the team has six or more players cautioned or dismissed during a single match.

Whilst the FA is responsible for these disciplinary actions, they also ensure that these fines are set for every tier of football across the country from the EPL to Sunday League.

In addition to the fines, players can be given suspensions for accumulating multiple yellow cards. If a player receives five yellow cards, they are suspended for the next match, while receiving 20 yellow cards means they would automatically face a disciplinary board and receive a five-match ban.

How Much is the Fine for a Red Card in Premier League?

Players can receive a £30 fine for receiving a red card during a match, with the suspension length differing depending on the severity of the red card offence and how the player deals with the situation.

While yellow cards are used to caution players for rough tackles, handball, dissent, among other things, a red card is more severe and decisive as the player is forced to leave the pitch immediately and suspend them for a minimum ban of one match.

The active player in the Premier League with the highest number of red cards is West Ham captain Mark Noble, who has received five bookings over his 405 EPL appearances.

Retired referee Mike Dean holds the record for the highest number of red cards distributed by a referee in the Premier League. The 52-year-old has given out 110 red cards and 1,927 yellows – over 500 yellow cards more than any other official in the English game.

Dean’s ruthlessness with the red card significantly affects the players he referees, he has an average of 10.8 fouls resulting in free kicks in his games which is half the number of a standard EPL game average (20.9 fouls).

Who Pays the Fine for Bookings: Clubs or Players?

Although Premier League clubs cover several expenses for their players such as kits, meals, and hotels, they do not pay for individual players’ booking. Players must pay the fine themselves and can be fined additionally by their club depending on the severity of the fine/suspension.

As previously mentioned, clubs can be fined £25,000 themselves if six of their players receive yellow cards during a single match. Technological advancements in officiating such as the video assistant referee (VAR) have made it more likely for players to receive bookings as officials can look back and judge incidents closer.