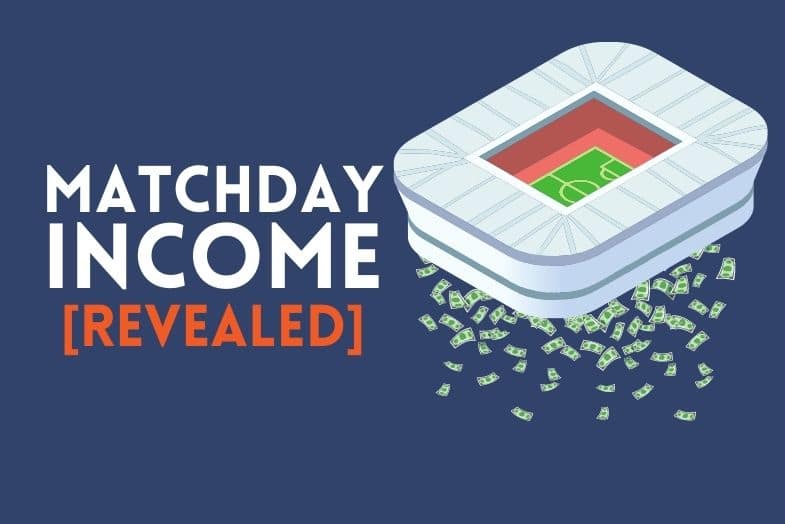 Once upon a time, English clubs relied on matchday revenues as the primary source of income. Of course circumstances have vastly changed now, as broadcasting money has dwarfed all other sources, including box office revenues.

And yet, matchday income remains an important source that allows the team to balance the numbers on the budget. We all saw how clubs all around the globe massively suffered during the Covid-19 pandemic.

In England, Premier League sides could always rely on packed stands filled with passionate supporters. Hence, the empty stadiums left their mark on the balance sheet.

So how much do EPL sides make from matchday income? How much do they make per game? And how are gate receipts split?

We’ll try to answer all these questions and more in our study below.

Matchday income is the total revenue generated by a club when hosting a match on home turf. Naturally, box office income is the largest percentage of the matchday revenue, but it also includes food and beverage sales, as well as merchandise sales.

Since the Premier League is the home of some of most tremendous stadiums in the world, this allows the clubs to generate significant revenues from their home fixtures.

For instance, Tottenham Hotspur is believed to generate around £800,000 per game from food sales alone according to Iterpro.com. The club had launched their new stadium back in 2019.

As detailed in another study by SQaF, matchday income consisted 13% of the total income of Premier League clubs in the era that preceded Covid-19. On the other hand, TV money made up almost 60% of the clubs’ incomes, while commercial revenues averaged around 27% of the total income.

When it comes to matchday income, gate receipts is by far the most significant resource. However, its importance varies between one club and another based on several factors, including the capacity of the stadium and the general status of the club.

For instance, Premier League clubs with bigger stadiums are able to host a higher number of supporters, which translates into more money.

As for the club’s status, the bigger clubs will normally charge fans with higher ticket prices. After all, this is the law of supply and demand. A side containing world class players (like Chelsea or Man City) will attract a bigger number of supporters in attendance than the likes of Burnley or Brighton (with all due respect to their loyal fanbases).

According to the Daily Mail, Chelsea generated more matchday money per supporter than any other EPL side in the 2018/19 season. The average Blues fan (who regularly attended matches at the Stamford Bridge) spent £1,648 during that campaign. On the contrary, Huddersfield came last, collecting 215 pounds per fan on average.

In the Premier League, the home side exclusively receives the money generated from gate receipts. Every season, each club hosts 19 league fixtures, and is entitled to earn all the cash generated from its home games.

On the contrary, gate receipts are equally split between the two sides in the FA Cup matches from the third round all the way to the Quarter Finals. That is because the competition is played on one leg, and the draw determines the home side. Therefore, it would be unfair to grant the whole matchday spoils for the hosts simply because they were favoured by the draw.

How Much Do Premier League Teams Make Per Game?

Now it’s time to find out how much every Premier League club makes per game from matchday income. Obviously, the post-Covid era has been marred by empty stadiums and at times reduced capacities. Thus, we’ll base our study on the 2018/19 campaign (as per footballcritic.com), which was the last full season to be completely unharmed by the worldwide pandemic.

How Much Do Manchester United Earn Per Game?

Manchester United is the club that generates the biggest average income amongst Premier League club. The Red Devils earn circa 3.96 million pounds for every league fixture played at the Old Trafford Stadium.

Luckily for United, their stadium is the largest in terms of capacity (in the exception of the London Stadium which is currently used by West Ham United). Therefore, the ‘Theatre of Dreams’ allows the club to host the biggest average crowd attendance in the league by far, and subsequently enjoy the largest matchday income in England.

How Much Do Liverpool Make Per Match Day?

Liverpool earn approximately 3 million pounds on average for every Premier League fixture taking place at Anfield. Although the Reds’ stadium isn’t the biggest, they can always rely on an extremely loyal fanbase to fill it.

How Much Do Chelsea Make Per Game?

Chelsea earn around 2.08 million pounds as an average matchday income. Unfortunately for the West London side, the Stamford Bridge is the smallest stadium adopted by a top EPL side (41,837 seats).

But as we mentioned above, the Blues make up for it by generating the largest matchday income per supporter (£1,648 during the 2018/19 campaign).

How Much Do Arsenal Make in Match Day Income?

Arsenal generate about 3.1 million pounds per game from matchday income. The Gunners have a large fanbase in the English capital, and possess a modern stadium (the Emirates Stadium) that has proven to be a major cash cow since its opening in 2006.

How Much Do Man City Make Per Game?

Man City earn approximately 2.08 million pounds on an average home match in the Premier League. The Cityzens have been the most successful club in the league during the last decade, but their income remains a far cry from the one generated by their crosstown rivals.