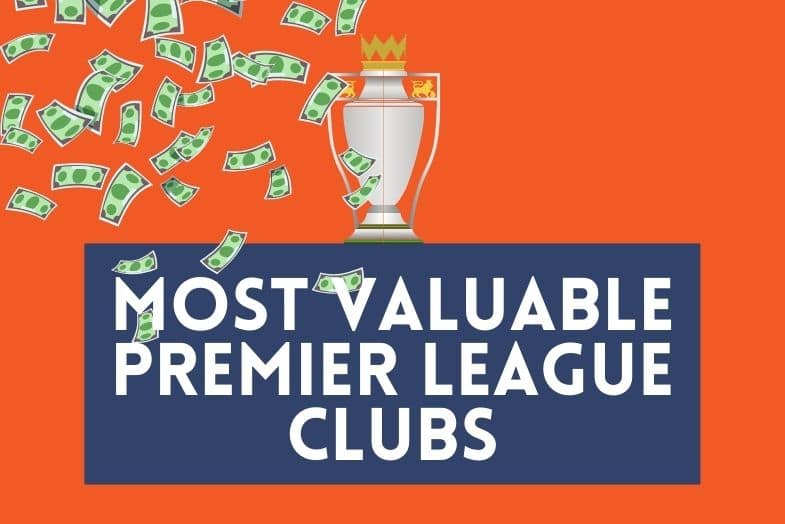 Following the creation of the Premier League, English football slowly but surely regained its status at the very centre of the sport.

While the other top European leagues each possesses a few big clubs who can compete at the highest level, the quality found in England’s top tier (from top to bottom) remains unparalleled.

In this regard, the numbers tell the whole story. It’s sufficient to take a glance at the values of EPL sides to understand the sheer size of the football business on the English shores, and why some of the richest men on the planet are tempted to buy themselves an English club.

So how much is each Premier League club worth? Which side has the highest value? And how are these values calculated anyway?

What Are Premier League Club’s Worth?

According to Sportico, the average value of a Premier League club is 960 million pounds. However, the gap between the values of the top clubs and the smaller ones is enormous.

For instance, the same study reveals that the average value of the traditional Big Six (Manchester United, Arsenal, Chelsea, Manchester City, Liverpool and Tottenham) is 2.747 billion pounds. On the other hand, the other 14 clubs combined are worth a similar figure (£2.77bn).

Moreover, the 20 Premier League clubs that participated in the 2020/21 edition were worth 18.7 billion pounds in total.

How Are Premier League Club Valued?

Although we don’t have a universal way to value football clubs, the Multivariate Model developed by Tom Markham in 2013 remains the most recognised due to its accuracy. This system is primarily based on revenues, transaction fees and assets owned by the club.

For math fanatics, the Markham formula goes as the following:

In short, the value of the club is based on it’s revenues (sponsorships, TV rights, prize money…), assets (players, stadium…) as well as its net profit. Moreover, the value of the brand should be added to the club’s total value.

However, we must admit that estimated club values (whether based on Markham’s model or another one) aren’t always adopted when a club changes ownership.

For instance, the Sport Republic group has recently bought 80% stake at Southampton for a reported 100 million pounds. But as we shall see, this figure is significantly smaller than the club’s estimated value.

Reminiscently to all other businesses, the clubs’ actual prices also depend on the laws of supply and demand, as well as the negotiating skills of the parties involved in the deal.

In this section we’ll determine the total value of every Premier League club from the 2020/21 season as reported by Sportico.

How Much is Man Utd Worth?

Manchester United is currently valued at around 3.48 billion pounds. Even though the Red Devils’ last league triumph goes all the way back to Sir Alex Ferguson’s era (2013), the club remains the biggest in English football.

Around two decades of dominance under the guidance of the legendary Scot allowed United to build an enormous fanbase that surpasses all borders.

According to Statista, the brand value of the club is worth 992 million pounds on its own. If we add the the fabulous Old Trafford Stadium to the equation, plus a squad that boasts some of the biggest superstars in the world, it’s easy to understand the club’s astronomical valuation.

How Much is Liverpool Worth?

Liverpool’s total value is currently estimated at around 3.095 billion pounds. In this regard, the Reds are second, just behind their arch-rivals Man United.

Despite being one of the most successful clubs in the history of English football, as well as the most successful English team in the Champions League, 30 years of drought on the domestic level took its toll on the club, as it struggled to compete against some of the other top European clubs when it came to building overseas fanbases.

Luckily for the Merseyside boys, German manager Jurgen Klopp succeeded in restoring the club’s glory following his arrival in 2015.

A Champions League triumph in 2019 followed by a Premier League title a year later cemented the club’s position amongst the elite at the European level, which massively helped in attracting new supporters and elevating the value of the brand.

How Much is Man City Worth?

Manchester City is worth approximately 3 billion pounds. In the current day and age, the Cityzens arguably posses the most formidable squad in the Premier League.

Even though the club’s trophy cabinet isn’t as large as the ones found at some of the other top EPL sides, Man City has made leaps and bounds in the last decade or so under the ownership of the multi-rich Sheikh Mansour Bin Zayed Al Nahyan who was never afraid of spending cash in order to bolster his squad.

The Sky Blues have been the most successful side in the Premier League during the last decade, and the club’s brand value gradually rose from 127 million pounds in 2011 to reach 981 millions in 2021.

If the club continues on the same successful pattern, then it’s total value could overcome that of Man United in the coming years, in what would have been an unthinkable scenery in the previous decades.

How Much is Chelsea Worth?

Chelsea is currently worth 2.5 billion pounds. Despite being one of the most consistent clubs in terms of results since Roman Abramovich’s acquisition in 2003, it remains behind Liverpool and the Manchester pair in terms of total value.

While the Blues’ squad features some of the best players in the world in every department, the relatively small capacity of the Stamford Bridge (40,834 seats) is one of the main factors that prevents the club from reaching the summit of the list related to club values.

How Much is Arsenal Worth?

Arsenal is worth approximately 2.288 billion pounds. The Gunners have failed to replicate the success found under the guidance of Arsène Wenger between the end of the 20th century and the beginning of the new millennium, but they remain amongst the traditional big clubs in England, especially in terms of profits.

The North London side no longer possesses the host of stars that once graced the pitch at the infamous Highbury Stadium, instead, it adopted a policy based on investing in youth talent, meaning that the value of the Arsenal squad pales in comparison to the other top Premier League clubs.

Nevertheless, Arsenal’s fabulous Emirates Stadium is a great source of income for the club, while they can always rely on a loyal fanbase.

Which Premier League Club is Worth the Most?

With a total value of 3.476 billion pounds, Manchester United is the Premier League’s most valuable club. The podium is completed by the Red Devils’ two main rivals, Liverpool (3.095 bn) and Manchester City (2.99 bn).