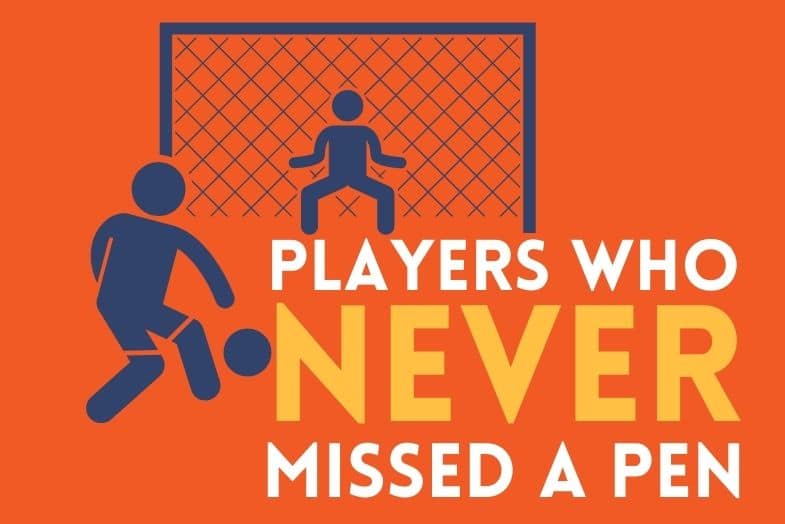 A massive cheer goes up around the stadium as the referee points to the spot and awards the home side a penalty.

It’s almost as if the goal has already been scored. How hard can it be for a footballer to hit the net from 12 yards with only the keeper to beat with the goal frame 24 feet wide and 8 feet high?

Well, it might actually be more difficult than you think. In professional football since 2009 more than 100,000 penalties have been awarded, and around 25 per cent of them were not scored.

So, is penalty taking an art form? Is it more about luck than skill? And which players have been most successful from the spot?

Most Penalties Scored without Missing

The former Southampton man Matt Le Tissier can count himself unfortunate not to be higher up this list of penalty-scoring streaks.

Le Tissier took 49 spot kicks in his career, scoring 48 of them, and is widely regarded as the best penalty taker to grace English (or even world) football.

However, his one miss came exactly in the middle of those 49 penalties when his effort against Nottingham Forest was saved by goalkeeper Mark Crossley (a save that Crossley described as the best of his career), meaning Le Tissier ended up with two streaks of 24 penalties scored.

Which Player Scored the Most Penalties without Missing?

Little-known Albanian international Ledio Pano has the official world record for scoring all 50 of the penalties he took during his career playing in Albania and Greece.

In Albania he played for Partizani Tirana, where he began his professional career, and Luftëtari Gjirokastër. He played much of his career in Greece with Skoda Xanthi, Panelefsiniakos and PAS Giannina, and earned nine caps for his country.

In English football, reliable midfielder Yaya Toure took 15 spot kicks for Manchester City without missing, proof that it’s not just the centre forwards you can look to for goals in the English Premier League!

8 Players Who Never Missed a Penalty

Below are the players, past and present, who never missed a penalty after taking 10 or more spot kicks.

So there you have it. Even the best players can falter from 12 yards when the pressure is on, but some seem designed for handling the situation when called upon.

Will Ledio Pano’s record of 50 penalties without missing ever be beaten? Who knows? But it will require nerves of steel (and a bit of luck!).