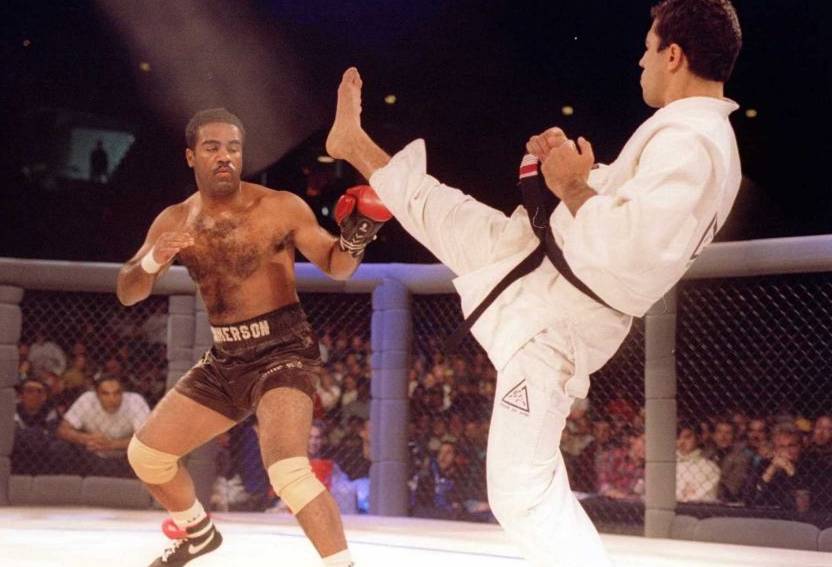 Remember when the only rule of Ultimate Fighting Championship (UFC) was that there were no rules? No, me neither.

Because, while that might have been the tagline that the UFC started with, it was always somewhat wide of the mark. There have always been guidelines for competitors in the division to adhere to.

But what were the initial rules of UFC? And how have they changed over time from what they were then to what they are now? What are the current UFC rules on slams, kicking and head-butting, for instance? Let’s take a look:

On November 12, 1993, the UFC had liftoff. Its first event, ‘UFC 1: The Beginning’ involved an eight-man tournament with a $50,000 prize for the winner, staged at the McNichols Sports Arena in Denver, Colorado. Royce Gracie would be crowned champion after defeating Gerard Gordeau via submission due to a rear naked choke in the final

And despite marketing itself as having no rules, there were indeed boundaries for the fighters: namely no biting, eye-gouging or groin shots (these could be punishable by a $1,500 fine). Other initial UFC regulations included:

The initial aim was to make UFC look as brutal as possible on television, so it was decided that the fights were to be held in octagonal cage with chain link fencing. Moves like hair-pulling, fish-hooking, head-butting were also permitted.

Certain more barbaric ideas were rejected, though, such as ‘finishing’ off opponents with moves like ripping their spines out of their bodies as an homage to the video game ‘Mortal Kombat’, or topping the cages with razor wire.

Indeed, the first match of UFC 1 set the tone as far as brutality as concerned, as eventual winner Gordeau kicked opponent Telia Tuli, already on the floor, so hard in the face that one of his teeth went flying past the announcer’s table.

Despite the meteoric rise of UFC since then, its first event was far from the greatest success. A 16-man tournament was the initial aim but many A-list martial artists had no interest in joining. It then filled out less than half the arena with 7,800 attendance, and a pay-per-view buyrate of only 86,000.

When Did UFC Rules Change?

A qualifying match for December 1994’s ‘UFC 4: Revenge of the Warriors’ seemed to set the tone for a change of rules.

Fighters Jason Fairn and Guy Mezger, both sporting pony tails tied back for their bout, agreed not to pull each other’s hair, shortly followed by a fight at the same event between Keith Hackeny and Joe Son, in which Hackney aimed for Son’s groin while he was on the ground.

Yet the violence still persisted. So much so, in fact, that that many US authorities soon announced their opposition to UFC. John McCain, a State Senator for Arizona, led a campaign to ban the competition, labelling it ‘human cockfighting’, and sent letters to governors of all 50 US states encouraging them to ban it.

Eventually, 36 states banned ‘no-holds-barred fighting’, and the UFC compromised by rewriting its rulebook. UFC 12 (‘Judgement Day’) in February 1997 brought in weight classes and banned fish-hooking. Gloves became compulsory by UFC 14 (‘Showdown’) in July 1997, which also saw a ban on kicking the head of a downed opponent brought in (see next section for further reforms).

All the while, the UFC continued to work with state athletic commissions in an attempt to educate and change common perceptions about a sport widely considered barbaric in the extreme.

UFC commissioner Jeff Blatnick, referee John McCarthy and matchmaker Joe Silva compiled a manual of policies, procedures, codes of conduct, and rules to help the UFC be sanctioned by these commissions. By early 2000, California became the first state to sign off an a set of codified rules governing MMA.

The eight current main rules of UFC are as follows:

A fighter can win (or draw) a bout in UFC by the following methods: