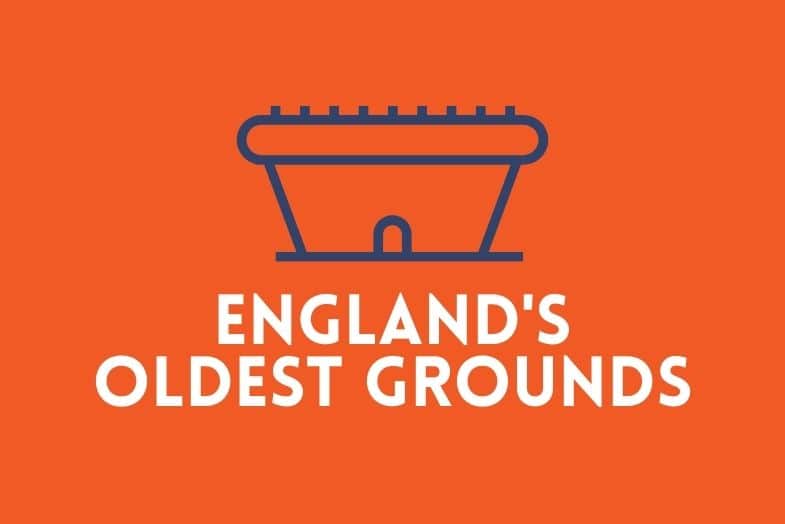 Football has been around for much longer than most other popular sports around the globe. It may have only been inflated pig bladders being kicked, punched, and thrown around a muddy field in the past. But today, it is a highly complex yet simple game.

As the original codifiers of Laws of the Game as we know it today, England has many of the oldest components of football. Some earliest football clubs were founded here on the island and many of those include non-league football clubs.

But England also boasts some of the oldest football stadiums in the world that are still currently in use.

Most Historic Football Grounds in England

What Was the First Football Stadium Built in England?

Which stadium was the first built for football is hotly debated in England. Bramhall Lane in Sheffield was completed in 1855 but was originally a cricket stadium. Sheffield FC used the ground from 1873-1884 and Sheffield United has been playing there since 1889.

The first game of football was played at Bramall Lane on the 29th of December in 1862.  This was before the rules of the game had been codified by the English FA and were played according to the “Sheffield Rules” of the time.

Deepdale was built in 1875 in Preston with Preston North End using the ground since 1878. The club and its supporters claim the stadium to be “widely recognised as being the oldest and continuously used” football ground in the world.

What is the Oldest Stadium Still in Use?

Bramall Lane in Sheffield is the oldest football ground in England still in use today. The ground was originally built for cricket but has been used for football since at least 1861.

Both Sheffield FC and Sheffield United have used the stadium for home matches. The former is the oldest football club in the world. The latter has played in the stadium since 1889.

Since its original construction in 1855, Bramall Lane has had the following renovations:

The record attendance for the ground during a football match was set during an FA Cup tie between Sheffield United and Leeds United in 1936. The final tally was 68,287 spectators in attendance! Normal for its time, this would have been standing room only.

After the nightmare of the Hillsborough disaster that claimed at least 97 lives, a full investigation was conducted. These findings and recommendations were published in the Taylor report which led to the gradual elimination of non-seated stands. As such, Bramall Lane currently has a maximum capacity of 32,050.

What is the Oldest Football Stadium in the Premier League?

The oldest football stadium in the English Premier League is Stamford Bridge, where Chelsea FC ply their trade. The ground was built in 1876 and was originally used by the track and field-based London Athletic Club until 1904. Chelsea has been using the stadium since 1905.

Chelsea FC was founded in 1905 by Gus Mears. However, starting a football club was never Mears’ intention. He purchased Stamford Bridge in 1904 in hopes of leasing it to Fulham FC.

Spurned by the loss of a financial opportunity, Gus created his own football club to play in the London borough of Fulham. Since the name of Fulham was already taken, Gus opted for the name of the nearby borough of Chelsea and the rest is history!

Constructed in Bradford City, Valley Parade was completed in 1886. It has been the home of Bradford FC since 1903 and currently has the name of Utilita Energy Stadium for sponsorship purposes.

Gigg Lane was built in the Greater Manchester town of Bury in 1885. Bury Football Club have been playing there ever since the stadium was built. Bury were expelled from the Football League in 2020 and the ground was put up for sale in 2021. Recently, a supporters group was able to purchase ground with the intent to reopen in August of 2022.

Portman Road is a football stadium based in Ipswich, Suffolk and first opened in 1884. Ipswich Town F.C has been playing in the ground ever since. After expansions in 2002, the ground can seat up to 30,311 people.

Anfield was built in Liverpool and opened in 1884. As the older club, it was Everton who initially played at the famous ground from 1884- 1892. Since then, it has been the intimidating home pitch of Liverpool FC. Its current capacity is 61,905.

Turf Moor was built in 1883 in Burnley and has hosted the football club of its namesake (Burnley FC) since it opened. The seating capacity of the ground is 21,944.

Based in Blackburn, Ewood Park first opened in 1882. Blackburn Rovers have played in the four-stand, all-seater stadium since 1890. Its current capacity is 31,367.

Stamford Bridge was built in Fulham in 1876 and was originally designed with an oval ground for track and field. Since 1905, the ground has served as the home for Chelsea FC and has a capacity of 41,837.

Deepdale has been hosting Preston North End matches since 1878. However, the stadium was built on Deepdale Farm in 1875. The ground has a capacity of 23, 408.

Field Mill opened and began hosting football matches as early as 1861 in Mansfield, Nottinghamshire. It is hotly contested by some that Field Mill is the oldest ground in the Football League, some evidence pointing to football matches as far back as 1850. Mansfield Town has been playing in the ground since 1919.

Built in Sheffield, Bramhall Lane was constructed in 1855 and was originally a cricket ground. Sheffield United have been playing in the ground since 1889 and after several renovations, the stadium holds a maximum capacity of 32,050.