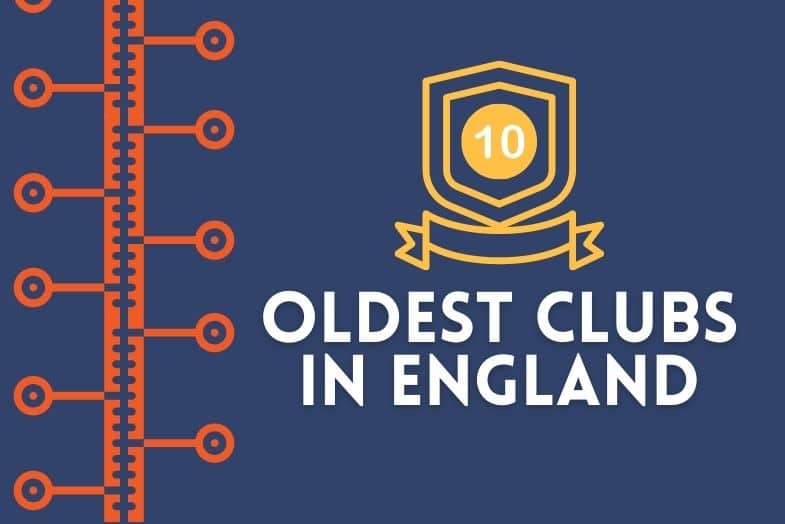 While there have been several teams in the Football league over the past few years who have faced the fear of liquidation and threat of closure, the average English football fan will be grateful that their club has been able to endure for so long.

With traditions, history and memories all engraved into a football team, some clubs have been around for even longer than you might first assume.

Who is Oldest Football Club in England?

Sheffield Football Club are the oldest club in England, having been founded in 1857 by members from the Sheffield Cricket Club.

Although many football fans may be aware of the club’s status as the first founded in England, the Non-League Division One side are not currently in the English Football League; a set of professional divisions that contain the EFL Championship, League One and League Two.

Founded in 1863, Stoke City are the oldest club currently in the Football League after being founded by four members.

The now EFL Championship side were originally called Stoke Ramblers until the club underwent a merger to be renamed Stoke in 1878. This was followed by the club being liquidated in 1908 only to be refounded shortly after.

The current Stoke City crest contains 1863 to signify its foundations, however, this date has been questioned due to a lack of evidence surrounding the club’s mentioning in any dates earlier than 1868.

Nottingham Forest are the second-oldest football club in the Football League, having been founded in 1865 by a group of shinney players in the Midlands.

The first players met at the Clinton Arms on Shakespeare Street, officially proposing and founding Nottingham Forest Football Club as well as choosing Garibaldi Red as their official team colour.

In 2019, the EFL released a statement that Forest were officially the oldest club in the Football League after Notts County Football Club, who were founded in 1862, were relegated to the Vanarama National League and therefore no longer part of the Football League.

This was contested by Stoke City, who claimed to have been founded in 1863, however, few records are supporting either club’s claims.

Founded in 1867 as The Wednesday Football Club, Sheffield Wednesday are the third-oldest club in the Football League after being born from members of the Wednesday Cricket Club.

Despite the foundation date being disputed, the first reported practice match was on 12 October 1867 while their first competitive fixtures were in February 1868 in the Cromwell Cup. They officially adopted the name Sheffield Wednesday in 1929.

The club changed their official nickname to ‘The Owls’ in 1899 after the club moved to Owlerton. However, it was not until a Wednesday player named George Robertson presented the club with an owl mascot in 1912 that the name took hold. This change in name proved to be beneficial, as their rivals Sheffield United also took Wednesday’s former nickname – The Blades.

The oldest club currently (2022) in the Premier League is Aston Villa, who were founded in 1874 by four chapel’s cricket team members who were looking for a way to stay fit during the winter months.

As one of the oldest clubs in the country, Aston Villa were original founding members of the Football League in 1888 and the Premier League in 1992.

In second behind Aston Villa is their Midlands rivals Wolverhampton Wanderers who were founded in 1877. The club has since been given the nickname Wolves but still holds its founding name since 1877.

Everton were founded just one year after Wolves in 1878, whilst current Premier League champions, Manchester City, were formed in 1880.

Watford are the fifth oldest club in the Premier League, having been founded in 1881 as Watford Rovers. The club changed its name officially to Watford Football Club in 1898.