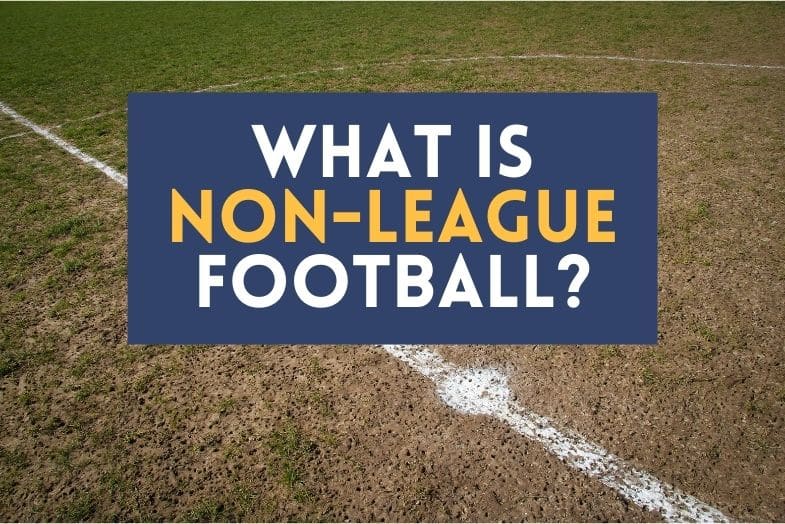 Non-league football often gets an unfair label of being fairly agricultural in comparison to the Premier League. Playstyles might differ between the top and the bottom of the football pyramid but passion runs deep throughout.

Let’s take a closer look at what non-league football means and if non-league players are pros or not.

What is Non-League Football?

In the past, whether clubs paid their players would have been the main difference between league and non-league. Times have now changed but football below the EFL is still generally regarded as non-league.

There are clubs in non-league who helped to found the game as we know it, such as Sheffield FC, who claim to be the world’s first football club. They are an example to some of the biggest clubs that no matter how high they are now, they can fall all the way down through the leagues.

Some other historically big teams now plying their trade in non-league include Grimsby Town, Bury and Notts County. Of course, in England, the Premier League is a level above the football league and is not considered non-league.

What Does ‘Non-League’ Mean?

Non-league means that the teams involved are below the Premier League and EFL structure. However, when considering non-league teams, many people are referring to clubs from the National League, and National League North and South.

Non-league clubs can enter the FA Cup but are not permitted to take part in the EFL Cup or the EFL Trophy. In other countries, non-league refers to teams outside of the top professional divisions.

Is Non-League Football Professional or Semi-Pro?

Mostly, non-league football is semi-professional. This means players also have other work that they do alongside playing the game. Some clubs at the highest level of non-league, known as Step 1, are now fully professional.

Before 1987, clubs had to be elected into the football league (EFL); however, the introduction of direct promotion and relegation from the EFL instigated a change. Some relegated clubs stayed professional in an attempt to win promotion straight back to the EFL.

Other ambitious clubs decided to go professional in the hopes of gaining promotion. However, the risks are great at such a low level and going professional represents higher operating costs. Teams can go bust if they don’t make it to the promised land of the football league.

Which Non-League clubs Are Professional?

Most clubs in the National League are professional. Former EFL teams like Wrexham, Notts County, and Stockport remain professional non-league clubs despite being out of the football league for so long. Many other teams without EFL experience are also professional.

Clubs like Solihull Moors, Eastleigh and Boreham Wood enjoy professional status too. There are also professional fan-owned clubs like Chesterfield FC in non-league. However, at the National League level, it isn’t an even playing field. Some of the division is made up of semi-professional teams like Weymouth FC and Wealdstone.

Teams like AFC Fylde, Boston United, Maidstone United and Ebbsfleet United are all professional despite being far from EFL sides. Thanks to the high levels of support these lower teams enjoy, they can afford to turn professional and give themselves a better shot at the big time.

What Are The Steps in Non-League Football?

The Steps in non-league football refer to which level of the game a given team or teams compete. This starts at Step 1 (The National League), followed by Step 2 (National League North and South), and so on, down to Step 6.

The Steps are important because the structure of non-league football is different to the EFL and Premier League. Below Step 1, the leagues have a pyramid structure; two leagues ‘feed’ into Step 1 from Step 2, with four leagues at Step 3 feeding into Step 2.

Leagues below Step 1 are regionalised, to assist with travelling, etc. With leagues at Step 2 and below almost exclusively semi-professional or amateur, the league structure has to take into account the availability of the players and management, for example in playing midweek matches.

Smaller clubs also don’t have the resources to travel across the country and back once or twice per week. Money is often tight in non-league, so splitting the leagues into regional divisions helps keep things affordable.

How Good Are Non-League Footballers?

History has shown us there are great players in non-league football. Stars like Jamie Vardy, Chris Smalling and Charlie Austin have made it to the Premier League from non-league. Most players aren’t at this standard, but there are plenty of hidden gems in the lower leagues of the football pyramid.

Turning professional as a player is just as risky as turning pro can be for clubs. Some players back themselves to make a living through their football skills while others prefer the guaranteed income of working elsewhere.

Semi-professional non-league players are arguably as good as the professionals but prefer the stability of a full-time career. Playing football alongside this is perhaps a way of having the best of both worlds.

With Step 1 clubs being largely professional, some of the players are of the same standard as those in the fully professional leagues, as you might expect. Players from Step 2 down are usually semi-professional.

Do You Get Paid for Non-League Football?

Players in non-league football do get paid but only up to a point. Professional and semi-professional players enjoy making money from their skills on the pitch. However, the further down the league you go the more likely you are to find amateur players doing it purely for the love of the sport.

Some semi-pro players like earning money through their day jobs and getting a little extra from playing football. Top non-league players can earn upwards of £1,000 per week, while semi-pros can expect to earn half of this.

This pales in comparison when compared to the astronomical wages in the Premier League, which is 3.17 million per year, according to Statista.

Clubs can be secretive about what players are paid. However, it is estimated that professional teams pay at least £500-600 per week and some players can be on considerably more, possibly over £1,000 per week.

Naturally, the lower down the non-league pyramid you go, the less a player is going to earn. Clubs simply cannot afford to pay their players higher wages. This often means players moving around clubs to find a contract that pays them their worth.

Attendances in non-league are usually lower than those in professional football, but there are exceptions. Some teams in the National League are former EFL sides and still enjoy a traditional strong level of support.

Smaller clubs enjoy increased support having gained investment that makes them more attractive to fans, such as fledgling club Hashtag United, founded in 2016. Other clubs reform as fan-owned clubs after the demise of a team at a higher level, attracting supporters of the club they replaced.

Average attendances in the National League can reach over 5,000 per game for the biggest teams.

Let’s take a look at how non-league football stacks up against the biggest and smallest levels of the English football pyramid.

Comparing attendance figures between the Premier League and non-league might seem unfair. However, the statistics show that people all over the country will watch football, no matter the standard. Regular crowds of thousands will turn up to non-league football games.

Non-league teams from the National League, plus NL North and South, enjoy regular crowds in their thousands. Sunday League teams, on the other hand, typically only have a handful of people in the crowd. Often they are family members or friends of players at Sunday League clubs.

As with most sports, the higher the level, the more people are interested in watching. Many people don’t consider watching a bunch of hungover men or women kicking a ball around a muddy park that entertaining.

Whereas, non-league teams have plenty of quality on show and there is a lot to get people off their seats.

According to Transfermarkt’s statistics for the 2021-22 season, the lowest National League average attendance is 939 for Dover Athletic. This figure will vastly outnumber any Sunday League game.