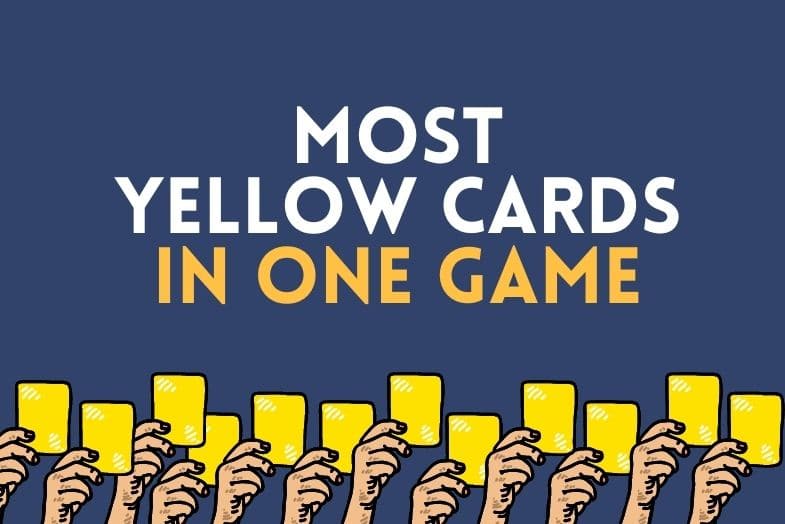 The Premier League is celebrated for its physicality and it has long been considered one of the fastest-paced football competitions in the world. Battle lines are drawn from the moment players cross the white line, and even Premier League managers get booked when their emotions boil over. With tackles flying in from everywhere, let’s see which Premier League games had the most yellow cards.

What is the Most Yellow Cards Issued in a Single Premier League Game?

Leeds United and Chelsea put on a show for the fans, even if they didn’t manage to find the back of the net. This ill-tempered game would see a total of 12 yellow cards, ending in a second booking for Chelsea’s Frank Leboeuf.

Chelsea were in sixth place at the time of the bloody encounter, chasing a place in European competition and taking the lion’s share of yellows with eight. Some of the Premier League’s biggest stars were on the field that day, including the likes of Gianfranco Zola, Marcel Desailly, Harry Kewell and Jimmy Floyd Hasselbaink.

Wolves played Newcastle in an early season encounter that would be remembered for its ill-discipline rather than its quality. Players were committed in their challenges, with 38 fouls in the game.

Wolves edged the contest with seven bookings while Newcastle ended the game with five. Despite the quantity of bookings, both teams kept 11 players on the pitch, ensuring their fines for getting carded were kept to a minimum.

Perhaps the most famous match strewn with yellow cards was the Battle of the Bridge as Tottenham’s Premier League title hopes disappeared. The 2016 match saw a record nine yellow cards dished out to Spurs players as they chased down Leicester City.

History tells us that Spurs failed and Leicester pulled off the impossible thanks to Chelsea’s refusal to be beaten on the day. With the title slipping out of sight, Tottenham’s players managed to stay on the field thanks to the leniency of referee Mark Clattenburg.

Most Yellow Cards in a Football Match [World Record]

Known as the Battle of Nuremberg, Portugal V. The Netherlands at the 2006 World Cup round of 16 produced 16 yellow cards. That is the largest haul of yellow cards in a major competition and it came on the biggest stage of all.

In total there were a record four red cards and 16 yellows shown to the players as Portugal advanced to the quarter-finals of the World Cup. Reasons for some cards dished out include headbutting, time wasting, handball and bad tackles.