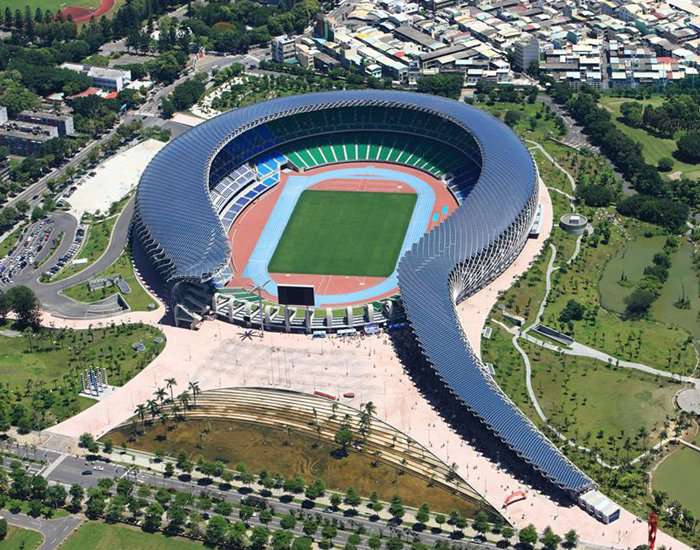 At some point in your football-following life, you will no doubt bemoan the lack of originality about newer grounds.

Some stadiums are less visually stunning than others, of course, but there are still countless architectural works of art in the world of football today. Here are seven of the best:

It might not be the most outlandish creation, but Tottenham’s new ground, opened in March 2019, has set a benchmark for future stadium designs in England.

The second-largest club ground in the country after Old Trafford, its 17,500-seater South Stand exceeds the entire capacity of fellow Premier League club Bournemouth’s ground, the Vitality Stadium, which can only hold little more than 11,000.

And thanks to speedy technology at the stadium bars known as ‘bottoms-up’ technology, about 10,000 pints of beer can be poured per minute.

So often in new stadiums, fans can feel too detached from the match taking place before their eyes. At West Ham’s London Stadium, the furthest distance between the fans and the pitch is an eye-watering 20 metres, for instance. At Tottenham, it’s a mere 7.9m, so the sound and atmosphere from the crowd travels easily.

It may have cost almost £1 billion and may have opened almost a full season late, but it was certainly worth the extra money and wait.

Another club stadium which is the second-biggest in its country, only Borussia Dortmund’s Signal Iduna Park exceeds the capacity of Bayern Munich’s 75,000-seater Allianz Arena.

Bayern’s home since 2005-06, it was designed by Swiss architects Herzog & de Meuron, which used 2874 inflated ETFE plastic panels to give a ‘cloudy’ feel. Meanwhile, its panels allow the colour of the stadium to change to red, blue or white; it was the first stadium in the world with a full colour-changing exterior.

Although this is said to have not gone down well with everyone; authorities have requested that just single colour-schemes be used as it could otherwise distract nearby drivers.

The third and final European stadium on the list is arguably the most unique of all of them; in Braga, northern Portugal.

Initially built for the 2004 European Championships, which saw the host nation finish runners-up, the Estádio Municipal de Braga is built into a cliff, situated on carved-out section of the quarry at Monte Castro; architect Eduardo Souto de Moura said he wanted to fuse ‘the natural and the manmade’ in the design.

Not only that, but the 30,000-seater ground’s scoreboard is mounted on the cliff, too. Its only stands, on other side of the pitch, hold 15,000 each, are joined by steel strings, and can be reached by the 5,000 sqm plaza under the stadium.

Often used by English clubs for friendlies during their pre-season tours of Asia, the ‘Bird’s Nest’ was initially build for Beijing’s 2008 Summer Olympics, holding 80,000.

Like the Allianz, it was both designed by Pritzker Award-Winning architecture firm Herzog & de Meuron, and has the same particularly impressive feature – its exterior.

The outside of the stadium, entirely separate from its internal structure, is made from roughly 42,000 tonnes of steel frame, and is supposedly inspired by Chinese ceramics. Its originality stems from the Olympic Games’ planning committee to represent the rise of China and the country’s heritage.

Not only, that, but it is also apparently designed to be able to withstand a magnitude 8.0 earthquake, although you would suspect that they’d probably rather never find out for sure…

Another national team’s main arena, this enormous 94,000-seater stadium in Soccer City has been home to South Africa since it was built as the centrepiece for the 2010 World Cup.

The stadium’s outer panels are made of a compressed, reinforced concrete with gaps in-between which allow light to pierce through during the night.

The largest ground in Africa, the FNB Stadium is located next to an old gold mine, the source of the Johannesburg’s wealth. It also designed so as to resemble an African pot or gourd; hence its nickname ‘The Calabash’.

Incredibly found almost 12,000 feet above sea level, the Estadio Hernando Siles in La Paz is one of the highest stadiums across the globe.

Holding just more than 40,000 and home to the Bolivian national team, as well as rivals The Strongest and Club Bolivar as well as other lower-league clubs, its altitude caused Lionel Messi to be sick on the pitch during a 1-1 friendly draw there in 2013.

There’s also an age-old rumour that the stadium is haunted, so if you visit it, keep your wits about you, even if your breath may desert you.

Built in 2009, this spiral-shaped stadium, thought to symbolise a dragon, is one of the most unique and original designs around the world.

Perhaps more impressive, though, is that the stadium’s roof consists of about 6,500 aluminium plates, with about 4,500 containing solar panels. It is the first stadium in the world to be significantly powered by the sun.