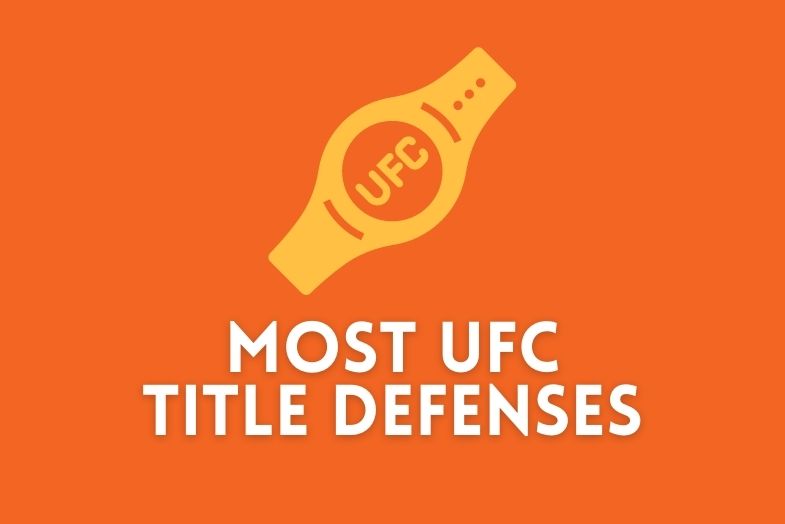 Since it debuted in 1993, the UFC has become synonymous with mixed martial arts (MMA). It is where most of the top fighters in the world ply their trade as they bid to be known as the best of the best.

Thanks to its mixture of fighting styles, there are a lot of challenging matchups, often making it very hard to go on a winning streak. Putting together a series of wins is hard enough as you are rising through the ranks but it only gets harder once you make it to the top.

Fighters are desperate to steal the title belt from the champion, so those at the top of the mountain must fight harder than ever to stay there. With the challenge being so tough, only a handful of UFC champions make successful title defenses. Let’s take a look at which fighters have the most successful UFC title defenses in the organisation’s history.

Which UFC Fighter Has the Most Successful Title Defenses?

The competitive world of mixed martial arts means that winning a title is hard enough. To go on and defend it takes some serious skill and willpower. That said, the UFC fighters with the most successful title defenses are Demetrious Johnson and Jon Jones, both with 11.

With 11 consecutive defenses, it’s easy to see why so many MMA fans considered flyweight Demetrious “Mighty Mouse” Johnson as one of the pound-for-pound greats. Perhaps the only real surprise from Johnson’s career is that anyone was ever able to dethrone him.

Jon Jones also has 11 successful title defenses, however they were not fully consecutive due to time spent away from the UFC for the light heavyweight superstar. Jones’ title defense record is split over an initial eight followed by a further three before he vacated the belt once more.

The longest current UFC title reign belongs to flyweight champion, Valentina Shevchenko, who has successfully defended her belt seven times since claiming her title in December 2018. In the men’s divisions, Alexander Volkanovki (featherweight) has defended his title four times.

With the standard of MMA improving all the time, putting together a run of successful title defenses is proving harder and harder. Fighters like Stipe Miocic, Robert Whittaker, and Joanna Jędrzejczyk find themselves without a title.

Let’s take a closer look at some of the UFC fighters who not only hold their titles but have put together successful defenses.