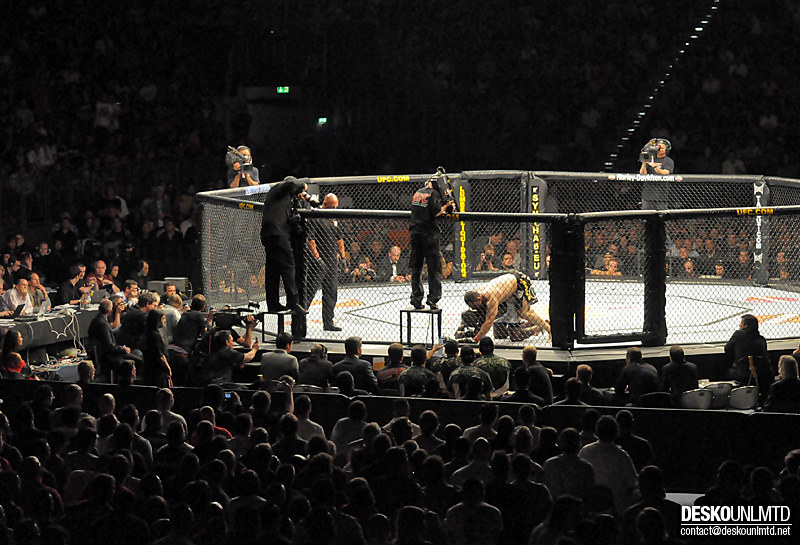 What constitutes a great year for a mixed martial artist? There’s no set schedule, no fixture list, so to an extent they’re left to themselves to plot their own path to glory.

In the Ultimate Fighting Championship (UFC), we usually see the same competitor in the Octagon about three times a year, but often, up-and-coming contenders looking to make their mark on the sport may appear even more frequently.

So, what is the most amount of bouts a UFC fighter has competed in in a year?

NB: By ‘year’, we mean a calendar year starting in January and ending in December, not any 12-month period.

Who’s Had the Most UFC Fights in a Year?

As it happens, there are (at time of writing) nine different UFC fighters tied for the most bouts – five – in a calendar year:

Most UFC Wins in a Year

As you may have figured out from the last section, two of those fighters are also tied on five for the most UFC wins in a single calendar year, in Roger Huerta and Neil Magny.

Huerta was first to set the record on 2007, winning all five of his lightweight bouts that year, including a TKO against newcomer John Halverson after just 19 seconds, a fight with Leonard Garcia which went the full three rounds at UFC 69 and a rear near naked choke to see of Clay Guida in the Fight of the Year.

Indeed, it was his clashes with Halverson and Guida which perhaps proved the most memorable of the five. Against a floored Halverson, Huerta landed a knee to his shoulder, before finishing him off with punches. It appeared initially that Huerta had thrown his knee into the grounded Halverson’s head – an illegal move – but replays showed it was, in fact his shoulder.

Against Guida, Huerta had become increasingly riled by his opponent’s ‘ground and pound’ approach before being punched in the face while trying to get back up. Eventually, having seen it through the third round, Huerta landed to a knee to Guida’s face while trying to kick him, before submitting him via a rear naked choke in the final moments of the fight.

Welterweight Magny managed to equal this feat in 2014, three of which were via a unanimous decision.

The other two – bouts against Rodrigo de Lima and William Macario – came through KO and TKO respectively. Newcomer de Lima spent much of the first round striking and attempting to submit Magny, but to no avail, and in the second, Magny threw enough punches of his own to win via KO.

Magny sealed his fifth win of the year against Macario in October 2014 after forcing him on the floor and pummelling him with punches. And he almost equalled the record again the following year, but defeat to Demian Maia via submission forced him to settle for just the four wins from five in 2015.

Could Anyone Have Six Fights in a Year?

Perhaps the most likely current contender to break the record is Swedish welterweight/middleweight Khamzat Chimaev who, at time of writing, has a perfect record of nine wins from his nine professional bouts in MMA.

The 26-year-old won three fights in the space of nine weeks between mid-July and mid-September in 2020. First, he saw off John Phillips via submission in Abu Dhabi, then Rhys McKee via TKO just ten days later, and in two different weight classes. He then made it a hat-trick by defeating Gerald Meerschaert by KO after a mere 17 seconds in Las Vegas eight weeks on.

He’s already smashed one record in 2020 for the quickest turnaround between UFC wins in that ten-day period in July. If ‘Borz’ can manage that workload in that short space of time, don’t be surprised if he goes after Huerta and Magny’s crown in 2021.