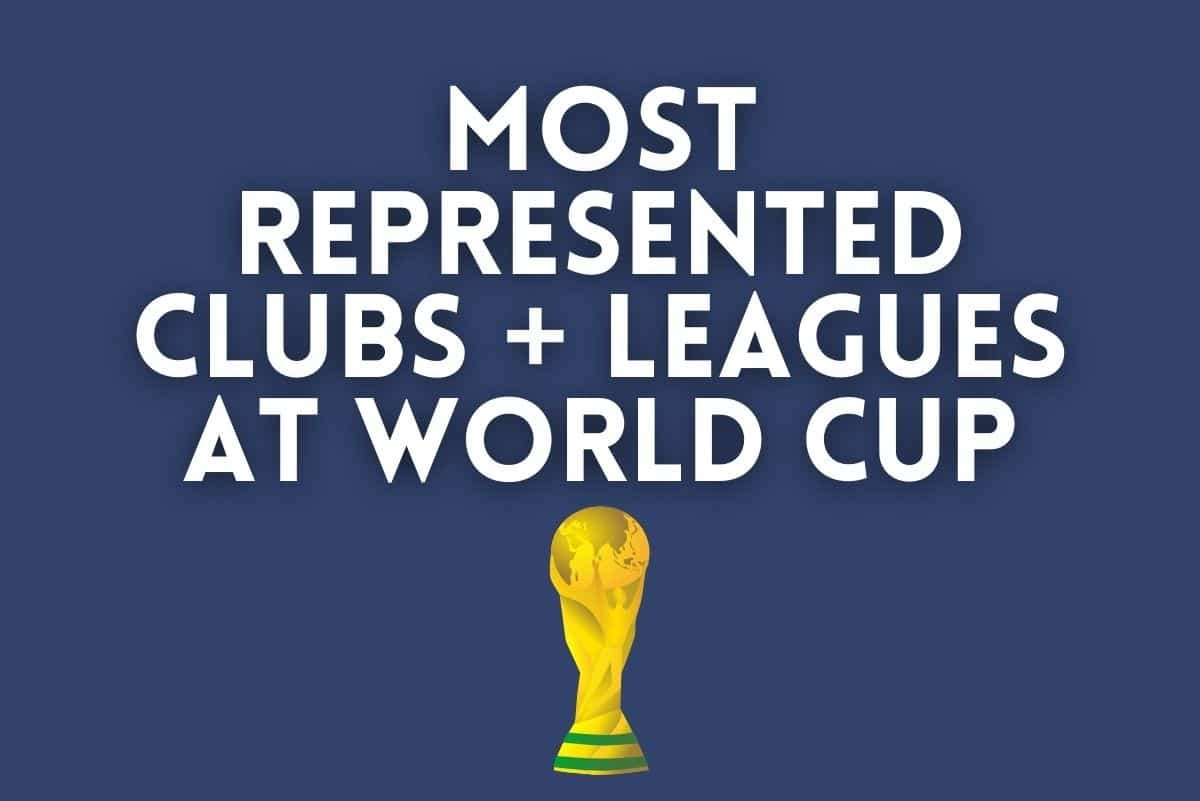 The World Cup is undoubtedly the biggest sporting attraction for the casual football fan. But for the die-hard supporter, his allegiance mainly lies with the club he adores. After all, it’s the clubs that keep us entertained for the vast majority of the season, year in year out.

So even during the big event in Qatar, club supporters will be closely following their heroes, regardless of the nation they represent, hoping to see one of their own lifting the legendary golden trophy.

But which club has the biggest number or representatives in the 2022 World Cup? And which league has the most stars on the plane to Doha?

Time to reveal the answers.

Most Represented Clubs at 2022 World Cup

As one would expect, the list is predominated by European giants. Barcelona leads the host with 17 players at the World Cup, with one extra man separating them from Bayern Munich and Manchester City who complete the podium.

When the squads were first announced, it was the Bavarians leading the way with 17 players, but Sadio Mané eventually pulled out due to injury, while late Spain addition Alejandro Balde tipping the scale in the Catalans’ favor.

Even with Erling Halaand’s Norway missing out on the big carnival, Man City still boast a hefty number of representatives. Naturally, the Cityzens will have their own block within England, consisting of Phil Foden, Jack Grealish, Kyle Walker, John Stones and Kalvin Phillips. Nonetheless, their Bona Fide leader Kevin De Bruyne will be leading the charge for Belgium. Moreover, Rodri and Aymeric Laporte will take on their club teammate Ilkay Gundogan when Spain and Germany collide at Al Bayt Stadium.

As for Bayern, they will have the largest block within the German national team, including captain Manuel Neuer, the legendary Thomas Müller and five others. The Bundesliga giants also have four players featuring for defending champions France. These are Lucas Hernandez, Benjamin Pavard, Kingsley Coman and Dayot Upamecano.

The biggest surprise on the list is Qatari club Al-Sadd who have 15 players in the tournament. The host nation will heavily rely on the Al Zaeem, with a gigantic block of 13 players (that’s half of the 26-man squad).

Most Represented Leagues at 2022 World Cup

Expectedly, the most five represented leagues at the 2022 World Cup are the Premier League, LaLiga, Bundesliga, Serie A and Ligue 1, collectively known are the Top five European leagues.

With 134 representatives, the Premier League is head and shoulders above its competitors when it comes to the number of player called up for the 2022 World Cup.

As the richest and most followed domestic league in the world, EPL is undoubtedly the envy of the rest of the world, and this figure comes as an additional confirmation for the league’s position on top of the echelon.

LaLiga is represented by 84 players in the 2022 World Cup, putting the Spanish first division in the runner-up spot behind the Premier League.

Real Madrid, Barcelona, Atletico and Sevilla constitute the largest host with 60 players in between them.

77 Bundesliga players are taking part in the 2022 World Cup. The German league completes the podium alongside the Premier League and LaLiga.

Number of Serie A Players in 2022 World Cup

The Serie A lands in fourth place with 65 players called up for the 2022 World Cup. The Italian first division is the only league that appears in the Top 10 without being represented by the country’s national team in Qatar.

Had the Azzurri reached the finals, it would have surely boosted the league’s number of representatives, most probably landing Serie A in second place.

The French Ligue 1 has 55 representatives in the 2022 World Cup, placing it in fifth position behind the rest of the Top Five European leagues.

Interestingly, only six Ligue 1 players feature in the defending champions’ squad, with the vast majority of the French national playing their football abroad. However, the league is well represented in other squads, especially African nations like Morocco and Cameroon.

Which Club Has the Most Players at 2022 World Cup?

With 17 stars, Barcelona is the club with the biggest number of players in 2022 World Cup. The Catalans will provide the biggest block for the Spanish national team. Their seven ambassadors include club captain Sergio Busquets and wonderkids Pedri and Gavi.

For their part, Robert Lewandowski and Frenkie de Jong will represent Poland and the Netherlands respectively, while Jules Koundé and Ousmane Dembelé will feature for the defending champions France.