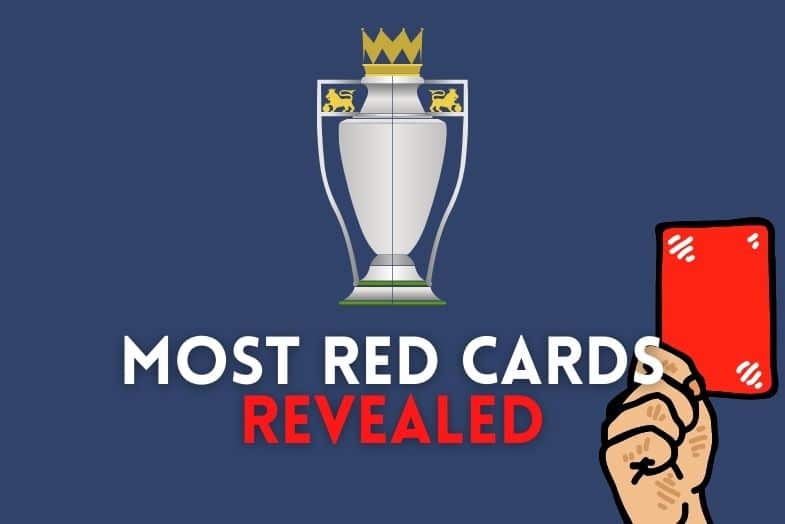 Most footballers come with a certain reputation. Some will be known for being law-abiding do-gooders, others garner a reputation for diving, but plenty more become synonymous with receiving cards, namely of the red variety.

We’ll explore all of this and more below…

Who Has the Most Red Cards in Premier League History?

Three players share the accolde of having the most red cards in Premier League history: Richard Dunne, Duncan Ferguson and Patrick Vieira – each of whom got eight Premier League cards in their careers.

Indeed, you won’t be too surprised by the list of the top seven players with most red cards:

Players with Most Red Cards in Premier League

Which Team Has the Most Red Cards in Premier League History?

Everton currently hold the record for the most Premier League red cards (104), after Jarrad Branthwaite and Salomon Rondon were sent off for the Blues at home to Brentford on 15th May 2022. Arsenal are just one behind with 102 red cards.

Unsurprisingly, the top two teams for red cards have been ever-presents in the Premier League, but there’s still a fair distance between Arsenal and Everton and the rest of the most ill-disciplined clubs the Premier League has ever seen:

Most Red Cards in Premier League By Team

Most Red Cards in Premier League Season (by Team)

Although, to be fair, QPR had Joey Barton playing for them the year they managed it, and Sunderland had Lee Cattermole in their nine-reds season, so perhaps not the biggest surprise.

Most Red Cards in Premier League Season (by Player)

The most red cards a Premier League game has seen is three; an accolade shared by 17 matches. They are: