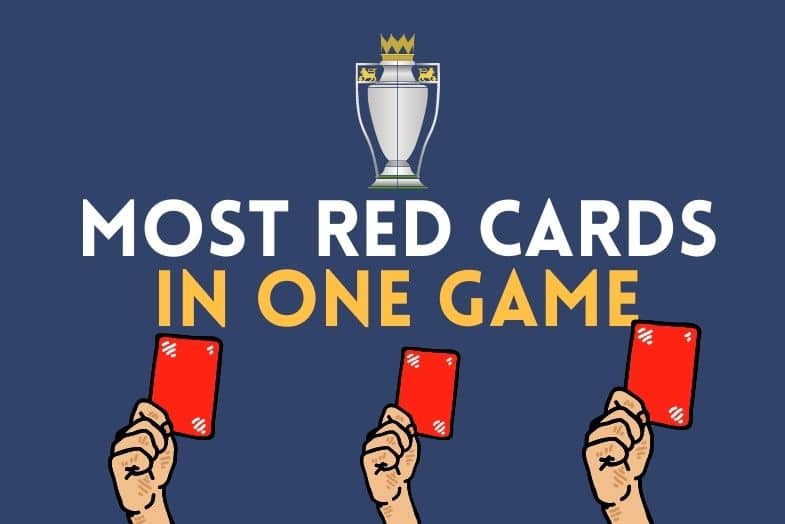 Whether we love it or hate it, bookings are part of the game. A second booking or a straight sending-off can have huge impacts on the direction of a match. When a team goes down a man, their opponents are invigorated with new confidence to attack.

While not impacting the pitch as much, managers themselves can fall victim to bookings. To make things worse, red cards not only affect the current match but can cause players to miss additional matches. The players themselves will also be fined, albeit, at fees that are chump change for the top earners.

What is the Most Players Sent Off in a Premier League Game?

The most players sent off in a Premier League Match is three. This number of sending offs has happened more than a dozen times. Some instances have been the result of 3 straight reds while most have been a combination of reds and multiple yellows.

Here are the five most recent matches with three sending-offs:

Southampton found themselves down after just 6 minutes of play. Shortly after falling 0-2, S’oton’s Gaston Ramirez and West Brom’s Marc-Antoine Fortune were sent off at 70 minutes right before Romelu Lukaku would double the baggies lead.

Shane Long would make it 3-0 with a low strike in the 77th minute.  Southampton would lose all hope when Danny Fox was sent off for a reckless two-footed lunge.

Portsmouth found themselves down to ten men and down a goal quite early in this one. At the 12 minute mark, Ricardo Rocha was given a red for tripping Darren Bent in the penalty area. The striker coolly converted from the spot.

Things would get interesting as Sunderland’s Lee Cattermole was sent off for a second yellow at the 53rd minute. David Myler would see red, tying the record for most red cards in league history, with only three minutes remaining.

In the last gasps of extra time, Aruna Dindane equalised for Pompey with a 96-minute strike.

Up 1-0, City was firmly in control until Gelson Fernandes was sent off with a second yellow in the 25th minute. Spurs would take advantage quickly with Luka Modric putting Darren Bent through for the equaliser.

The striker would score the match-winner before City’s Richard Dunne and Tottenham’s Benoit Assou-Ekotto were sent off in the final ten minutes.

Has a Premier League Match Ever Been Abandoned Due to Red Cards?

Games have been abandoned due to things like the weather, fan protests, pandemics and other world events.

Most Red Cards in a Football Match [World Record]

The world record for most red cards in a football match comes from none other than the Argentinian fifth division. In Buenos Aires in 2011, local rivals Claypole and Victoriano Arenas turned a nasty affair into a bench emptying free-for-all. According to the match report, the referee sent all 22 players off!