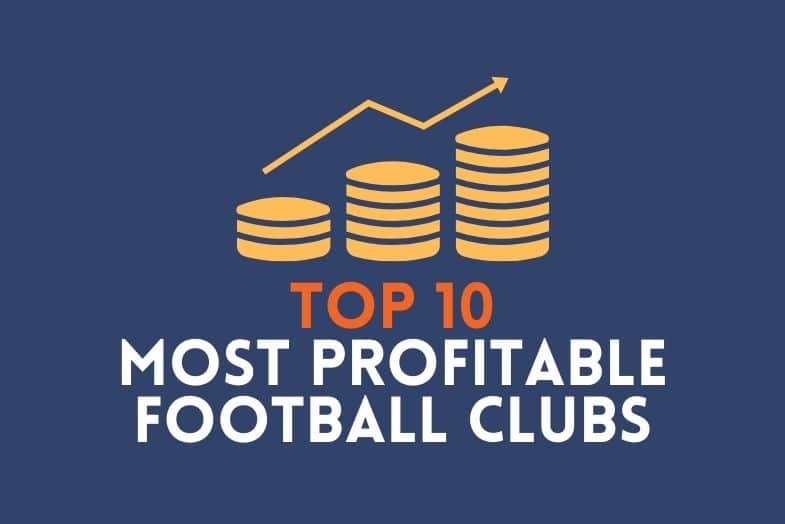 We live in a time where multi-million pound transfers and eye-watering high wages have become normal in modern football. However, it is these same incredible feats that have instigated the downfall of some of the greatest football clubs in European history.

Although many top European clubs have found themselves in substantial debt during the past few years, several teams have managed to stay profitable whilst competing in the most prestigious leagues across the globe.

Why Are Football Clubs in Debt?

Many football clubs are in debt as they spend more than they make. The COVID-19 crisis has certainly played a key factor over the past two years, with UEFA reporting an estimated 7.2 billion euros loss in revenue between football clubs in Europe from 2019-2021.

Covid prevented supporters from attending live games, severely halting the club’s revenue streams. Barcelona reportedly earned a staggering €300 million per season from ticket and merchandise sales, therefore a large portion of that income was lost due to covid.

Poor player transfer decisions and a decrease in revenue have led to many falling into debt, with Barcelona in particular owing up to 1.35 billion euros.

Despite this loss over the past two years, club spending has continued to grow with over £1 billion being spent by Premier League clubs alone in the 2020 transfer windows.

Top European clubs have continued to increase their spending whilst losing revenue, a strategy that was unsustainable over the last few years.

Clubs like French giants PSG and Premier League champions Manchester City have succeeded over the past decade thanks to world-record spending. PSG still hold the record for purchasing the top two most expensive players in the world, Neymar for €222 million and Kylian Mbappe for  €145 million.

With all this high-level spending it is easy to understand why PSG, one of the wealthiest clubs in the world, announced a debt of €70 million at the end of 2020. However, not every club has fallen into this pit of financial difficulties thanks to smart transfer decisions and committed investments from owners.

Do Any Football Clubs Make a Profit?

In European football, only 10 teams recorded a profit of £1 million or more during the period from 2019 to 2021. With over 1000 professional clubs in Europe, this means that less than 1% were significantly profitable.

Chelsea, Liverpool, Newcastle and Norwich were the only Premier League clubs able to profit; Aston Villa and Burnley broke even despite the drop in revenue thanks to player sales and injections of cash from their owners.

Although the Dutch Eredivisie does not generate as much commercial and broadcasting revenue for its clubs compared to the top five European leagues, Ajax and AZ Alkmaar are remarkably still in the top ten for most profitable sides in Europe.

European competitions such as the Europa League and Champions League have benefited many sides financially. SportingNews reported that all 32 clubs that reach the group stage of the Champions League receive a share of the £2.44 billion generated from the competition’s revenue.

Clubs such as Napoli, Villarreal and Atalanta have been able to develop greatly from this added income as they have also remained profitable over the past few years.

From the top ten clubs that receive the highest amount of overall revenue, only Chelsea and Liverpool have remained profitable since 2019.

Chelsea reported an impressive profit margin of £33 million at the end of 2020 after a net sum of £93.7 million was invested in the squad.

Despite seeing a loss in broadcasting, matchday and commercial revenue, the London club has been able to rise as the most profitable club in the top European leagues.

Closely behind the 2021 Champions League winners is Serie A outfit Napoli. The Italian club boasted an impressive profit margin of 30 million euros due to their player sales and additional European competition income.

Premier League side Liverpool follow closely, with the club’s profit margin rising to £29 million and their overall revenue to a staggering £814 million despite the deductions caused by covid.

This profit was propelled by the eight new partnerships announced since the beginning of the virus, whilst Nivea and Carlsberg renewed their existing long-term deals with the club.

Commercial selling has always been an effective tool for increasing profit margins at football clubs with sponsorship and merchandise income largely making up net profit margins.

It is estimated that Manchester United sell an average of 1.7 million football kits yearly, generating an incredible revenue stream roughly around £80-90 million per year.

The most recent example of high-volume merchandise selling would be that of PSG, as they were able to make  €23.7 million through online sales of Lionel Messi’s club shirt on the first day. Due to the player’s status and the use of online retail, the club sold 150,000 tops in the first seven minutes of its release.

Although Europe’s top football clubs have been able to generate billions in revenue in modern football, their method of overspending on player transfers, whilst losing revenue during the COVID-19 pandemic, has left many struggling with financial debt.

Russian billionaire Roman Abramovich has been able to help Chelsea remain profitable with his injections of cash into the playing squad, making the Blues one of the most profitable clubs in the world.

Despite the loss in revenue for many clubs, teams such as Norwich, Villarreal and Ajax have been able to sell their top players to help make them profitable whilst attempting to sign cheaper replacements for the future.

With the world beginning to galvanise after the chaos of covid, top European clubs will likely continue to spend big as matchday and commercial revenue will return to help maximise their profit margins.