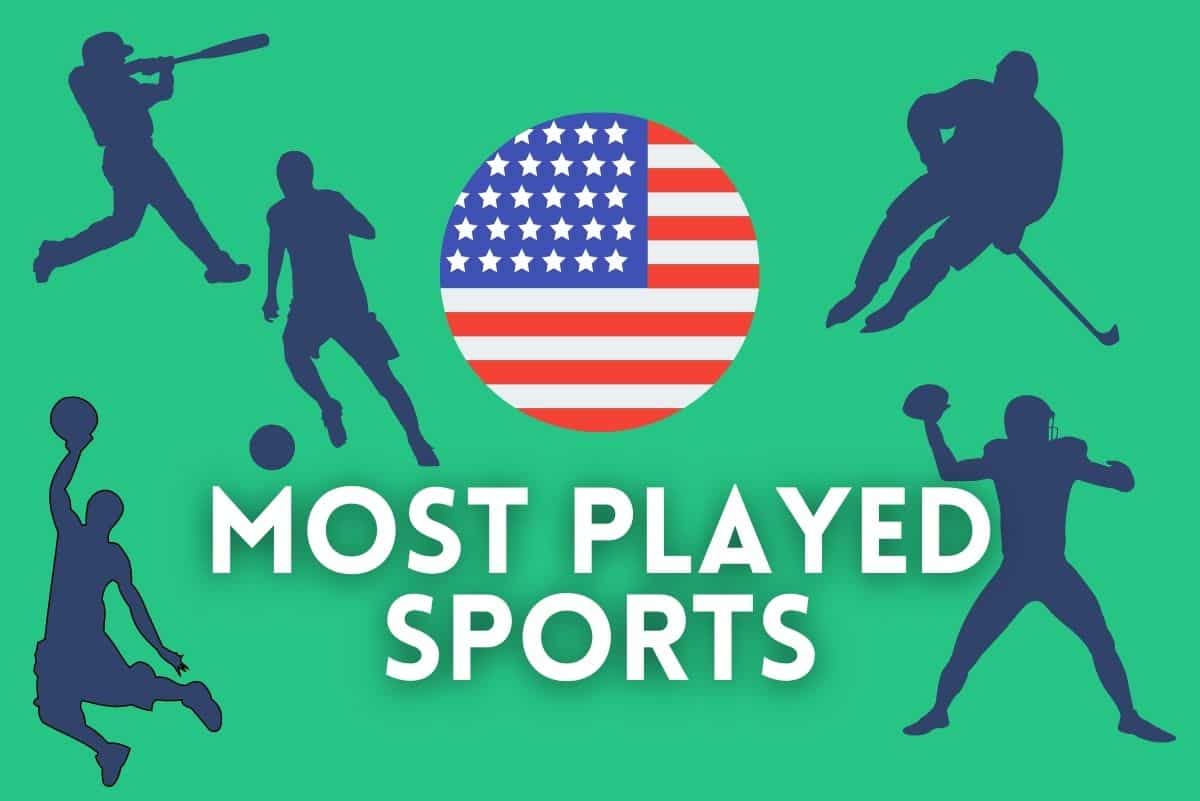 America has always been a melting pot of culture and ideas that breeds innovation. This idea of US ingenuity is no more true than when it comes to the world of sports.

Many popular sports in America are inspired by those that came before them. Others may be from places like Canada and Europe but have truly grown into their American own. Even sports like cricket and rugby as gaining popularity across the pond.

What is America’s National Sport?

Historically, baseball has been known as America’s favourite pastime. More recently, American football has eclipsed the old favourite to become the national sport.

A recent Gallup poll has found that American football rates as the most popular ‘favourite sport’, garnering 37% of the respondent’s top choices. Basketball (11%), baseball (9%), association football (7%), and hockey (4%) rounded out the top five.

Most Played Sports in USA [RANKED]

Basketball was invented in 1891 at a school gym in Springfield, Massachusetts by James Naismith–the game was originally played with a football!

Despite being well over one hundred years old, it took a long while for the sport to catch on and gain national appeal. By the 1950s, the NBA had established itself as a legitimate sports league. Basketball has since become a fully international affair with FIBA basketball tournaments regularly played across the globe.

Football has long been referred to as ‘soccer’ by our cousins across the pond. Mainly, this helps avoid confusing the discussion of the sport with American football, which they simply call ‘football’.

For nearly a century, Americans resisted the pull of association football (unlike most of the world); however, the sport has always had many active participants. Many people play as children well into their teens.

In more recent decades, football has been rising in popularity–this is largely due to the success of the US Women’s National Team and the MLS.

Baseball is one of the first truly American sports inventions. Both baseball and its slower variant softball have been played all over the country for well over a century. And for a long time, watching professional baseball was not only America’s favourite, but it was also the most played sport in the nation.

Today, the MLB is still recovering from damage done during baseball strikes in the 90s. The league is still propped up by a six-tier ‘minor league’ full of ‘farm teams’ that can be found playing in cities, small towns, and countries across the country.

As the most popular spectator sport in America, it may be surprising to find American football so far down this list. After all, the NFL is one of the most-watched leagues on TV.

According to a recent study, football does have the most active participants at high school and college levels. This is mostly because American football teams can feature upwards of 60-plus first-team players.

One reason participation levels are much lower for football is that the sport is missing out on half the population. Only a tiny minority of American women play the sport.

In the US, ice hockey is simply referred to as ‘hockey’. Hockey was developed in Montreal, Quebec in Canada with the first game played in 1875. Originally played on frozen ponds, the first modern game would be played in the US in an artificial ice rink in 1883.

Today hockey is a sport that has regional popularity mostly based in the northern parts of the US; However, more recently, the southern ‘Sun Belt’ states are gravitating toward the game. Despite this, ice hockey remains much of an outsider when compared to the other ‘big five’ sports in America.

Most Popular Sport in America

With the increase in popularity of sports like basketball and soccer, one can only wonder what will be the most popular sport in the future.