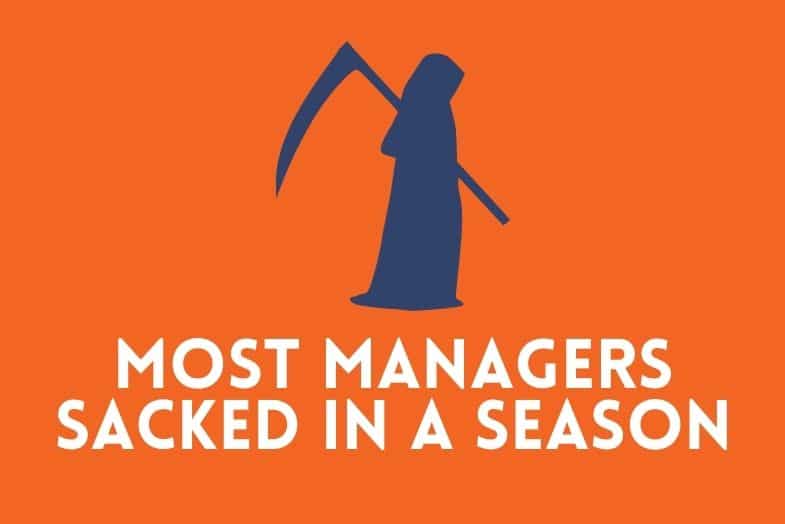 Premier League managers are under great pressure to perform from the first game of the season. If the owners of these super-rich clubs sense that things are starting to turn sour a manager has to watch their back.

There is so much at stake for clubs at both ends of the table, so managers enter their contracts knowing their head is already on the chopping block. Unfortunately, many managerial heads do roll in the Premier League and there has never been a season where all managers have kept their jobs.

Positions become untenable for various reasons; playstyle, results, personality. How well, and how quickly, a manager responds to things going against them on the pitch is the difference between keeping their job and not. Let’s take a look at which seasons have seen the most managers get sacked in the Premier League.

Most Premier League Sackings in a Season

With so much at stake to stay in the most lucrative football league in the world, Premier League owners often get itchy trigger fingers.

Staying means so much to teams financially that they will do whatever it takes to remain in the promised land. Successful teams aren’t immune to sacking their managers either, with the added lure of European football a must for certain clubs.

If they look like missing out on the Champions League or other European slots, owners of the ‘big six’ teams are also quick to change things up.

The 2017/18 Premier League season saw 10 managerial changes with plenty of surprises along the way. Frank de Boer suffered the ignominy of being the first manager of the season to get the boot, just a few short weeks after the curtain was raised.

It was a terrible tenure and Palace didn’t even manage a goal in the league under de Boer before the Dutch coach was given his marching orders. He was replaced by Roy Hodgson who did a tremendous job for Palace before leaving his post in 2021.

Leicester City also proved that there is no room for sentimentality in football after parting ways with Craig Shakespeare shortly into the season. Shakespeare had guided Leicester to safety the previous season following a disastrous defence of their legendary title win.

However, with relegation looking possible after a handful of matchweeks, Leicester turned to Claude Puel to steer the ship. Puel did manage to lift Leicester to eighth in the table, even if his brand of football wasn’t universally loved on the terraces at the King Power Stadium.

Some teams try to roll the dice and get themselves out of trouble with a managerial change but it backfired for West Brom. When they sacked Tony Pulis they were in 17th but after replacing him with Alan Pardew, and subsequently sacking him too, the Baggies finished rock bottom. Stoke City and Swansea City also tried to pull off the great escape with a mid-season managerial change but fell short.

Perhaps the most surprising exit was Marco Silva from Watford who had the Hornets in 10th when he left his position. Watford ended up in a lower place in the table than they were in when Silva was relieved of his duties.

The Sunderland manager’s position can’t have been much fun for many of the men who took up the role. Paolo Di Canio stepped into the firing line and was also the first to get sacked in the 2013/14 season. He had Sunderland dwelling at the foot of the table but fortunately, his replacement, Gustavo Poyet, led them to a safe 14th position.

The 2013/14 season saw the emergence of a cult figure, ‘Tactics Tim’ who rejuvenated a lifeless Tottenham Hotspur when he took over from Andre Villas-Boas. Sherwood guided Tottenham back into the European places at the expense of Manchester United.

David Moyes had the impossible job of following Sir Alex Ferguson at Manchester United. It was an uninspiring first season in charge that ultimately saw Moyes given his marching orders weeks before the season’s end.

Perhaps the most improved team following a managerial change was Crystal Palace. The south London club rose from a lowly 19th when Ian Holloway was sacked to a comfortable 11th under new manager Tony Pulis.

Cardiff City will perhaps feel like they made the worst managerial decision when they went from 16th under Malkay Mackay to 20th with Ole Gunnar Solskjaer. Norwich City also sacked a manager keeping them out of the relegation places in Chris Hughton, only to drop out of the league under the new man (Neil Adams).

Alan Curbishley had built a great reputation as a manager following his success with Charlton Athletic in the Premier League. His stint in charge of West Ham United wasn’t as successful and he became the first managerial casualty of the 2008/09 season.

Curbishley was sacked at the beginning of September, which is a matter of weeks before the season kicks off. He wasn’t the only early Premier League sacking that season and Kevin Keegan’s return to Newcastle ended just one day later.

Both Portsmouth and Sunderland changed managers twice during the season but they may not agree on whether their seasons were successful or not. Portsmouth were punching for Europe under Harry Redknapp before replacing him with Tony Adams and finishing mid-table. Sunderland, on the other hand, had been fighting against relegation under Roy Keane and Ricky Sbragia’s reward for keeping them up was a final day sacking.

At the top of the table, Luis Felipe Scolari had Chelsea in 4th place which wasn’t enough to stay in charge at Stamford Bridge. Scolari was replaced by the go-to season saver for many teams, Guus Hiddink, who improved Chelsea’s league position to 3rd.

In the Premier League, the ‘sack race’ has gotten tougher and tougher each year. The early days of the competition generally saw Premier League owners give their managers time and support. However, the more money entering the league through sponsorships means the stakes are higher.

Today, faltering Premier League managers are often dispatched without much thought. The trend for sacking, rather than backing, managers is rising.

Of the teams that have been in the Premier League since its inception in 1992, Arsenal has had the fewest managerial changes with four.