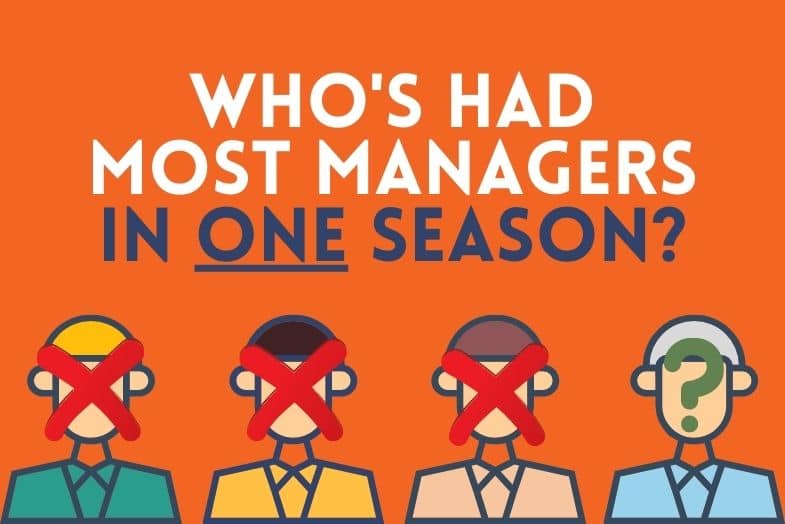 Football management is a cut-throat business. Where arguably the best British manager of all time, Sir Alex Ferguson, was given several years to get things right at Manchester United in the late 1980s, managers today are rarely trusted for more than a handful of games to put things right when the waters of professional football get choppy.

But regularly changing managers and head coaches rarely has the desired effect for struggling clubs – although this hasn’t stopped many of them trying more than once a season to make that inspired managerial appointment.

Let’s have a look at some of the clubs that have rolled the dice and made the most managerial changes during the course of a season.

Which Premier League Club Has Had the Most Managers in a Season?

Several Premier League clubs have had four different managers in charge in a single season, including Newcastle, Derby County, West Bromwich Albion and Watford, who were all relegated in the season in question.

Spurs, Portsmouth and Swansea have survived in the Premier League with four different managers in charge during the course of a season.

Newcastle United had a disastrous season in 2008-09 that ended in relegation from the Premier League and saw four different managers take charge of the team – Kevin Keegan, Chris Hughton (twice), Joe Kinnear and Alan Shearer.

Keegan was in charge when the season began but left in early September amid reports of disagreements with the club’s board.

Hughton was placed in temporary charge until Kinnear was appointed in late September. However, medical issues saw Kinnear leave the club in February, with Hughton reappointed as manager.

With results on the pitch not improving and the club facing relegation for the first time in 17 seasons, they called for club legend and Premier League all-time top scorer Shearer to bail them out of trouble.

But Shearer, who had a stellar playing career but no previous managerial experience, failed to pull off a miraculous escape, and Newcastle were relegated to the Championship.

Derby began the 2001-02 season with legendary manager Jim Smith in charge, but by October his services were no longer required.

He was replaced by his assistant Colin Todd, but with results not improving he lasted only 98 days before Colin McEwan took over as caretaker manager. John Gregory was then appointed as permanent manager, but one win from their final eight games saw Derby relegated to the-then First Division.

Like Derby before them, West Brom began the 2017-18 season with a highly respected manager in charge in Tony Pulis. However, after a run of poor results Pulis left the club in November and was replaced by Gary Megson as caretaker and then Alan Pardew as the club’s new boss.

However, Pardew couldn’t turn the Albion’s fortunes around and left in April, with the season seen out with Darren Moore at the helm. The Baggies finished bottom of the league after only registering six wins all season.

Watford have become synonymous with the quick-fire changing of managers in recent years under the stewardship of Italian businessman Gino Pozzo. And while Javi Gracia had the reins when the 2019-20 season began, Quique Sanchez Flores was appointed as his replacement in September.

However, he only lasted until December, when Nigel Pearson became Watford’s third manager of the Covid-disrupted season. Pearson himself was sacked with two games remaining and the club three points above the relegation zone.

But under interim manager Hayden Mullins, Watford lost their last two games and were relegated to the Championship.

It seems like chopping and changing the managerial team mid-season is a recipe for disaster – or in this case, relegation – in football. But that’s not always the case.

Which Football Club Has Had the Most Managers in a Season?

Italian side Palermo has the dubious honour of having the most managers in a season, with a scarcely believable nine managerial changes involving seven different managers during the 2015-16 Serie A season.

They began the 2015-16 season with the experienced Giuseppe Iachini in charge, but after six defeats in the first twelves games he was replaced by Davide Ballardini, who lasted seven games.

Caretaker boss Fabio Viviani lost his only match in charge 4-0 to Genoa before Argentine Guillermo Schelotto arrived. He actually oversaw a 4-1 win against Udinese before it emerged that he did not have the proper coaching qualifications to manage in Serie A.

In came Giovanni Tedesco, who lasted three games before moving to Boca Juniors, and his replacement Giovanni Bosi lost to Torino 3-1, leading to Iachini – the manager who’d started the season – being reinstalled.

Iachini lost two and drew one before being sacked again, and in came Walter Novellino, who lost three and drew one. He was sacked and Davide Ballardini returned for a second spell in charge.

Ballardini remarkably managed to keep Palermo in Serie A with three wins and two draws from the final six matches of the season.