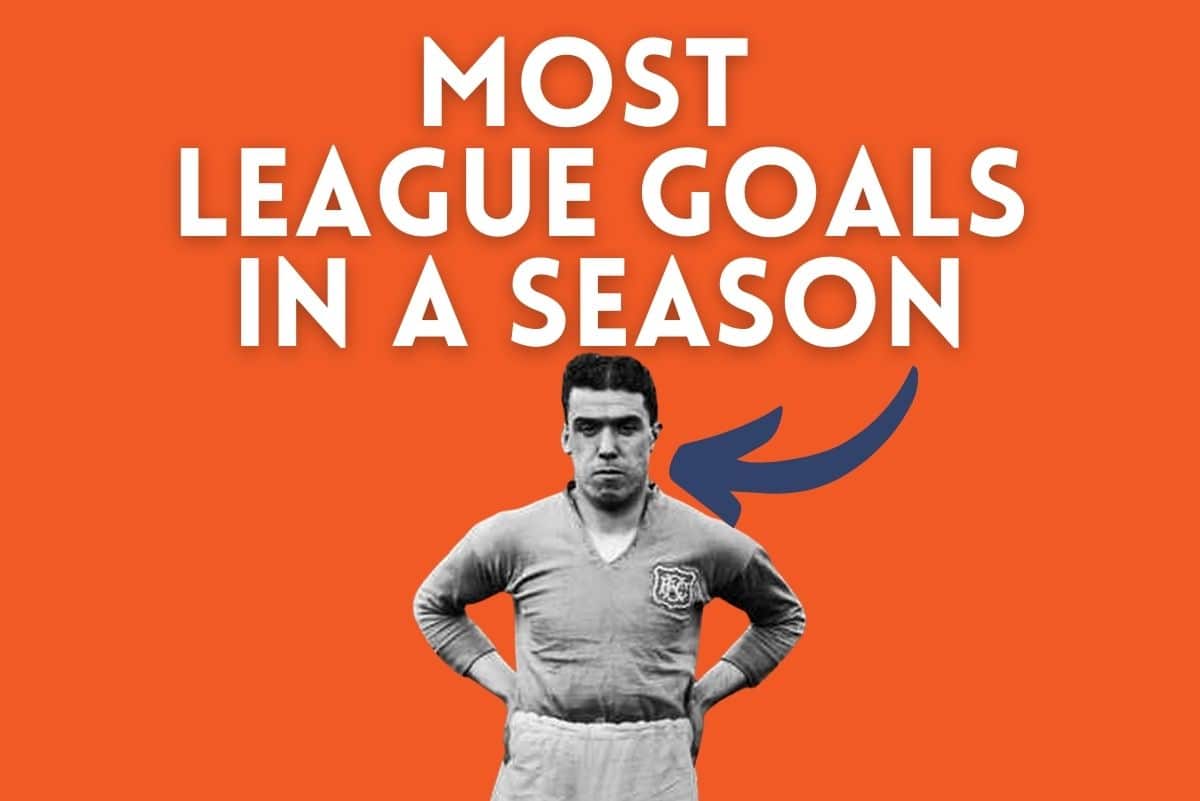 Goals – they are the reason we all watch football, surely? There is nothing better than watching your team hit the back of the net, and nobody is more loved by the fans than the players who regularly get on the scoresheet.

There are many legendary goalscorers in football history, and most fans know about the scoring exploits of the likes of Pelé (732 goals), and in the modern game Cristiano Ronaldo (817 goals and counting).

But who has the best goalscoring record in a league season? In a limited amount of league games, how many goals are actually possible?

Let’s have a closer look.

Most League Goals in a Season

Dean was undoubtedly one of the greatest players and goalscorers of his generation, and his exploits of the 1927/28 league season may never be bettered.

Only 21 years old at the time, Dean netted a hat-trick on the final day of the season to reach the staggering 60-goal tally, and went on to score a total of 349 goals in 399 appearances.

Fittingly, there is a statue of Dean outside Everton’s home ground Goodison Park.

Of course Lionel Messi is on this list. During a majestic 2011/12 season the Argentinian missed only one La Liga game and found the net an amazing 50 times, despite it being announced that head coach Pep Guardiola would be leaving at the end of the season.

He scored four goals against local rivals Espanyol in the penultimate game of the season to hit the 50-goal mark, smashing the previous Spanish record of 34 league goals, set by Ronaldo in 1996/97.

And if Messi is on this list, Cristiano Ronaldo has to be as well. Three years after Messi harvested 50 La Liga goals in a season, Ronaldo came close to bettering that record with 48 goals from his 35 league appearances.

As well as the goals, Ronaldo also provided 17 assists, and in all competitions that season netted an astonishing 61 goals.

It’s that man Ronaldo again. While Messi was busy finding the net 50 times in La Liga in 2011/12 for Barcelona, Cristiano scored 46 times for their great rivals Real Madrid.

His phenomenal goalscoring streak, which included 12 goals from the penalty spot, helped Real Madrid to the league title.

Messi and Ronaldo’s combined total of 96 goals is the most ever by two players in one of Europe’s top five leagues.

There is a theme developing in this list, as we return to La Liga and to arguably the greatest player of all time, Lionel Messi.

A season after netting 50 times in the league campaign, Messi notched up 46 goals from only 32 games to lead Barcelona to their 22nd La Liga title, scoring a goal on average every 52 minutes of play.

Most Premier League Goals in a Season by One Player

Mohamed Salah holds the record for most goals in a 38-game Premier League season after he netted 32 times for Liverpool in the 2017/18 season, his first season at Anfield.

After scoring on his debut at Watford on the opening weekend, he never went more than two league games without scoring, and only missed two of Liverpool’s 38 Premier League games. Having missed a penalty against Huddersfield earlier in the season, Salah set the new record with a goal in a 4-0 win over Brighton on the last day of the season.

Players Who Scored 30+ Goals in a Premier League Season