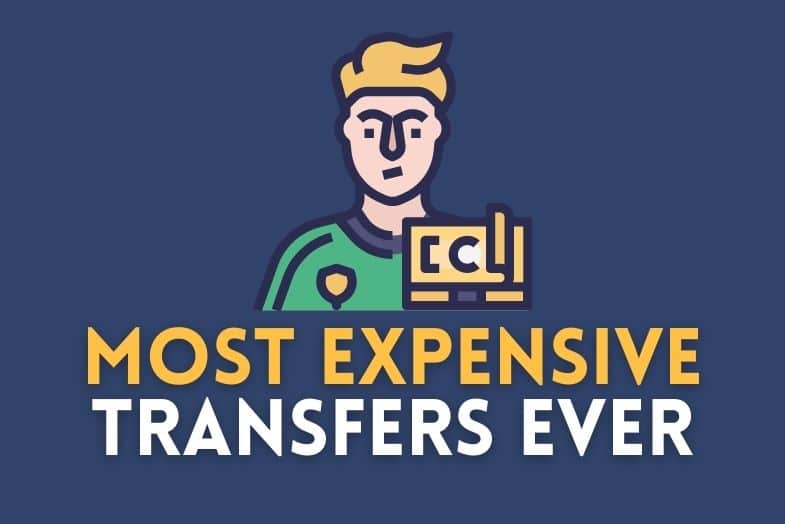 Football transfer fees have been on an upward trajectory, and they continue to skyrocket. That lies mainly with the affluent owners who can readily provide the funds to lure the best players in the world to their club.

While the Premier League remains a huge pull for stars to make their mark, many of the top leagues on the continent are deluged with talent.

This trend towards expensive outlays hasn’t happened overnight, but it has been eye-watering nevertheless. So, as we gear up for another busy summer transfer window, let’s reminisce on six of the biggest transfers in football history.

We have ranked the transfer fees in order and there will be a few familiar faces that feature as you might expect.

At the time, there had been a lot of wrangling over Neymar’s future at Barcelona, however, he decided to take the plunge and move to French giants PSG.

The Brazilian forward shattered the previous world transfer record which stood at £89m and it was a ground-breaking deal for both club and player.

To a certain extent, Neymar’s move reshaped attitudes towards the transfer market, but his extraordinary fee has yet to be broken.

Kylian Mbappe had been on PSG’s for a while and after landing the World Cup in 2018 with France, the club’s Qatari owners made their play and swooped in for him.

Mbappe became the most expensive teenager in the process and the package included a one-year loan spell before the deal became permanent. He is tearing things up in Ligue 1.

Joao Felix remains the third costliest transfer in history, even though Philippe Coutinho and Ousmane Dembele – who are included on this list – cost more due to their add-ons.

Anyway, Felix was a rather unknown quantity before Atletico Madrid prised him from Benfica for £112.9m. However, it’s fair to say that Felix has been arguably one of the La Liga outfit’s most consistent performers over the past few years and he has repaid their faith in him.

Antoine Griezmann had been at the centre of a long-running transfer saga, but as they normally do, Barcelona got their way and the Frenchman’s buyout clause was met.

However, Griezmann’s spell at the Nou Camp was a rather unhappy one, and after two years, he returned to Atletico.

Philippe Coutinho was outstanding during his time at Liverpool before Barcelona plucked him. However, it proved to be a glaring error on Barca’s part as Coutinho struggled during his time in Catalunya and the Spanish giants found themselves in dire financial straits.

Since then, the diminutive Brazilian has returned to the Premier League on loan at Aston Villa and he could end up penning a permanent deal with them.

Naturally, Coutinho will be one of many potential transfers that could happen over the summer. Erling Haaland is set to wrap up a £51.2million deal with Manchester City, pending the agreement of personal terms after passing a medical earlier this month.

Of course, football transfers take centre stage during the summer. They are keenly followed by fans as well as bookmakers across the world, who set odds on transfer specials. Some of the best betting sites in Australia, such as bet365 and Unibet will routinely update their odds on whether a player will stay or leave a club and you can tap into some decent prices.

The most expensive Englishman to feature on this list, there was a fanfare when Jack Grealish swapped Aston Villa for Manchester City last year.

The floppy-haired midfielder took time to settle at City as you can imagine, but he looks more comfortable now. He has become an indispensable part of Pep Guardiola’s starting XI, so it will be fascinating to see whether he can elevate his game to new heights next season.

link to How Much Do Bundesliga Players Make? [SALARIES REVEALED]

European football has spent the past several decades evolving into the plaything of billionaire magnates and sovereign governments. Perhaps this is none more obvious than the examples set by teams...

Continue Reading
link to Why Are Some Football Transfers "Undisclosed"? [REVEALED]

The “big name”, “big money” signing. The new player that gets the fans excited, puts bums on seats in stadiums and boosts season ticket sales. No matter what level of football you follow,...