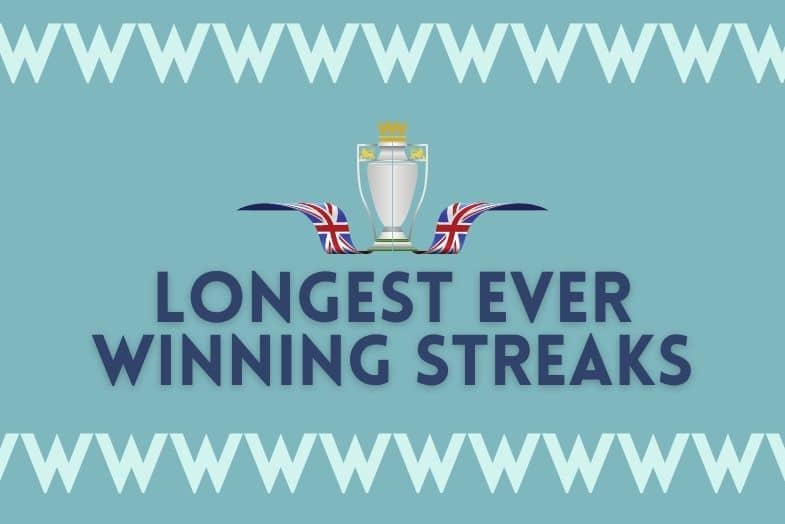 The English Premier League is regarded by many observers to be the best and most competitive league in world football.

That being the case, you would think that clubs – and even the top clubs – would be happy if they managed to string together a handful of consecutive wins.

But while some sides are delighted if they earn back-to-back victories a couple of times over the course of the season, those in contention to win the league have to set their sights a little higher.

So, which teams have gone on the longest winning streaks in the Premier League, the kind of run that can often take them a long way towards winning the title?

Let’s have a look at the teams that have been best at settling for nothing less than a win.

What is the Longest Win Streak in the Premier League?

The longest winning streak in the Premier League is 18 matches – equivalent to almost half a season – by Manchester City in 2017/18 and Liverpool in 2019/20. Unsurprisingly, both sides went on to win the league title in those seasons.

Arsenal racked up 14 wins on the trot back in 2002, including winning their final 13 matches of the 2001/02 season on their way to winning the title by seven points from Liverpool in second.

They completed a league and cup double that season by defeating Chelsea 2–0 in the FA Cup final in May. The winning streak was brought to an end with a 2–2 draw against London rivals West Ham on 24 August 2002.

The 2018/19 season was a historic one for Manchester City, as they completed a clean sweep of the three English domestic competitions – the Premier League, FA Cup and League Cup – and also won the traditional season curtain raiser, the Community Shield.

This was the first time any club had held all four of England’s main football trophies at the same time.

Big-spending Manchester City’s Premier League winning streak was halted early the following season by Spurs in a 2–2 home draw on 17 August 2019, and they would go on to finish second to a dominant Liverpool side in 2019/20 (more of which below).

Liverpool won their final nine league matches of the 2018/19 season as they tried to keep pace with eventual winners Manchester City in what was a thrilling climax to the Premier League season.

They only lost one league game all season – a 2–1 reverse against City – but extraordinarily still ended up as runners up with 97 points, pipped to the title by a single point.

But the Reds would have their revenge the following season when they won the league by a whopping 18 points – winning 26 of their first 27 games, drawing the other. The winning run was ended by a 1-1 draw at Manchester United in October. Following that result, the Reds then went on to win their next 18 league matches – meaning that if they had won at Old Trafford, they would have put an incredible 36-game winning streak together.

Manchester City won their third Premier League title in the 2017/18 season, with the foundation for their success well and truly laid at the start of the season, when they won 19 of their first 20 matches.

The Citizens ended the season with 100 points, the first time that triple figures had been achieved in a Premier League season, a record that remains unmatched to date.

They finished 19 points ahead of their city rivals United with a huge goal difference of +79 goals from their 38 fixtures, a difference of 33 more than next-best Liverpool.

Overall, it was a season of almost total dominance.

After being pipped to the title by Manchester City by a point in the 2018/19 season, despite winning their final nine league matches, Liverpool embarked on another amazing winning streak the following season.

They won their first eight matches of 2019/20, and after that run was ended by a 1–1 draw with great rivals Manchester United, Liverpool went on to win 18 consecutive games between October and February on their way to winning the league by 18 points.

Strangely, that winning run was brought to an abrupt end by unfashionable Watford, who comprehensively beat the Reds 3–0 at Vicarage Road on 29 February.