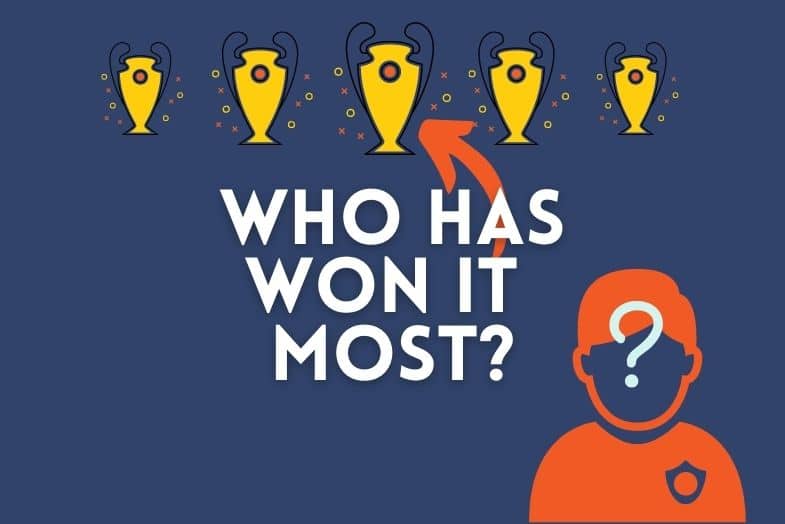 Known for being the pinnacle of club football success across Europe, the Champions League has been won by some of the game’s greatest players and managers since its creation as the European Cup in 1955.

However, despite many individuals succeeding in the competition and holding the famous silver trophy, only a few of football’s biggest icons have achieved Champions League success multiple times in their careers.

So which players have won the competition the most times? Have any players won it with two different teams? And have any players gone on to win the Champions League as a player and manager?

Join us as we go through the competition’s history and the records set by legends of the game.

Which Player Has Won Champions League the Most?

Former Real Madrid player Paco Gento currently holds the record for the most Champions League wins, being victorious in six finals for Real Madrid between 1953-1971.

Cameroon legend, Samuel Eto’o, is the only player to have won the competition with both Barcelona and Madrid as well as achieving European success with Inter Milan in 2009. Eto’o was a key member in the famous Barcelona front three that dominated the Champions League in 2009, partnering football legends Thierry Henry and Lionel Messi to victory.

Manchester United forward, Cristiano Ronaldo, is the only member currently playing to have won the Champions League five times. At 36-years-old, the Portuguese captain may be in a race against time to reach a sixth trophy in the European competition.

While some of the sport’s all-time greats have won this prestigious competition, not every Champions League winner is a footballing icon.

Which Players Have Won Champions League with Different Clubs?

Despite the competition running since 1955, then named the European Cup, only 12 players have managed to win the competition with more than one club. Clarence Seedorf holds the record after winning the Champions League with three different clubs, Ajax in 1995, Real Madrid in 1998 and AC Milan in 2003 and 2007.

Cristiano Ronaldo picked up five Champions League final victories with Manchester United in 2008 and Real Madrid in 2014, 2016, 2017 and 2018, his part in Madrid’s three-year domination of the competition earned him further praise as one of the greatest ever players in the history of football.

Daniel Sturridge is the most recent to join this list having won the Champions League with Liverpool in 2019. The English forward had previously won the competition with fellow Premier League side Chelsea in 2012 when the Blues beat Bayern Munich 4-3 on penalties.

Which Manager Has Won Most Champions League Titles?

Only three managers have won the Champions League on three different occasions in the competition’s history, with Bob Paisley, Carlo Ancelotti and Zinedine Zidane achieving the impressive feat.

Paisley famously won the competition with Liverpool in 1977, 1978 and 1981. Spending over 50 years with Liverpool as a player and manager, he is regarded as one of the greatest British managers of all time.

Italian manager Carlo Ancelotti is the only one of the three managers to have won the champions league three times with two different teams, reaching success with AC Milan in 2003 and 2007 as well as Real Madrid in 2014.

Zinedine Zidane is the most recent of the three managers, winning the competition three years in a row with Real Madrid in 2016,2017 and 2018. The former Madrid star is also the only Frenchmen to manage a Champions League-winning side, further cementing his status as a legend of the game.

Which Managers Have Won Champions League with Different Clubs?

Ernst Happel was the first to achieve this feat, winning the competition with Feyenoord in 1970 and then Hamburger in 1983. Jupp Heynckes is the most recent manager to have won the competition with two different sides. The German led Real Madrid to victory in 1998 before winning once again with Bayern Munich in 2013.

Jose Mourinho’s incredible European wins with FC Porto in 2004 and Inter Milan in 2010 helped carve the Portuguese manager’s name in football legend. Ottmar Hitzfeld dominated German football by winning the European Cup with rival sides Borussia Dortmund in 1997 and Bayern Munich in 2001, the only manager on this list to win the competition with two rival clubs.

Who Has Won Champions League as a Player AND Manager?

Seven men have won the Champions League as both a player and manager in their career. Miguel Muñoz, Giovanni Trapattoni, Johan Cruyff, Carlo Ancelotti, Frank Rijkaard, Pep Guardiola and Zinedine Zidane have all won the competition on and off the pitch.

Muñoz became the first of the seven after leading Real Madrid to European glory in 1960 as manager. The former Madrid captain had previously won the first two editions of the European Cup, cementing himself in Spanish football history as a Madrid legend.

The most recent manager to win the Champions League as a player and manager is former Real Madrid star Zinedine Zidane who won the 2002 final, scoring a memorable winner against Bayer Leverkusen. The Frenchman would then go on to manage his former club to further success, winning three consecutive Champions League finals between 2016-2018.