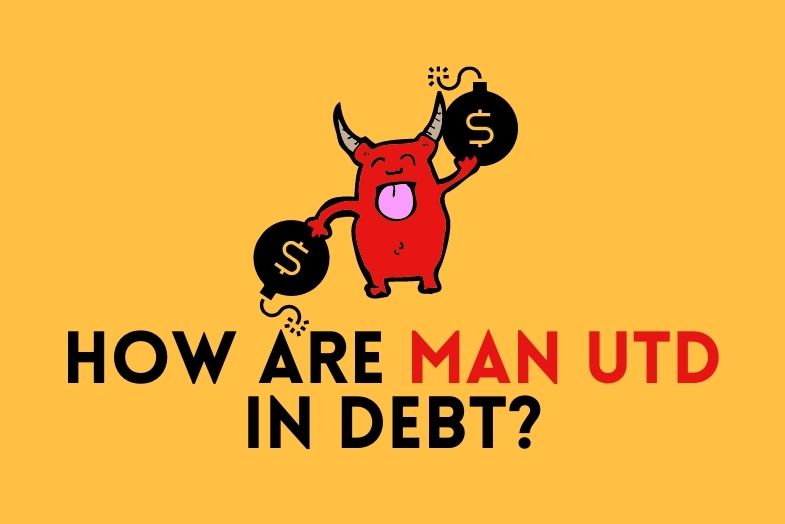 The numbers tossed around in the world of football are truly awe-inspiring. From transfer fees and player wages, to club debt, most people who watch the beautiful game can’t fathom such amounts of money.

One common thread in the Premier League for over a decade has been the words “Manchester United” and “debt.” It’s not just them. Other clubs like Liverpool, Arsenal and others are in plenty of debt themselves.

And it’s not just the Prem either. The two most valuable clubs in world football are Real Madrid and Barcelona. Guess what? They too are up to their eyeballs in debt.

So how does this all work?

How Much Debt Are Man Utd In?

Like several clubs in the Premier League, Manchester United are several hundreds of millions of pounds in debt. As of 2021, the total club debt had inflated to over 500 million pounds.

According to Deloitte, Manchester United saw a decline in revenue for the 2019/20 season which caused a significant decrease in their cash balance (£264m) in addition to increasing their debt.

The Red Devils seem to have been in debt from its early days. In 1902, the club was served a winding-up order to begin the liquidation process due to its £2,670 in debt. Today, that would be the equivalent of £300,000. Purchasing a football club was much more affordable back then!

Why Are Manchester United in Debt?

Manchester United are in debt because their current owners leveraged debt to buy the club. When the Glazers acquired control of the club in 2005, most of the money to make the purchase was via loans. This debt was then transferred to the club once the sale was complete.

Like all clubs, Manchester United’s finances fluctuated somewhat from year to year, but with revenues on the rise. Well, this was at least the case until the 2019/20 season in which all Premier League clubs experienced a decrease in total revenue.

Does Manchester United Make a Profit?

Year by year, Manchester United brings in the highest revenue of any team in the Premier League and is near the top of all clubs in Europe. However, the club has also been in debt since Glazers took over a controlling stake in the club.

Hundreds of millions of pounds come in every year from TV and sponsorship deals. And a large percentage of that money goes increasingly into the player’s pockets. After all wages, loans repayments and all other operating expenses have been paid, anything left is considered profit.

If the total revenue cannot cover expenses, then the club must borrow money. In many instances in the Premier League, the club owners can provide a “soft loan” to the club. This means they are putting their own money into the club with no fee or interest included.

For clubs with cash-poor owners, bank loans with fees and interest are the only option. When a club borrows money in a fiscal year, they are doing it to offset financial losses. The list of clubs in debt is only too long.

In this table, the effects of the COVID-19 pandemic can easily be seen. Because of the loss of revenue league-wide, teams like United have been unable to defray the preexisting expenses of wages and other costs.

How Did the Glazers Buy Manchester United?

The Glazers bought Manchester United piece by piece gradually increasing their amount of shares until they owned controlling shares of the club. The capital they used to accomplish mostly came from loans. Hundreds of millions of pounds in loans were secured against the club’s assets.

Malcolm Glazer initially had a 3.17% share in the club in 2003. By October 2004, he had increased his shareholder stake to nearly 30%. He acquired John Magnier and J.P. McManus’s 28.7% stake began a takeover club of the bid.

Soon the club was delisted from the stock exchange and the remaining minority shareholders were squeezed out. The total cost of the club was estimated to be around £800 million.

To finance buying the club, Glazer pulled capital from a combination of loans. Loans secured against the club’s assets would incur over £60 million per year. The other loans were the much riskier and costly payment in kind (PIK) loans.

How Much Do the Glazers Take Out of United?

The Glazers would have been unable to buy the club without taking out the loans with attached and accumulating interest. This means that the club has lost an average of nearly £69 million per year under the Glazer ownership.

Is Manchester United in Financial Trouble?

Manchester United has been in hundreds of millions of pounds of debt since the Glazers took over. However, the club is not in financial trouble as it consistently generates the highest revenue in the Premier League. Forbes has estimated the value of the club to be worth over £3 bn.

Premier League clubs like Manchester United can be in debt but still make a profit. As long as they don’t have consecutive years at a loss, they will not have to worry about Financial Fair Play regulations. Supporters would like to see the club get out of debt as soon as possible. That way more money can be invested in the club.

With crosstown rivals Manchester City filling up the trophy cabinet, you can’t blame the supporters for wanting more from the Glazers.