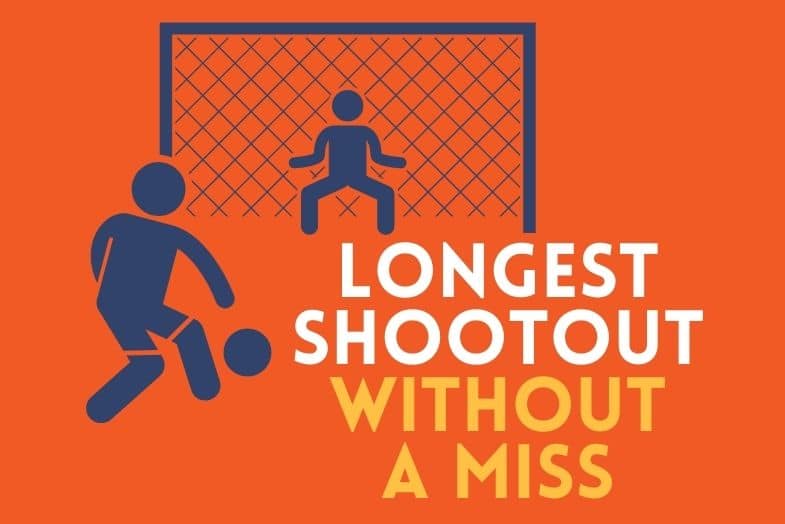 Since its introduction in 1970, penalty shootouts have sparked major debates amongst football fanatics. While the casual fan simply loves it for its guaranteed drama, some of the purists loathe the idea of determining the fate of a major competition through a game of “lucky guessing”.

Nonetheless, football matches can’t last forever, and in the knockout stages, a winner must emerge at the end of the day. So if neither side succeeds in tipping the scale in its favor during normal and extra time, then we have no option but resorting to penalties.

But what if the shootouts turn out to be an equally-contested affair with neither side missing the target? What happens when all 22 players score from the spot? And what was the longest ever shootout without a miss?

What Happens if All 22 Players Score in a Penalty Shootout?

If all 22 players score in a penalty shootout, sudden death rounds continue until someone misses from the spot while their opposite number successfully converts their shot.

Since all players have already taken a shot at this point, a new round begins with players shooting for the second time. But as we mentioned above, the sudden death rule is still applicable, unlike the initial round where at least five players must shoot for each side.

It’s also worth noting that the order of second round doesn’t have to be similar to the the one adopted in the first round. Hence, a player who took the fifth kick in first round might become the primary choice on the replay.

What Happens if No-One Misses in a Penalty Shootout

Penalty shootouts must go on until someone misses a spot kick while their opponent scores on the same round.

As we all know, the original phase of the shootouts is composed of five kicks for each team. If all ten initial shooters manage to convert from 12 yards, then we move to sudden death, based on a single shot for each side. At this point, teams must choose a 6th penalty taker, then a 7th, and so on, until the score is settled.

If all 22 players score, then the sudden death kicks continue with players taking their second kicks in the shootouts.

Can a Penalty Shootout Go On Forever?

In the applicable laws of the sport, no rule prevents penalty kicks from going on indefinitely. This is a similar case to a tennis game.

However, common sense suggests that at some point, a certain player will end up missing the target, or a goalkeeper will be able to pull off a save and subsequently put the match to bed.

Longest Penalty Shootouts without a Miss

It is believed that the longest penalty shootout that went on without a miss was the one contested between Brockenhurst and Andover Town in a Hampshire Senior Cup match that took place in October 2013, which might come as a surprise for some considering England’s abysmal shoutout record on the international stage.

While this match is officially recognized as the British record holder for the most penalty shootouts without a miss, it’s also claimed to be a world record.

Now as we all know, the lower tiers arguably enjoy a bigger exposure in England than in any other country, and even amateur league results find their way to the archives.

Therefore, it’s almost impossible to determine who actually holds the world record, but let’s say that Brockenhurst and Andover can enjoy the recognition until proven otherwise.

On the 9th of March 2022, two teams that compete in England’s Northern League Division Two set a new world record for the highest penalty shootout score, with Washington FC beating Bedlington in 25-24 after 27 rounds of shootouts.

Amongst the 54 combined kicks, only five were either saved or missed the target, while 49 were successfully converted, which is relatively higher the general conversion rate.