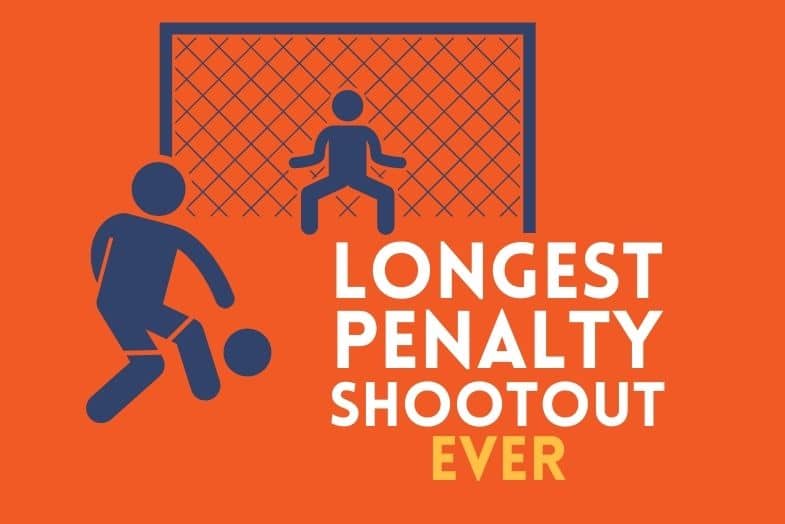 Nail-biting, intense and often a football supporter’s worst nightmare, a penalty shoot-out is the ultimate final showdown between two sides who cannot find a way to win the game in open play.

But which penalty shootout took the longest? And how many penalties were taken?

Most Penalties in a Shootout

With an incredible 54 spot-kicks, the world record for the most penalties in a shootout belongs to English clubs Washington and Bedlington. The two English tenth tier sides made history in 2022 at the Ford Quarry Football Hub as Washington won 25-24 following a 3-3 draw.

The Guinness World Record was previously held by Nambian sides KK Palace and Civics, enduring for 48 attempts in the 2005 Namibian Cup. Civics would eventually win the shootout 17-16 setting a world record for 17 years.

The longest penalty shootout in English football is held by tenth-tier sides Washington and Bedlington who fought through a 54-effort Ernest Armstrong Memorial Cup shootout in 2022.  Following an entertaining 3-3 draw, the two sides went 27 rounds through the sudden death shootout with Washington picking up a 25-24 win.

This shootout ended the world record set one year before by Old Wulfrunians and Lane Head who saw their 44 spot kicks end with a 19-18 victory to Old Wulf in 2021.

Scunthorpe United and Worcester City hold the record for the longest penalty shootout from teams in the EFL, as Scunthorpe won 14-13 from a 32 spot-kick shootout in 2014.

Besides English clubs Washington and Bedlington, who hold the world record, Greek sides Olympiacos and AEK Athens are currently runners-up for the longest penalty shoot-out in Europe after seeing 29 spot kicks scored from 30 efforts in the 2008-09 Greek Football Cup Final.

Regarded as one of the greatest Greek finals of all time, the two sides finished the game 4-4 before meeting in a dramatic shootout. Antonis Nikopolidis became the hero for his side with his performance helping Olympiacos complete a domestic double that year.

The longest penalty shootout in an international game belongs to the Netherlands Under 21’s and England Under 21’s who finished an impressive 32-effort shootout in 2007.

As England were second to take the spot-kick, Anton Ferdinand’s missed effort off the crossbar proved to be the deciding fault for England Under 21’s as they lost 13-12 to the Netherlands in 2007 Under 21’s World Cup semi-final.

While being the very first penalty shootout in a World Cup fixture, interestingly it is the joint longest shootout ever in the tournament. In 1982, West Germany beat France 5-4 after 12 spot-kick efforts were taken to decide the winner of the semi-final shootout. Alongside this fixture, Sweden beat Romania by the exact same scoreline in the 1994 World Cup, earning them a record matching victory in the quarter-finals.

West Germany’s win is often remembered more due to the excitement of the 3-3 draw leading up to the shootout and the drama from Maxime Bossis seeing his effort denied only for Horst Hrubesch to convert his penalty and clinch West Germany a 5-4 win in sudden death.