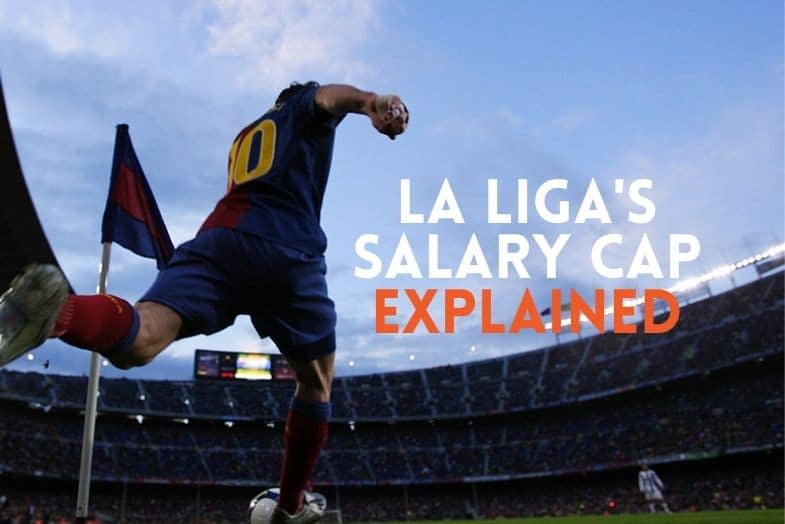 La Liga, Spain’s top flight, is no doubt considered one of the biggest leagues in world football. Home to the likes of Real Madrid and Barcelona, many clubs in Spain have enjoyed success not only in the league but also across Europe in competitions including the Champions League.

However, there is one thing within La Liga that you may not known about and that is that they have a Salary Cap. But what exactly is the La Liga Salary Cap and how does it affect its clubs? Let’s find out.

Is there a Salary Cap in La Liga?

La Liga first introduced a salary cap in 2013, with supposed purpose to protect the long-term financial health of its clubs.

In November 2020, the La Liga salary cap was reduced by more than £500million due to the impact of the Covid pandemic. It was said that both Barcelona and Valencia were likely to have taken the biggest hit out of most Spanish clubs.

In the 20/21 season, Barcelona and Valencia were expected to reduce salaries of around 40% whilst Madrid rivals Real and Atletico each having to make 27% reductions.

In November 2020,  league president Javier Tebas said: “It’s important we all understand that it will be difficult for new players to be joining the clubs. They are now looking to reduce costs. Some clubs will have to sell players or reduce their salaries. There’s no other choice.”

What does the term ‘salary cap’ mean though? Often used in professional sports, a salary cap is an agreement or rule that places a limit on the amount of money that a team can spend on players’ salaries.

Why Does La Liga Have a Salary Cap?

The salary cap in La Liga was introduced in 2013 as the league made long-term financial health a top priority. These measures were made in order to ensure responsible spending amongst clubs competing in the top two divisions, La Liga Santander and La Liga Smartbank.

Clubs from both leagues supported the decisions made and knew that by introducing the Salary Cap, this would forbid extravagant amounts of money being spent. This could then lead onto unsustainable levels of investment in transfer fees and wages.

Each club is given a salary cap ahead of each season based on their previous revenues and spending. This means that bigger clubs like Real Madrid and Barcelona are able to spend significantly more than smaller clubs who don’t generate as much money.

The COVID-19 pandemic has of course had a big impact on the salary cap, as clubs having missed out on significant revenues while playing in empty stadiums. It is this, in part, that put Barcelona in a position that they had to lose Lionel Messi in order to cut costs.

What is the Salary Cap for Barcelona?

During the summer, the Catalonians had announced the signings of Dutchman Memphis Depay, Emerson of Real Betis as well as Manchester City duo Sergio Aguero and Eric Garcia. However, due to the salary limit, they were unable to register those players unless they significantly reduced their wage bill.

One question that surrounded Barcelona’s reduced salary cap was: What would happen to Lionel Messi? Labelled the greatest player in world football, Messi’s contract at the Nou Camp was set to expire at the end of June with the club needing clear cap space to register him. As we now know, though, this wasn’t possible.

Barcelona may look at selling other players in the squad to pave the way for the Argentine. France international Antoine Griezmann is an example of a player that has been linked with a move away from the Nou Camp.

What is the Salary Cap for Real Madrid?

Real Madrid’s salary cap was reduced from just over £400 million to £253 million ahead of the 2021/22 season, which forces Los Galacticos into reducing their squad size and, in particular, their lofty wages.

Just like Barcelona, La Liga’s top club’s have been badly hit financially by the pandemic with, as mentioned before, their respective wage bills having to be cut down. Although the Catalan giants are said to be the worst affected, Los Blancos knew they had to trim down their already bloated squad.

Zinedine Zidane’s men have already offloaded some key assets with long-time club captain Sergio Ramos leaving for Paris Saint-Germain and Raphael Varane joining Manchester United. However, it is likely that those two won’t be the only players departing the club with the futures of Gareth Bale, Isco, Martin Odegaard and many others uncertain.

The idea of having the salary cap in La Liga can be considered a great way of making sure clubs do not spend excessive amounts of money which could, for example, leave them in debt. It would also make sure that the league can maintain its competitive natures at both ends of the table.

However, despite the positives, there can be numerous negative aspects that can impact the so-called ‘bigger’ sides.

Barcelona and Real Madrid have both has severely impacted by the pandemic and have had their respective wage bills reduced leaving them having to sell players to make sure they stick to the salary cap.

In this current day and age, some of the world’s best players are on enormous wages and would usually be reluctant to take a pay cut so maybe having a salary cap in football might not be such a good idea.

American sports such as the NFL and NBA have the salary cap which has proven to work very well. However, when it comes to football, it may not be seen as such a good idea.