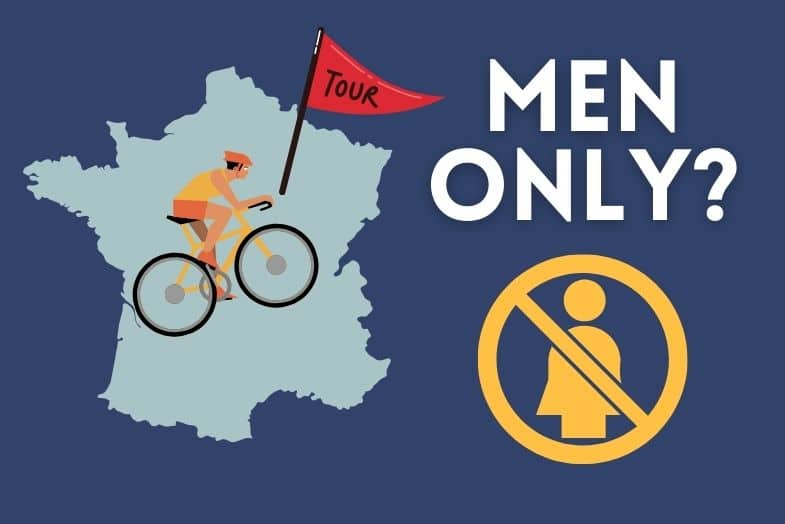 The Tour de France is the most famous cycling race in the world and its gruelling 23-day schedule pushes riders to their limits. For all of that effort, winning the legendary race does wonders for a rider’s career, with some of the outstanding candidates helping to elevate their sport to another level.

Perhaps none more so than Bradley Wiggins, who became the first cyclist to win the Tour de France and an Olympic gold medal in the same year in 2012. There are 21 stages for riders to get through, and it’s fair to say that whoever comes out on top at the end will feel like the king of the hill.

But while glory often comes to male riders, what is the story with women in the Tour de France? Are they allowed to compete alongside the men or is there a women’s Tour de France? Let’s find out.

Can Anyone Do the Tour de France?

The dream of competing in the Tour de France is reserved for teams and athletes by invitation only. Teams are invited to compete in the famous cycling race based on their rankings in the International Cycling Union rankings.

However, some wild card entries are permitted but they must have their own team car following them throughout the race. While riders are not limited by weight, their bikes must be no lighter than 6.8kg.

Is Tour de France for Men Only?

The Tour de France is a men-only annual cycling race, predominantly held in France. A similar race for women was held between 1984 and 2009 under different names and this was revived in 2014 following pressure from campaigners.

Known as La Course by Le Tour de France, this race continued to be hosted every year following 2014 but was discontinued in 2021.

How to Qualify for Tour de France

Riders must be associated with a team that ranks high enough in the International Union of Cycling standings to qualify for an invitation to the Tour de France. Some teams are invited to the stage cycle event as wild card entries but these are typically reserved for teams with good reputations.

Could a Woman Ride in the Tour de France?

As the rules stand in 2022, there is no route for women to race in the Tour de France. However, that doesn’t mean there will never be a woman in the famous bicycle race and in the future things may change.

Has a Woman Ever Entered the Tour de France?

The Tour de France is a men-only race and has been so ever since it was established in 1903. There have, however, been women’s versions of the race that have sprung up throughout history. The first cycle stage race was held in 1955 as a one-off, with the format reinstated in 1984 as an annual race until 2009.

Is There a Women’s Tour de France?

Unlike previous versions of a women’s stage race, the Tour de France Femmes is set to continue indefinitely thanks to a rich prize fund and healthy sponsorship. With the highest grand prize in women’s cycling being rewarded, €250,000, there are hopes that the pay disparity between men’s and women’s cycling can be reduced.