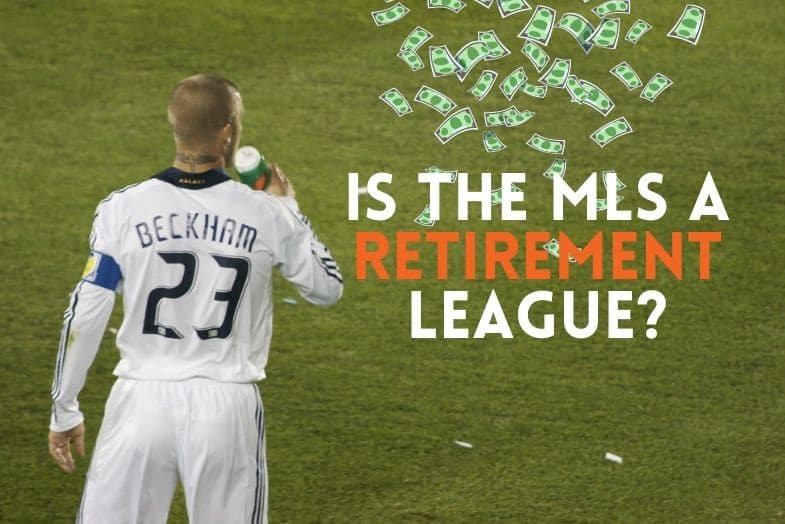 Major League Soccer, otherwise known as the MLS, has left football fans in a conundrum for years. On one hand, it’s an exciting league to support and get behind but on the other, is it really that competitive?

It gets even more complicated by the fact that football is nowhere near the number one sport in the United States.

We’re putting the MLS under the microscope and investigating whether it is a top league or if the MLS is a ‘retirement league’ for European footballers. But why is the MLS considered to be a retirement league in the first place? Is it just banter from fans of ‘superior leagues’ or is there some truth to the term?

The reason the MLS gets labelled a retirement league is the age of the foreign stars competing in it. Many of the world’s top football stars opt to end their careers playing in the MLS. It affords those formerly elite players one last big payday while experiencing American culture for a few years.

The MLS was set up in 1993 as part of the United States’ plans for hosting the World Cup in 1994. To help boost the popularity of the league, MLS franchises tried to bring in some of the biggest names in the sport.

There have certainly been plenty of high-profile European football stars playing out the twilight of their careers in America but one man made a huge difference. The introduction of David Beckham to the league in 2007 at LA Galaxy helped turn the tide for many top stars. Although past his prime, Beckham was certainly not washed up when he joined the Galaxy.

Football fans from Europe wanted to watch Beckham in the MLS and America’s sports fans wanted to see how this superstar fared against their own. Beckham showed the best players in the world that the MLS was competitive and not just a paid holiday.

Other members of England’s ‘golden generation’ like Steven Gerrard, Frank Lampard and Wayne Rooney found themselves playing in the MLS before retirement. It would be fair to say, however, that those players’ best years were well behind them by the time they landed in the MLS.

Some top talents in world football are taking their skills to the MLS in their prime. For instance, Mexico’s Carlos Vela, formerly of Arsenal, has been lighting up Major League Soccer since 2018. Vela was a once-promising talent in the European leagues and another, Giovani Dos Santos, followed a similar career path.

Dos Santos was a youth player for FC Barcelona before moving to Tottenham Hotspur in the Premier League. He moved to LA Galaxy in 2015 when he was 26, very much in the prime of his football career. The Mexican player lit up the American soccer league and earned himself a place in the 2015 FIFA Ballon d’Or longlist.

Why Do Players Go to MLS?

There are a few reasons why the MLS is an attractive proposition for some of the biggest names in football, but there is one main one; money. Top stars can earn huge paydays in America.

By signing ‘Designated Player’ contracts, top football stars are outside of the salary cap requirements. This type of contract has been nicknamed the David Beckham rule. It means players could be earning more money in the MLS than they would in a top European league.

Another attraction of the MLS for many footballers is the chance to enjoy American culture. Europe has tonnes of beautiful places but the lure of playing in cultural hotspots like New York, Los Angeles, Chicago and Miami is appealing.

Is MLS Getting Better?

Although the idea of a league getting better or worse is somewhat subjective, there are signs that the playing quality of the MLS is steadily improving. Steadily improving viewership figures alone show the development in quality and increase in support.

One of the best indicators of how good the players in the MLS are is when they make moves to larger teams in Europe. The likes of Alphonso Davies at Bayern Munich and Tyler Adams of RB Leipzig are showing what talent from the MLS can do in Europe.

Other players like Miguel Almiron and Jack Harrison are now proven Premier League-quality players after moving from the MLS.

Some US and Canadian players didn’t step foot in the MLS but are also shining among Europe’s elite. Players like Chelsea’s Champions League winner Christian Pulisic and Lille’s Ligue 1 champion Jonathan David are superb talents.

There is a consensus among MLS fans that the league is steadily improving thanks to how well its players are doing at an elite level.

How the MLS Can Keep Growing

One of the toughest obstacles for the MLS to overcome is the appeal of the USA’s other major sports. Since its inaugural season, the MLS has been steadily growing in popularity with American fans.

However, when it comes to popularity the MLS is still lagging behind the most popular and established American sports. Many of the most promising athletes choose basketball, American football or baseball over soccer.

Getting young American kids into soccer could be the secret to unlocking the MLS’ potential. Things are already changing and there is a positive increase in MLS support among American fans. According to data by Nielsen Scarborough, there was a 10% increase in MLS interest by Americans aged over 18 from 2012 to 2018.

Further proof that interest in the MLS is growing is the expansion teams added to the league. In 2020 two new teams were added, Inter Miami and Nashville, and 2021 welcomed Austin FC to the MLS. Two more teams are to join the MLS, Charlotte in 2022 and St. Louis in 2023.

With sponsorship also growing, the infrastructure is in place for the MLS to keep improving. Whether it can rival major European leagues remains up for debate but there is no denying the MLS is beginning to produce world-class players.

Will MLS Ever Be a Top League?

To become a top league the MLS requires large and consistent investment. That would mean lucrative TV deals, domestically and internationally, and huge sponsorships for franchises. Signs show the MLS could become a top league but it has a long way to go.

The MLS is known in the States for filling arenas but the next battle is to grow its TV audiences. For instance, the Premier League is the richest football league in the world thanks to its astonishing TV broadcasting deals.

With further interest in the sport from the younger generation, and a growing TV audience, the revenue will continue to grow for the MLS.

The infrastructure is already in place in the NBA and NFL to show that American sports fans will spend their hard-earned money supporting their franchises. But, if the MLS were to be considered a top league it would have to rival some of the most popular European competitions.

The best leagues in the world are the ones with the best players. Historically strong leagues like La Liga, the Premier League, the Bundesliga and Serie A are packed full of superstars. Ultimately, a lack of elite players will not be enough for many football fans to consider the MLS anything but a retirement league for stars past their prime.