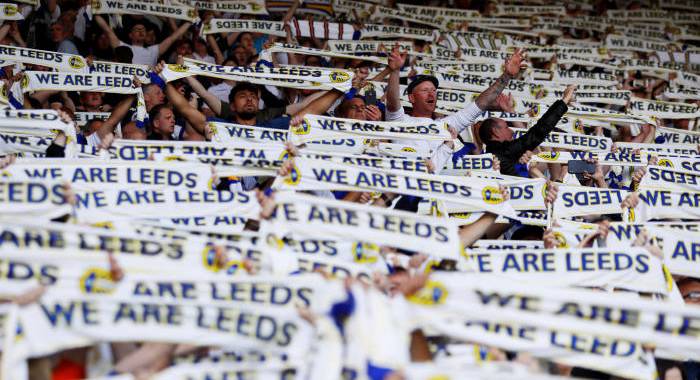 After 16 barren years of Ken Bates, Steve Evans, Dave Hockaday and everything in-between, Leeds United are finally back in the big-time.

Marcelo Bielsa and his scintillating ‘Bielsaball’ has certainly got Leeds back on track, but just through promotion, they have not yet returned to their heights of yesteryear. There’s still some way to go in that regard.

Does that make Leeds a bona fide ‘big club’? Well, their feral fan base will dwarf that of many Premier League clubs, never mind their second-tier counterparts. They’ve certainly won a fair bit of silverware in their time, too, not to mention they’re the kind of club that every football fan has an opinion on. Nobody’s indifferent towards Leeds. That always helps.

Let’s have a look at just what Leeds are below:

What Have Leeds United Won?

Quite a bit – with nine major honours (not including Championship/Second Division titles), Leeds rank joint-15th in the list of the most successful clubs in English football history.

Though, they haven’t won anything significant for a while; their 2019-20 Championship crown was their first honour of any sort since 1992.

No, but they came mightily close in that fabled 1974-75 season. With Don Revie off to manage England, in came Brighton’s Brian Clough, an unpopular choice given his feud with the beloved Revie and with Leeds as a footballing side.

But Clough’s disastrous reign, as those of you who have watched the excellent The Damned United will know, lasted just 44 days, paving the way for Bolton’s Jimmy Armfield.

Armfield could not immediately restore the league champions to their former glories, finishing ninth. But he did at least lead them on an unforgettable ride to a European Cup final, seeing off FC Zurich, Újpesti Dózsa, Anderlecht and Barcelona in the process.

Unfortunately, a date with Bayern Munich in Paris proved a step too far, as late Franz Roth and Gerd Muller goals consigned Leeds to runners-up medals.

That only scratches the surface of what happened on that night in May, though. Leeds were the better side for much of the match, were denied two potential penalties and had a goal overturned after Franz Beckenbauer convinced referee Michel Kitabdjian that Peter Lorimer had strayed offside. This caused riots among the Leeds contingent in the stands.

In facts, the violence that the riots prompted saw Leeds banned from European competition for four years (later reduced to two on appeal). But given they didn’t qualify for European football again anyway until the UEFA Cup in 1978-79, the ban was never enforced.

But the violence, which involved ‘skirmishes in the city and damage to private property’ according to journalist Geoffrey Green, as well as damaging a £50,000 camera and a lost eye and broken arm to German media workers, UEFA supposedly considered ending the competition altogether.

Still, Leeds fans remain ardent that they were cheated out of a European Cup – hence why, for years since then, they could be heard singing: “We are the champions, champions of Europe” at matches.

No, but for those who recognise that football existed before the Premier League began in 1992, Leeds have reigned over England three times in their history.

First, in 1968-69, when Revie’s men powered their way to the First Division title, setting a number of records on the way: most points (67), most wins (27), fewest defeats (2), and most home points (39). They also managed an incredible 34-game unbeaten run which extended into the following campaign, a club record they are still to surpass today.

Revie led them to a second league title in 1973-74, which saw them go undefeated until the 30th match of the season. And most recently, Leeds were champions in 1991-92 under Howard Wilkinson, pipping bitter rivals Manchester United to the crown by just four points.

Did Leeds Go Into Liquidation?

Nearly, but not quite. After a number of years of spinning the wheel in the Premier League, spending big money on big names like Robbie Keane, Robbie Fowler and Mark Viduka, relegation to the Championship in 2004 hit Leeds harder than most.

Debts in excess of £100 million had already piled up by then. Chairman Peter Ridsdale had taken out large loans of about £60 million in the hope of sustaining success after Leeds made the Champions League in 2000-01, but failure to qualify for the competition again soon after meant these loans could not be fully repaid. The likes of Rio Ferdinand and Jonathan Woodgate were sold for roughly a combined £40 million to try and keep the club afloat. Cue boardroom backlash and an on-pitch plummet.

By the autumn of 2004, after selling or releasing many of their remaining players from their relegation campaign, Leeds were forced to sell their training ground and stadium, Elland Road before eventually being sold to Ken Bates for £10 million in 2005.

A play-off final defeat to Watford in May 2006 was as good as it got, though. 12 months later, Leeds entered administration to avoid being liquidated, were hit with a 10-point deduction, and were relegated to League One, the third tier of English football.

Further breaches of financial rules that summer almost led to Leeds being expelled from the Football League altogether, but they were ultimately re-admitted with a 15-point deduction. It took them three seasons to get out of League One and back into the Championship, as they slowly began to rebuild under Simon Grayson as manager.

So, why did Leeds United go bust? The answer is quite simple, and one that continues to plague a number of their peers at the top of the English pyramid – they spent more than they could afford, and ultimately paid for it blow by blow.

Why Are Leeds Called ‘Dirty Leeds’?

As much for off-the-field incidents as on it, truth be told.

Were Leeds United a dirty team? Once upon a time, the answer would have been an inarguable yes. Take the clash between Everton and Leeds at Goodison Park in November 1964, for instance. Billy Bremner took Everton’s Fred Pickering out within seconds of kick-off. Then there was a lunge by Johnny Giles on Sandy Brown which saw the latter exact retribution which earned him a red card.

Still the challenges that day flew in. At least, until eventually, referee Roger Stokes’ patience snapped, and he ordered both sides off the pitch with a few minutes of the first half still to play. Both sides were slammed in the press for ‘thuggish behaviour’ after the match, which Leeds won 1-0.

Indeed, ‘Dirty Leeds’ was more of a media construct than anything else. From the 1963-64 season which saw Revie’s men promoted to the First Division, a disciplinary table of every club in the country was published, branding Leeds the dirtiest.

But if Leeds were as aggressive and rough as they came on the pitch, there was certainly at least a militant fringe of their support which matched them in this department off it.

In an age where hooliganism was rife in football, particularly the 1970s and 80s, Leeds’ fan base, though certainly large, was regarded along with the likes of Millwall and West Ham as the most thuggish. This, of course, played into the stereotype of ‘Dirty Leeds’ perfectly, and if anything only perpetuated it.

So… Are Leeds a Big Club?

There’s been a lot of talk since Leeds’ promotion about how it’s good to have them back in the top tier, that they’ve returned to their rightful standing in English football, that the Premier League is all the better for having Leeds in it.

That, of course, is a fair point – and there’s certainly a number of the 20 top-flight clubs this season whose history or prestige cannot hold a candle to Leeds’. Interestingly, a 2016 study regarded them as the 12th-biggest in England, for that matter.

Away from trophies, this is a club that has a far more global appeal than many others in England, that constantly boasted the large average away following in the Championship and sells out a near-38,000-seater stadium in Elland Road.

These have been dormant years for Leeds; in some ways, as alluded to at the start of this piece, promotion under Bielsa is only the first step on their way back to where they once stood. An enormous, vociferous support, a winning team, if maybe not yet a ‘big team’; Leeds are a big club, but had been one of England’s biggest sleeping giants for too long before Bielsa eased them out of their slumber.

One thought on “Is Leeds United a Big Club?”