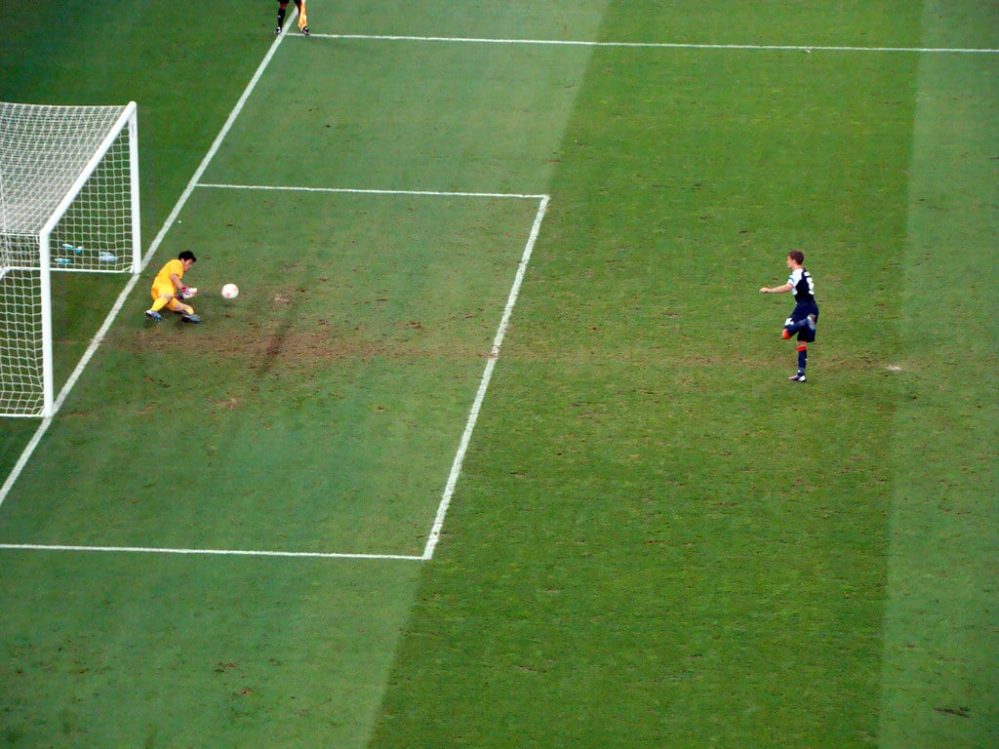 On paper, it shouldn’t be anything close to difficult. One kick of the ball, aimed at a large net, with just one other human being as your only obstacle. And yet, penalties in football are often the ultimate pressure-cooker.

Germany seem to have the hang of them; England, though, less so. But let’s look at some penalty shootout stats now to find out if the Three Lions are really as bad as they’re often said to be at spot-kicks, as well as who has the best and worst records at them at international level and more.

Which International Team Has the Best Penalty Shootout Record?

Let’s look at this, taking into account World Cups and each continent’s major tournament:

Two countries are tied for the most penalty shootout victories in World Cups – Germany and Argentina on four each.

Germany have a 100 per cent record, winning in all four of their World Cup shootouts – against France in the 1982 semi-finals, Mexico in the 1986 quarters, England in the 1990 semis, and Argentina in the 2006 quarters.

That 2006 defeat was Argentina’s only loss, though. They’ve won the other five of their six World Cup penalty shootouts – two in 1990, against Yugoslavia and Italy in the quarter-finals and semi-finals respectively, before knocking England out in the second round on penalties in 1998, then the Netherlands in the 2014 semis and the Netherlands once again in the 2022 quarters.

Two countries also share the most spot-kick wins in the Euros – Italy and Spain – with four wins each.

Italy have had a very mixed penalty shootout history at the European Championships, having also lost on penalties three times. But in 2021, they won their semi-final (ironicially against Spain) before beating England on penalties in the final at Wembley.

Despite their terrible World Cup penalty shooutot record, Spain have triumphed in three out of their four Euros shootouts, meanwhile – they saw off Denmark in the 1984 semi-finals, Italy in the 2008 quarters, and Portugal in 2012 semis, but did lose to England (yes, really…) in the 1996 quarter-finals and Italy in 2020.

Brazil and Argentina have each played in nine penalty shootouts in Copa America, with Brazil having a narrowly better record having won five (56%) of their shootouts compared to Argentina’s four (44%).

Though, Brazil have also lost four other Copa America shootouts, too – to Argentina in the 1993 quarters, to Uruguay in the 1995 final, and twice to Paraguay (2011 and 2015 quarter-finals).

Three-time Asian Cup winners Saudi Arabia also hold the record for the most penalty shootout victories in the competition with four.

Each time they’ve become champions, they won shootouts en route – in the 1984 semi-finals against Iran, in the 1988 final versus South Korea, and then twice in 1996 (against Iran in the semis and United Arab Emirates in the final).

Five-time Africa Cup of Nations champions Nigeria have also won as many shootouts in the tournament – a competition record. They also boast the most consecutive spot-kick wins with three, too.

One of their successful AFCON campaigns involved a penalties victory on the way – against Ivory Coast in the 1994 semi-finals. The others were versus Egypt and Algeria in the 1984 and 1988 semis respectively, and Tunisia and Zambia in the 2006 and 2010 quarters respectively.

The record for most shootout victories in the main tournament for North and Central America and the Caribbean belongs to Panama, who have also contested the joint-most along with the USA with five.

Of those five, Panama have won four, and also hold the accolade for most wins in a single tournament (two) and most successive spot-kick triumphs.

Panama, who have never actually won the Gold Cup, have seen off South Africa (2005 quarters) and El Salvador (2011 quarters) from 12 yards, as well as Trinidad and Tobago and the USA, both in 2015 in the quarters and third-place play-off respectively.

That USA defeat was somewhat an act of revenge; America had inflicted Panama’s only Gold Cup penalties defeat on them in the final ten years earlier.

And for the main tournament contested by members of the Oceania Football Confederation, the OFC Nations Cup, there has only ever been one shoot-out. – Best Penalty Records

Created in 1973 and often played as a round-robin league between six to eight teams, the ten OFC Nations Cup tournaments have only ever seen one set of spot-kicks.

That was in June 2016, when New Zealand beat Papua New Guinea 4-2 on penalties following a goalless draw after extra time to clinch their fifth Nations Cup title.

Indeed, the only other countries to ever win the Nations Cup are Australia (four times, no longer a part of OFC) and Tahiti (2012).

Which International Team Has the Worst Penalty Shootout Record?

Now, let’s do the same, but looking at the countries who’ve lost the most in each of these competitions:

Spain have the world World Cup penalty record having lost four of their five shootouts.

However, England, Netherlands and Italy closely follow them having lost three of their four World Cup shooutouts.

England have failed in three out of four, losing to West Germany in the 1990 semis, Argentina in the 1998 second round and Portugal in the 2006 quarters, but did register their first spot-kick victory in 2018 when they beat Colombia from the spot in the second round.

Italy have the exact same record, going out on penalties in three successive World Cups – to Argentina in the 1990 semis, Brazil in the 1994 final, and France in the 1998 quarter-finals. They at least exacted revenge on France eight years later, though, when they won their first World Cup shootout in the 2006 final itself.

England have the worst European Championship penalty record, having lost four times on penalties. The most recent of which was a defeat in the final against Italy. They also lost to Italy in 2012, as well as against Germany in the semis in 1996 and to Portugal in 2004.

Two other teams have also lost three penalty shootouts – and there’s a similar pattern to that of defeat World Cup teams.

One is Italy, who were beaten from 12 yards in the Euros against Czechoslovakia in the 1980s third-place play-off, followed by Spain and Germany (remember *that* Simone Zaza penalty?) in the 2008 and 2016 quarters respectively. They’ve at least won two, though, against Holland in the 2000 semis and England in the 2012 quarters. Nobody has contested more Euros shootouts than Italy with five.

Then there’s Holland who, aside from also losing to Italy in Euro 2000 (which they hosted), also failed against Denmark in the 1992 semis and France in the 1996 quarters. Like England, they’ve only won one Euro shootout; versus Sweden in the 2004 quarters.

England have the record for the most successive Euros shootout defeats with four.

Another tie for this one – between Argentina and Uruguay, who have both lost five shootouts in this tournament.

Argentina have also won three, but have lost twice to Brazil (1995 quarters, 2004 final), twice to Chile (2015 and 2016 finals), and also once to Uruguay in the quarter-finals of the 2011 tournament which Argentina hosted.

Uruguay have also suffered the most successive Copa America shootout defeats with three – against Honduras in the 2001 third-place play-off and twice to Brazil (2004 and 2007 semis), but put that to bed with that Argentina victory in 2011.

Their other defeats were at the hands of Colombia and Peru in the 1993 and 2019 quarters respectively, but have at least won four Copa America shootouts of their own. Along with Brazil, no country has contested more than their nine, in fact.

Not only have Iran faced the most Asian Cup shootouts (eight), they’ve also lost the most (six) and suffered the most consecutive spot-kick losses in the tournament’s history (three).

The three-time winners lost from 12 yards twice in 1984, against Saudi Arabia in the semis, and Kuwait in the third-place play-off, before losing to Saudi Arabia again in the 1996 semi-finals.

They’ve since lost on penalties to China in the 2004 semis, and South Korea and Iraq in the 2007 and 2015 quarters respectively. They haven’t won an Asian Cup shootout since 1996, either.

Like Iran in the Asian Cup, Ivory Coast hold the record for the most penalty shootouts contested in the AFCON (nine), as well as the unwanted title of the most defeats (five).

But on the two occasions that they’ve won the AFCON, Ivory Coast have triumphed on penalties in both finals, against Ghana in both 1992 and 2015. They also saw off Cameroon from 12 yards in the 1992 semis and the 2006 quarters.

It’s a 100 per cent record as far as Costa Rica are concerned – for penalty shootout defeats in the Gold Cup, that is.

The record for most consecutive penalty defeats in the Gold Cup is also held by Costa Rica (three), who have won the competition three times but not since 1989.

It seems unfair to call them the worst, but given they lost the only shootout the competition has ever seen, you perhaps have to award that title to Papua New Guinea as far as the OFC Nations Cup is concerned.

Well, Jordan Henderson might be judging by England’s friendly win against Romania, but if you’re there thinking ‘Why are England so bad at penalties?’, the answer might surprise you.

Yes, their shootout record in major tournaments is pretty abysmal, with three wins out of nine, but in April 2020, a new study carried out in Germany found that England had scored roughly 90 per cent of their penalties taken during a game. Since then, they’ve been awarded six penalties at time of writing and have scored five of them.

What’s alarming, though, is that England’s success rate from the spot in shootouts drops to about 60 per cent – which points to it being a mental problem as much as anything.

Compare that to Germany, who performed 10 per cent better in shootouts at major tournaments (85.2 per cent) than they in ‘normal time’ in matches (75 per cent).

That said, it’s worth mentioning ahead of Euro 2020 that England have won their two most recent shootouts in major tournaments – against Colombia in the 2018 World Cup, and versus Switzerland in the 2019 Nations League – so perhaps, slowly but surely, their resolve from 12 yards is hardening under Gareth Southgate.