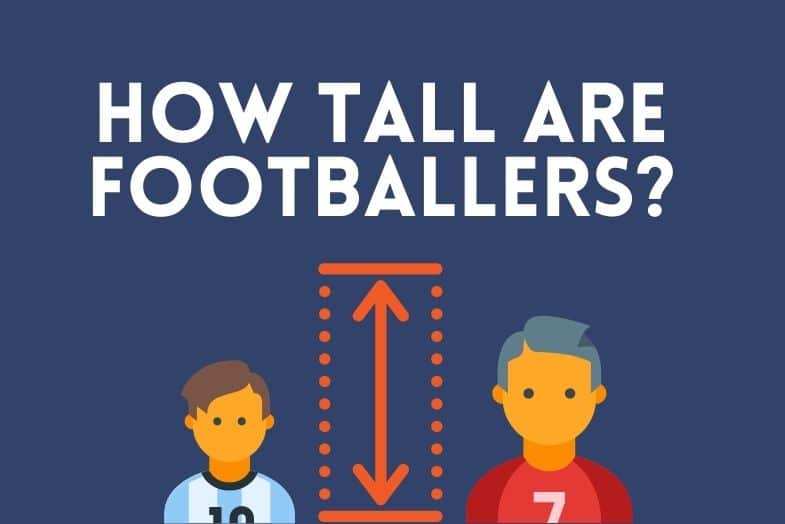 In almost every sport, people with certain genetic traits gain innate advantages. Perhaps this is not more true than in that of America’s National Basketball Association where the players seem to become taller and quicker with every generation.

But football is the most popular sport in the world. The beautiful game is for everyone. And many of the best to ever play the game were bog-standard in height and weight when compared to males worldwide.

But as the game evolves, we can see the height and body-type trends for each position. And if you really watch the matches, it mostly makes sense. Right?

Height in football affects how easily outfield players can head a ball and see over walls for free kicks. Typically, defenders and target men are taller than midfield and wide players. Goalkeepers are typically taller than outfield players, with longer reaches so that they protect their goal.

How Tall Are Goalkeepers?

Professional goalkeepers are typically over 6 feet in height if not taller. The average height in the English Premier league is around 6ft 3in. Some world goalkeepers are 6ft 8in or taller.

Danish footballer Simon Bloch Jørgensen is a massive 6ft 10.5in! And Belgian footballer Kristof Van Hout is just below him at 6ft 10in. In English Premier League history, Thibaut Courtois is among the tallest at 6ft 6.5in

Costel Pantilimon at 6ft 8in was the tallest to ever play in England’s top division.

What is the Minimum Height for a Goalkeeper?

There is not a minimum height requirement for goalkeepers. Agility and athleticism can make up for a lack of reach. But the smaller the person, the more difficult it is to make it to the professional levels. It is rare to find goalkeepers shorter than 6 feet tall.

Jorge Campos was only 5ft 6in but long and successful career as a goalkeeper including 130 appearances for the Mexican national team.

In the 2020/21 Premier League season, the shortest goalkeeper to make it onto the pitch was Mathew Ryan of Arsenal at a height of only 6 ft 0 in. However, that height still puts Ryan in the top third of the global population!

He was joined by Jed Steer of Aston Villa and Fulham’s Fabri who also made appearances in the EPL 6 ft goalkeeper’s club.

Are Goalkeepers Getting Taller?

It is hard to tell globally if goalkeepers are getting taller. In England, the average goalkeeper height has risen nearly 1 inch since 1997. This could be related to rising global average heights. But it is more likely to earlier and highly specialized recruiting for goalkeepers.

How Tall is the Average Goalkeeper?

Goalkeepers can range in height. Rarely will they be shorter than 6 ft 0 in. And several are 6ft 8in or taller! In the English Premier League, the average height of goalkeepers was 6ft 3.2 in for the 2020/21 season.

How Tall Are Defenders?

In football, central defenders are usually taller than other outfield players. They need to be able to reach airborne balls and head them away from their goal. They also need to battle with typically tall attacking target men for these crosses. Wingbacks are normally of average heights.

How Tall Are Centre Backs?

Centre backs in the top world football leagues are often taller than 6 feet by several inches. While the smaller centre backs are typically just below or at a height of 6 feet.

Norwegian and former Fulham FC player, Brede Hangeland was famed for winning crosses in his own third at 6 ft 6.5 in.

However, winning crosses and aerial duels isn’t just about height. It’s also about will and timing. Barcelona won just about everything imaginable with players like Javier Mascherano (5 ft 8.5 in) and Carles Puyol (5 ft 10 in).

How Tall Are Full Backs?

Many speedy and notable fullbacks like Dani Alves (5ft 7.5in), Kieran Trippier (5ft 8in), and Marcelo (5ft 9in) are well below 6 feet in height. Others like Gareth Bale and Ivan Perisic, both 6ft 1in, have played at fullback during their careers.

How Tall Are Midfielders?

Midfield players are the shortest players on the pitch on average. They are usually several inches shorter than target forwards, central defenders, and goalkeepers. Because midfielders are lower to the ground, they expel less energy and are quicker with the ball as long as it stays on the ground.

How Tall is the Average Midfielder?

Across the globe, midfielders are shorter than most other positions on the pitch. In the Premier League, midfielders have an average height of 5ft 8.5in.

Attacking midfielders like Pelé (5ft 8in), Luka Modric (5ft 7.5in), Phillipe Coutinho (5ft 7.5in) are right around the average height for their position. Marco Veratti of PSG (5ft 5in) and N’ Golo Kanté of Chelsea (5ft 6in) are among the smallest and most successful at their position.

How Tall Are Strikers?

Strikers can be tall or short. It depends on if they are wide, central or target men. The wide strikers are generally shorter and quicker. And the target forwards are typically taller to match the heights of opposing centre backs. In the Premier League, the average striker is just under 6ft 0in tall.

Prolific strikers like Cristiano Ronaldo and Robert Lewandowski are both 6ft 1in tall. On opposite ends of the spectrum are Zlatan Ibrahimovic (6ft 5in) and Lionel Messi (5ft 7in). But Italian players Lorenzo Insigne and Sebastian Giovinco take the cake ringing in at just 5ft 4in.

What is the Smallest Position in Football?

The smallest position in football on average is the midfield. In the Premier League, midfielders average a height of just 5ft 8.5in. However, fullbacks and attacking wide players can be short as the pace is premium at those positions.

Andy Ducros of Coventry City and Bournemouth’s Ryan Fraser have both plied their trade as the smallest attackers ever in the Premier League at 5ft 4in!

What is the Tallest Position in Football?

The tallest position in football is the goalkeeper. At this position, height is highly correlated to reach and the ability of a keeper to cover their goal. Goalkeepers need to be able to reach all areas of their goal in milliseconds. But there is no need to possess high agility and pace.

What is the Average Height of a Footballer?

In a survey of top European football clubs, the average height was 182 cm or just under 6 feet in height. This is much taller than the worldwide average of 5ft 9in for men.