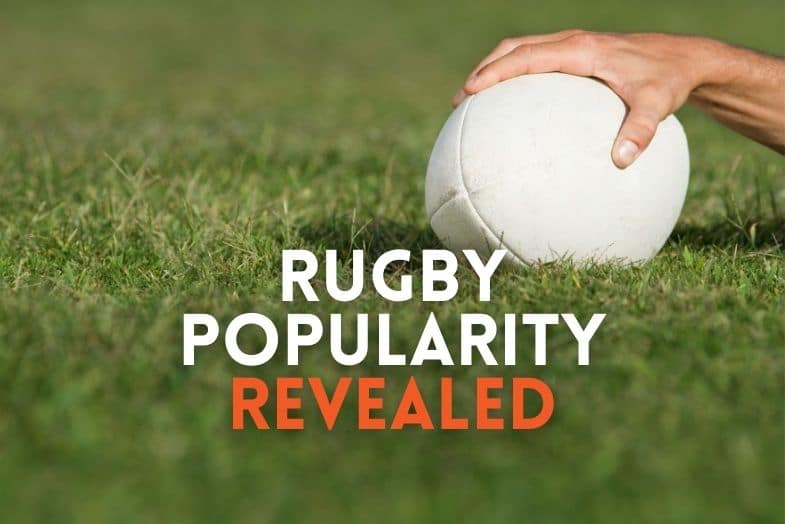 Created in 1823 after a young William Webb Ellies infamously picked up the ball and ran with it in his arms during a football game at school, rugby has developed into one of the most popular sports in the world.

As millions watch the international competitions on television, the popularity of the sport has been able to skyrocket in the modern era, allowing thousands of players to join the field every year in the United Kingdom alone.

However, despite its recent growth, rugby has always struggled to meet the popularity levels of other sports such as football and boxing, with both sports having benefited greatly from the use of modern-day television rights and social media following.

So how popular is rugby across the world? And are there signs that its popularity will grow?

How Many People Play Rugby?

There are currently over 6.6 million registered rugby players in the world, roughly 2 million more than the entire population of Ireland – one of Rugby union’s most successful nations.

With over 180 thousand rugby union clubs across the world, the sport has been able to grow in popularity, consequently attracting more players to compete at higher-level competitions.

In England alone, there are over 2000 clubs, the highest percentage in the entire world. In 2021, rugby was ranked as the third most-played sport behind tennis and the most popular – football. This ranking is set by some distance as tennis has over 700,000 regular players in England.

Is Rugby a Popular Sport?

Rugby is considered to be one of the most popular sports in the world on several varying metrics with the Japan 2019 Rugby World Cup final recording over 857 million viewers, the highest viewership of any televised rugby event in history.

Global viewership is a clear way to view a sport’s popularity on a worldwide scale. With rugby estimated to have over 400 million fans, it ranks as one of the top ten sports in the world for the size of fanbase with the majority of its support base located in Europe.

Countries that have succeeded in rugby also have a strong fanbase for the sport such as New Zealand and South Africa. They have been able to grow into some of the most talented teams in the world.

England, France, Ireland, New Zealand, and South Africa are commonly regarded as the most prolific consumers of the sport due to viewership numbers and the number of people who play the sport in the individual countries.

Prominent rugby-playing nations such as the South Pacific islands tend to have a strong following as they have been able to build well-developed domestic formats and league structures.

Why is Rugby Not That Popular?

Rugby has always struggled to overtake sports such as football in popularity because the latter’s broader appeal and simplistic origins make it a favourite for a high majority of countries across the world.

Although rugby hit an incredible milestone when 857 million people watched the Japan 2019 World Cup final, this still didn’t come near the 3.5 billion that watched the 2018 football World Cup (almost half of the entire planet’s population).

Unlike football, rugby has also struggled to gain a strong social media following which heavily affects the popularity of a sport with younger audiences. Football’s reach has allowed it to maintain the position as the most popular sport in the world with players, teams, and leagues all having social accounts that frequently engage and connect with fans on an hourly basis.

While rugby has begun to follow this trend, with most professional clubs across the world having an active social media account, the sport is still years behind other media spotlighted competitors such as football, boxing, mixed martial arts, and American football.

You only need to look at some of each sport’s top athletes on social media to reveal the giant differences in media popularity. Current rugby Player of the Year Steph Du Toit incredibly has over 2.5 million followers across Twitter, Instagram, and Facebook.

However, when comparing this to one of the top footballers in the world, Cristiano Ronaldo, the Portuguese striker has over 98 million followers on Twitter alone. Outside of the global stars in rugby, social engagement levels are relatively low, while the same can also be seen at the club level throughout the world.

Rugby has also struggled to replicate the same television deals that sports such as football and boxing have across the world, with Sky Sports’ coverage of Premier League football games earning the sport an impressive average of 1.7 million fans compared to the average rugby union viewership of 240 thousand.

Rugby’s split between league and union also adds to this struggle as it instantly divides a fan base, football has been able to avoid this issue by playing all important games across different platforms thanks to various televised deals with several companies such as Sky, BT Sport and more recently Amazon.

Is Rugby Getting More Popular?

Rugby is becoming increasingly popular across the world with viewership for the Six Nations and Rugby World Cup hitting new records yearly. Alongside the increase to 857 million viewers for the 2019 Japan World Cup final, the Aviva Premiership Rugby viewership figures continue to increase each year further showing the rising interest in the sport.

In the United Kingdom, television audiences increased by an incredible 40 percent in 2021 after rugby was moved to a subscription-based platform in BT Sport, this provides casual fans of the sport greater access while also allowing other sports fans the chance to begin following rugby through BT Sport.

A combined total of 7.8 million people watched the Aviva Premiership last year which shows a considerable increase from the 6.1 million the previous season, rugby does not have the same figures as other sports in the world but it is making the right changes to increase popularity.

Where is Rugby Most Popular?

Both countries have amassed over one million followers on social media where they have been successful in producing consistent content for sports fans on a global scale, this rise in popularity has been further enforced through players using social media, with top stars such as Ardie Savea and Maro Itoje often reacting to their country’s accounts.

Despite its position as the fifth-highest followed country on social media, France’s viewership figures have skyrocketed in recent years with the average numbers for French club rugby hitting 450-500 thousand per game.

This is considerably more than England which has a surprisingly low 240 thousand and New Zealand which has the second-highest viewership numbers per club rugby game at 430 thousand.

Rugby is also a favoured sport in many South Pacific islands as it is widely preferred in these regions to football. Papua New Guinea holds it as their national sport while countries such as Fiji have gained a large media following due to their success in recent years on the pitch.

Interestingly, Australia has just over six thousand followers on social media, one of the lowest out of the top competing countries in the world.

How Popular is Rugby in France?

Rugby has become incredibly popular in France in recent years with there being over 360 thousand players registered for French clubs in 2022. France also has the largest televised club rugby match viewership with an average of 500 thousand viewers per game.

How Popular is Rugby in the UK?

Rugby is one of the most popular sports in England with over 2000 clubs and 138 thousand players registered across the country. England also has the highest social media following of any international rugby team and gathers over 240,000 viewers per club rugby game.

How Popular is Rugby in Ireland?

Rugby popularity in Ireland has grown incredibly over the past few years with The Shamrocks having over 800 thousand social media followers in 2022 – roughly one-fifth of the national population.

How Popular is Rugby in Italy?

Rugby is steadily becoming a popular sport in Italy, with the Italian national side picking up their first-ever Six Nations win in 2022. Italy also has just over 79 thousand registered players and ranks ninth in the world for highest social media following at 163 thousand followers.

How Popular is Rugby in the USA?

With the fourth-highest number of registered players in the world (125 thousand) rugby is becoming a popular sport in America. Rugby remains far behind the popular US sports such as American Football, basketball, golf, tennis, and soccer, however, it is certainly building a rising fanbase.

How Popular is Rugby in Argentina?

Although Argentina is known for its football success, rugby has steadily become extremely popular in Argentina with the country having over 102 thousand registered players. Argentina also has the eighth largest social media following for rugby in the world at 329 thousand, further emphasising the size of its media fanbase.

How Popular is Rugby in Spain?

Rugby is still one of the less popular sports in Spain with the country only having 37 thousand players registered. With sports such as football, tennis, golf, and Formula 1 being superiorly popular, rugby may take a long time before it reaches similar fan figures in Spain.